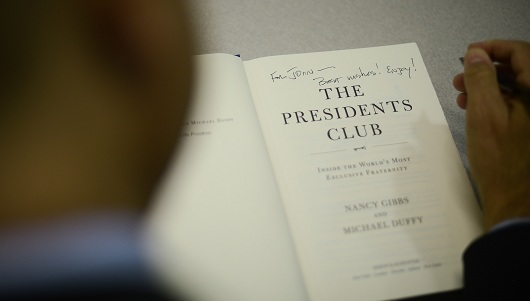 The George W. Bush Presidential Library and Museum will be officially unveiled tomorrow in Dallas, TX on the campus of Southern Methodist University. In addition to former President George W. Bush, President Barack Obama and the remaining four living former presidents will also be in attendance. Although Bush and Obama haven’t always seen eye to eye, there historically has been a willingness of former presidents to not only refrain from criticizing their successor but to also serve as a mentor and sounding board for the sitting president to seek counsel.

Last summer, BPC hosted an event with Michael Duffy, the author of The President’s Club, which examines the fraternity of former presidents and the unique bond they share. Duffy emphasized the fact that the bond between past presidents can often be stronger if they are from opposing parties, “A distinct pattern is that presidents from different parties get along better than those of the same. I think ? so you have Ford and Carter having a 25-year relationship? The same thing, obviously, between Clinton and Bush 41 and, of course, Hoover and Truman. So those tend to be more effective partnerships.”

Presidential libraries serve as a reminder of the presidents’ legacy as seen through his eyes but also leave open an opportunity for the public to pass their own judgments. The George W. Bush Presidential Library and Museum focuses on several aspects of his presidency: 9/11, the Iraq War, Hurricane Katrina?one exhibit displays all of the information President Bush had while in office and leaves it up to the public to decide, via touch screen, how they might have proceeded.

Presidential libraries can also serve as a way to humanize the president and remind the public that although the office holds great power, the president is only one person. One of the obstacles to bipartisan solutions lays in the ease with which both parties vilify members of the opposing party. The Bush Center showcases exhibits of Bush’s love for baseball as well as a display of the dog bowls from the Bush’s beloved Scottish terriers, Barney and Miss Beazley.

Despite the perceived goodwill among former presidents, tomorrow’s gathering will be the first time this group has all met since then President George W. Bush convened the group in January 2009. Perhaps this meeting can serve as an opportunity for George W. Bush and President Obama to build a relationship similar to that of Bush Sr. and Clinton’s friendship, a relationship built on respect and most importantly?teamwork.

9873
Can a gathering of presidents spark renewed friendships and teamwork in the years to come?