One key characteristic of crude oil is its density, which ranges from light to heavy. The density of crude oil?that is, how light or heavy it is compared to water?is often measured by calculating its API gravity, where higher numbers signify lighter crudes and “sweet” or “sour” designations denote the sulfur content of the crude. Lighter, sweeter crudes are generally more valuable from an economic perspective because they are less energy-intensive to refine into finished products. 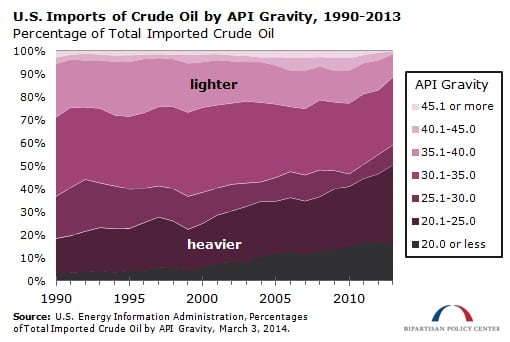 Many refineries in the United States?especially those in the Midwest and Gulf Coast regions?have additional conversion units that enable the processing of heavy crude oils.  This creates an economic incentive for these refinery operators to balance their use of these new sources of lighter, domestic crude oils with heavier foreign crude oils in order to most efficiently use their full refinery operations.

From 1990 to 2005, the average API gravity of crude oil used in U.S. refineries was decreasing, indicating that refineries were using heavier crude oils and mirroring the trend towards greater imports of heavier crudes. 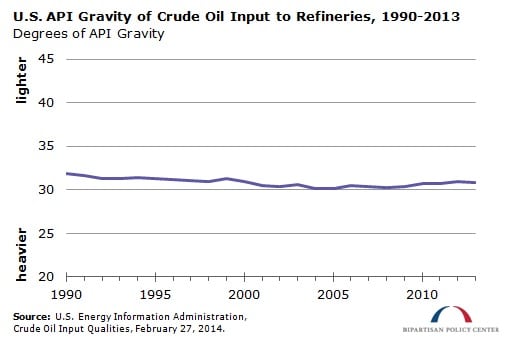 One only has to look to the fundamentals of the U.S. refinery sector to understand the drivers behind this shift.

A second driver for the shift in the composition of U.S. crude oil imports has been the resurgence of light crude oil production primarily from U.S. shale formations, which has grown by 2.3 million barrels per day since 2005 and has displaced competing imports of light crude oil causing them to decrease significantly in the last few years. 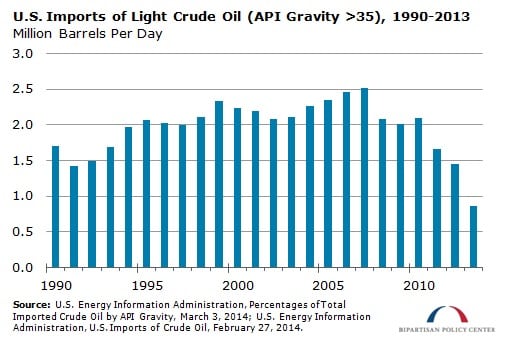 Going forward, these trends are likely to accelerate as U.S. refineries continue to demand the heavy grades of crude oil?especially those from Canada?in which they have a comparative advantage to refine and as U.S. domestic production continues to displace imports of light crude oil.

1 A crude slate is the particular choice of crude oil used.