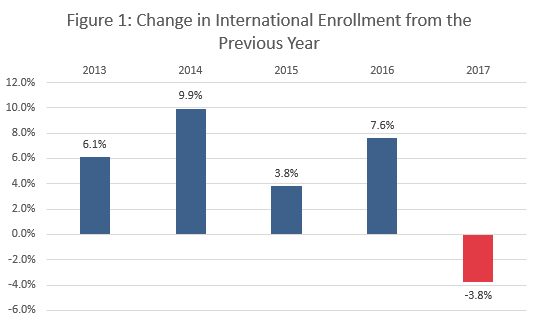 Though it is difficult to gauge what caused these declines, a survey of 522 higher education institutions conducted by the Institute of International Education (IIE) cited several potential contributing factors, including changes to U.S. immigration policy, as well as policy changes and increased competition in the international community.

The immigration system has undergone several changes in the past year. From the infamous “travel ban” to administrative changes in the visa vetting process, several countries have seen fewer visas approved or under the final iteration of the travel ban, have had their visas?including student visas?restricted. According to IIE’s survey, 68 percent of institutions cited visa delays and denials as the driving force behind declining international enrollment. In addition, the increasingly hostile rhetoric surrounding immigration from the Trump administration and members of Congress may also be playing a role in declining enrollment, though the exact impact is difficult to quantify.

Given the importance of international students for both local economies and the institutions themselves, policy makers should be keenly aware of these developing trends as well as their effects on education and the economy.

The administration is also considering student and exchange visitor policy changes that could impact foreign students. A draft proposal made public in July 2017 included provisions requiring international students to reapply for visas every year. This additional layer of paperwork would require international students to pay the $200 application fee each year, compared to the current one-time application. As BPC previously noted, the administration may cut work opportunities for J-1 visas for exchange visitors, which would likely reduce the number of individuals studying in the United States. The administration is also considering expanding oversight over the Optional Practical Training program, which allows F-1 Student and M-1 Vocational Student Visa recipients to work in the United States after their studies. Meanwhile, the administration’s efforts to restrict the issuance of H-1B visas?which authorize temporary employment for foreign workers?has been at the center of the immigration debate, and while this would not directly impact international students, some higher education advocates fear that added restrictions would disincentivize international enrollment by diminishing their career opportunities after graduation.

The Trump administration has also continued to send signals to prospective international students with the proposed budget for the State Department cutting over $300 million, or 52 percent, from the educational and cultural exchange programs. As the various court battles surrounding the travel ban progress, and Congress continues to debate both immigration reform and the budget, the rhetoric and substantive aspects of immigration policy could continue to affect international enrollment.

In 2016, Brazil also cancelled its government-sponsored Scientific Mobility Program (also known as Science Without Borders), which had offered 100,000 scholarships since 2011 to students looking to study abroad in the fields of science, technology, engineering, or mathematics. Removing this scholarship contributed to a 32 percent decline in Brazilian enrollment in the United States. Enrollment has also decreased among students from Hong Kong (5 percent), South Korea (4 percent), and Japan, the United Kingdom, and Turkey (less than 2 percent each) since 2015.

Additionally, international competition in the higher education space has intensified in recent years. While the United States dominates the rankings for the most top-rated universities in the world (with 157 institutions in the top 1,000), the United Kingdom, Canada, Australia, Germany, and China have all made targeted efforts to compete for more international students.

International students make valuable contributions, particularly with regard to economic growth and tuition revenues. The combination of new foreign visa policies, divisive immigration rhetoric, and changes in the international education landscape has likely resulted in a decline in enrollment. Continued declines could jeopardize the annual $37 billion of economic contributions from international students, and strain institutional budgets, potentially placing upward pressure on tuition prices for domestic students. The potential solutions to this challenge lie across a variety of jurisdictions, ranging from the pricing and recruitment policies of individual institutions to the machinations of federal immigration policy. Given the importance of international students for both local economies and the institutions themselves, policy makers should be keenly aware of these developing trends as well as their effects on education and the economy.

The Hidden Impact of International Students