Recently, the Center on Budget and Policy Priorities (CBPP) posted a blog that criticized the analysis of the sequester contained in the BPC Task Force on Defense Budget and Strategy’s recent report, Indefensible. CBPP generally does quality and important work, including a very good, substantively correct technical analysis of the sequester, but this recent criticism of BPC’s report is unfounded and overstated.

The CBPP post does not actually take issue with any of the Task Force’s findings or conclusions. Instead, it emphasizes what CBPP believes to be “very questionable assumptions” underlying the Task Force’s analysis, and concludes by levying the charge that “we should take a realistic look at what [the sequester] means, not one based on worst-case scenarios that won’t likely come to pass.”

By all means, we should take a realistic look at what the sequester means. But, that is exactly where CBPP’s analysis falls short.

First, it’s important to note that the Task Force’s assumptions are clearly spelled out in its report, and they are just that ? assumptions. The Task Force is not by any means positive that this precise scenario will transpire, but based on current circumstances and reasonable projections, the assumptions approximate what we believe to be the most likely sequence of events. Moreover, we consider this set of assumptions to be significantly more realistic than those presented in CBPP’s analysis. 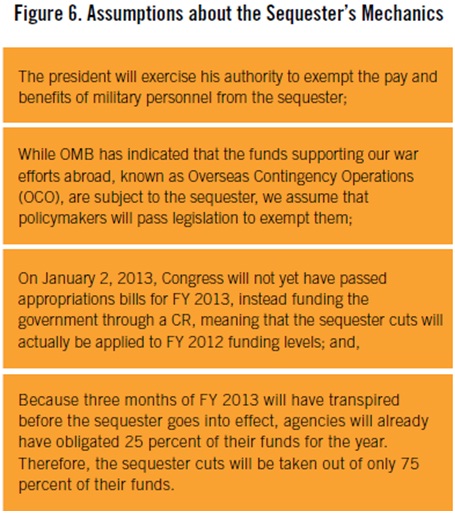 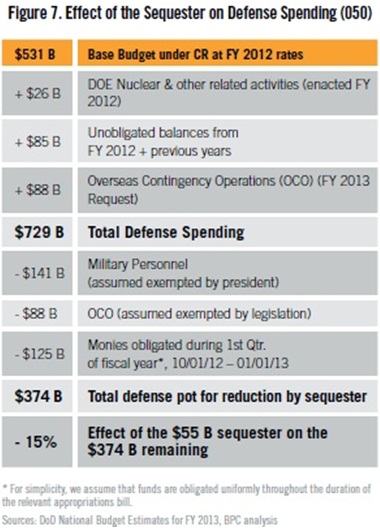 BPC essentially assumes that, even with sequestration looming in January, the Defense Department and other federal agencies will proceed full-speed-ahead in the first quarter by committing one-quarter of their total annual funding in those months ? We think that’s quite unlikely. Agencies know sequestration is scheduled, and they know it would be much more prudent for them to obligate funds at a slower rate during October-December in order to spread the cuts over the entire fiscal year.

As stated in the Task Force report, the projection that ¼ of Department of Defense’s (DoD) funding would be obligated in the first quarter of the fiscal year is a simplifying assumption. It was made in order to avoid having to guesstimate the exact amount of money that will be committed between October and the end of December 2012 ? a figure that no one currently knows.

Yes, it is probable that agencies would obligate funds at a slightly slower rate in the first three months of Fiscal Year (FY) 2013. The Impoundment Control Act of 1974 (as amended), however, constrains the ability of agencies to withhold the obligation of monies from programs that Congress has instructed them to fund. Of course, agencies can find some leeway for slowing their operations without violating the law, but not without limit.

Moreover, there is the simple fact that the DoD still needs to fund its operations for the first quarter of the year. Perhaps this can be done in a bare-bones manner by only obligating, say, 22 percent of its budget in the first quarter, but does CBPP really think it more likely that DoD would obligate zero dollars, as is implied by the analysis that leads them to their 9.5-percent cut estimate?

Even more questionable, BPC assumes that Congress will enact legislation to alter the Budget Control Act (BCA) by protecting war funding in a way that forces even bigger cuts in the rest of the defense budget ? namely, by exempting war funding from sequestration ? But for that to occur, Congress would have to change the sequestration rules in the BCA. And if gridlock leads to sequestration actually taking effect, then it’s quite unlikely that Congress would have succeeded in passing legislation to do that.

Actually, there are pieces of “must-pass” legislation before the end of this year ? such as the continuing resolution to fund the government for FY 2013, which is needed by September 30th. That legislation could easily be used as a vehicle for purposes of exempting war funding. Given that some members of Congress have already indicated that they will propose such an amendment, we believe that this language has a good chance of being enacted into law. Can you really see many members of Congress voting against an amendment to protect funding for our troops in harm’s way? We can’t.

More importantly, even though the cut to each defense program, project, and activity would be “only” 13 percent if war funding remains subject to the sequester, that would be the “worst-case scenario” ? slashing funds for our combat troops overseas.

But most importantly, we agree that the sequester is an awful policy. Regardless of the exact percentages of funds that the sequester cuts, the damage to domestic and defense programs, along with the economy as a whole, will be severe. And as we explain in the report, the negative ramifications have already begun. Thus, action should be taken as quickly as possible to address the sequester and the rest of the “fiscal cliff.”