For over two decades, Kurdish groups in Iraq have played a key role in shaping the country and served as an important American ally after U.S. military operations began in 1991. Iraqi Kurds were instrumental in helping a U.S.-led coalition oust Saddam Hussein from power in 2003 and are often considered the “glue” that holds the country together amid escalating Sunni and Shia tensions. Kurds in Iraq now have de facto self-governance and have gained international standing due to the Peshmerga’s?the Iraqi Kurdish fighting force?success in pushing back ISIS militants in Iraq.

The Bipartisan Policy Center previously analyzed the nexus between Kurdish groups in Syria and Turkey, as well as the complicated Turkish-American-Kurdish triangle. But, given their intersection with key Kurdish groups in Iraq, and the Iraqi Kurds’ tandem fight against ISIS, it is crucial for an understanding of regional dynamics to examine Iraqi Kurdish groups.

While Turkey is hostile toward Syrian and Turkish Kurdish groups due to their speculative links to the designated terrorist Kurdistan Workers’ Party (PKK), the Turkish government and the Kurdish Regional Government (KRG) enjoy mutually-beneficial economic ties and cooperate extensively on a booming oil trade. This conflicting Kurdish strategy puts Turkey in an awkward spot, especially after President Recep Tayyip Erdo?an recently ramped up military efforts against the PKK and launched a smear campaign against Turkey’s pro-Kurdish political party, the Peoples’ Democratic Party (HDP). While transnational Kurdish groups don’t always see eye-to-eye, as the Kurdish cause becomes increasingly resolute, Erdo?an’s dualism could serve to undermine him in the long run.

This analysis aims to highlight the organizational, ideological and operational linkages between key Iraqi Kurdish organizations, their ties to transnational Kurdish organizations in Syria and Turkey, and their relationship with Turkey and the United States. While many other offshoots, splinter groups and advocates also exist to promote Kurdish interests, we focus on key groups operating in Iraq and their intersection with regional counterparts.

Unlike in Turkey and Syria, there is a much greater diversity of Kurdish groups in Iraq. However, much like those in other countries, many Kurdish organizations in Iraq are also driven by a Kurdish nationalist agenda and some are influenced by Marxist-Leninist ideology. The primary Kurdish actors in Iraq are the KRG, Kurdish Democratic Party (KDP), Patriotic Union of Kurdistan (PUK) and the Peshmerga Armed Forces.

The KRG serves as the overarching ruling body of the semi-autonomous region in northern Iraq, under which the three key Iraqi Kurdish organizations fall: The KDP, PUK and Peshmerga. The KDP and PUK are competing political parties, which make up the coalition government of the KRG, while the Peshmerga serves officially as the KRG’s armed forces. 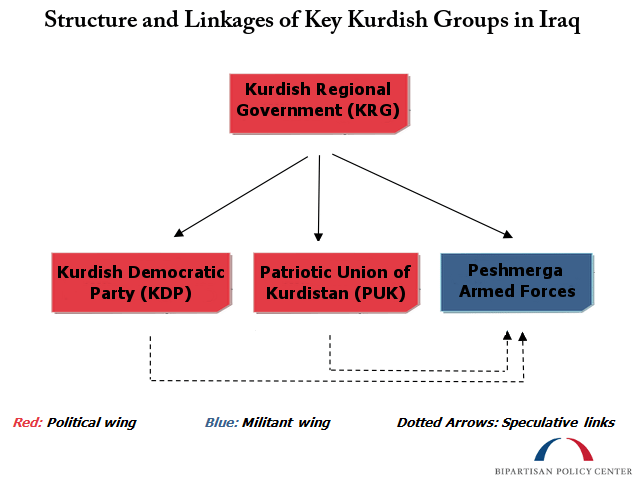 The KRG: The Kurdish Regional Government was founded in 1992 after the first Gulf War in Iraq. Following the fall of Saddam Hussein in 2003, Kurds in Iraq successfully won regional autonomy and self-governance in the northernmost part of the country. The KRG operates as an autonomous state in Iraq and presents itself as more democratic, economically viable and stable than the rest of the country. However, power-sharing between the KRG and the Iraqi government has led to frequent tensions over disputed territory, allocation of resources from the Iraqi government, and control over oil exports.

The KDP and the PUK: The KDP was originally founded in 1946 by the Barzani clan as a national freedom movement to fight against Iraqi dictatorship. The PUK began as a KDP splinter group, officially splitting from the KDP in the 1970s due to disaffection with the KDP’s tribalism and nepotism. The two parties have very different priorities and are strong rivals. The PUK is a more liberal, social-democratic party focused on creating a multiethnic Iraqi state. The KDP is more conservative, nationalist and favorable toward an independent Kurdish state. Generally considered more dominant and effective, the KDP controls the capital of Iraqi Kurdistan, Erbil, while the PUK controls Sulaymaniyah, the third largest city in Iraqi Kurdistan. Differences between the two parties erupted into a civil war in the 1990s, killing thousands of Kurds. After a U.S.-brokered ceasefire in 1997, the two agreed to a power-sharing agreement and united as a tenuous but functional coalition government.

The Peshmerga: Officially designated as the armed forces of the KRG?though frequently divided and controlled separately by the KDP and PUK?the Peshmerga are responsible for protecting the territorial integrity of Iraqi Kurdistan. Peshmerga units often act independently and according to party cliques. Modern-day Peshmerga fighters are mostly made up of veterans who fought Iraqi government forces during the first Gulf War and Operation Desert Storm in the 1990s, and during the Kurdish civil war between the KDP and PUK. With an estimated 190,000 troops, the Peshmerga have acquired weapons and training from a number of world powers including the United States, Germany and Russia. Peshmerga fighters have been on the front lines in the fight against ISIS and cooperate closely with the United States and Turkey.

Operational Linkages among Kurdish Groups in Syria and Turkey

PUK and PKK/PYD: In general, relations between the PUK and PKK?and its Syrian affiliate, the PYD?have been cooperative and amiable. This is largely because the PUK served as a mediator between the Turkish government and the PKK, and they see eye-to-eye on the Syrian crisis as both oppose Western or Turkish intervention, which is in stark contrast to the policies of the KDP. The PUK has recently cozied up to the PYD, allowing it to operate freely and organize meetings and demonstrations in PUK-controlled Sulaymaniyah. Analysts view this close relationship as a way for the PUK to counterbalance Barzani and the KDP’s Syrian and Turkish policy, and thereby weaken the party’s influence.

KRG and PKK: While neither have express ties to one another, and have long disagreed on tactics, over the past decade, the KRG and the PKK have had a tacit understanding: PKK fighters would retain a presence in Iraq’s Qandil Mountains which extend into Turkey, and, as long as the PKK kept the conflict contained, the KRG would do little to remove them. This agreement likely stems from PUK-PKK ties.

Wanting also to maintain a delicate balance with long-time economic partner Turkey, however, the KRG has been an ardent supporter of the PKK reconciliation process and urged the PKK to abide by the peace process and vacate the Qandil Mountains. In response to tenuous negotiations, KRG President Masoud Barzani claimed, “The Turkish government has taken positive steps, and has adopted a positive attitude for a peaceful resolution, however, we have seen that some sides (the PKK) has taken it as a matter of pride and did not utilize these opportunities.”

The Kurdish bond, however, has been known to trump foreign alliances, as the KRG recently condemned Turkish government attacks on the PKK, which intensified over the summer. Barzani denounced Turkish belligerence, saying, “We demand an immediate end to it. This kind of development creates anger among Kurdistan’s people.” The KRG and PKK have also joined forces in the fight against ISIS, which threatens the sovereignty of Iraqi Kurdistan. The KRG has allowed the PKK to move fighters and weapons out of its secluded bases in order to aid in its defense. The PKK and its Syrian affiliate, the YPG, were instrumental in helping to protect Iraq’s Mount Sinjar on the Syrian border.

With separate and official representation in Washington, the KRG describes itself as a pro-Western entity with needs and goals that are distinct from the Iraqi state. Since supporting American forces in the overthrow of the Saddam regime in 2003, Iraq’s Kurds have benefitted from a partnership with the United States, which led to autonomous governance and relatively stronger economic and security conditions. Until recently, however, the U.S.-KRG relationship had been strained by the U.S. designation of both the KDP and PUK as Tier III or undesignated terrorist organizations in 2001. The organizations were included due to “catch-all” provisions under the Patriot Act. As a result of the designation, in 2014, KRG President Barzani reportedly refused to meet with President Barack Obama and wrote in a letter that he did “not care if [he] became embarrassed in front of [Obama], it is important not [to be] ashamed and embarrassed in front of [his] people.” Both groups remained on the list until December 14, likely as part of an effort to bring the KRG on board with U.S. anti-ISIS efforts in the region. A U.S. official said that the Iraqi Kurds were “a stabilizing force in the region and consistently loyal to the United States for decades.” The KRG cooperates heavily with the United States on combatting ISIS on the ground, receiving direct military and political support, and is therefore a strategic ally in the region.

While the KRG remains overall friendly toward the United States and cooperates on fighting ISIS, the KDP and PUK are often polarized on foreign alliances. Historically, the KDP has been more aligned with Western interests and cultivated a strong economic relationship with Turkey. Conversely, the PUK has postured squarely away from Turkey and the West, and maintains alliances with the PKK and Iran, which supported the PUK during the Kurdish Civil War as a way of limiting U.S. and Western influence. Such divisive foreign policy positions, which are poised to become more resolute due to Erdo?an’s hardline approach to the PKK and the main Kurdish political party in Turkey, could lend itself to heightened tensions and a strained coalition government. Given shifting dynamics in the region, the PUK may attempt to push back on Barzani’s policies, which could complicate Iraqi Kurdistan’s relationship with Turkey and the United States.

Aside from public statements condemning Turkey’s actions, the KRG’s relations with Turkey have largely remained the same following Turkey’s bombings of PKK fighters and plans to create a buffer zone along the northern Syrian border. This is likely due to the extremely lucrative nature of trade between the two and the KRG’s ambivalence toward the radical methods of the PKK. Continued escalation of the conflict between Turkey and the PKK, however, could draw the KRG into the fray, especially given the PUK’s close relationship with the PKK and the band of Turkish, Syrian, and Iraqi Kurdish fighters battling ISIS. A looming ISIS threat coupled with Turkey’s renewed military offensive against PKK fighters, who underpin the anti-ISIS Kurdish coalition, could bolster the Iraqi Kurdish resolve and cause them to shift away from Turkey amid these changing and dangerous regional dynamics. A bolstered transnational Kurdish movement would spell trouble for Turkey, weakening the security and stability of the region.

An emboldened Kurdish nationalist movement could also complicate the U.S.-led anti-ISIS coalition. The United States’ continued support of its NATO ally Turkey has drawn fire from some Kurdish groups and the United States may have inadvertently begun to lose the support of PKK and its ally, the People’s Protection Units (YPG), an armed Kurdish militia in Syria. While the United States and the KRG have historically enjoyed good relations, an escalated Kurdish-Turkish rivalry could undermine U.S. interests and put the United States in a difficult spot between Turkey and the Kurds. Given the importance of the Peshmerga in combatting the growing threat of ISIS, however, the United States can hardly afford to lose favor with such an effective ally.