Although the U.S. Department of Transportation’s Smart City Challenge ended over two years ago, cities across the country remain enthusiastic about using smart technology to improve numerous facets of urban life. The Smart City Challenge?which invited cities to develop innovative solutions to solve urban transportation issues using data and technology?encouraged municipalities to envision themselves as smart cities of the 21st century. 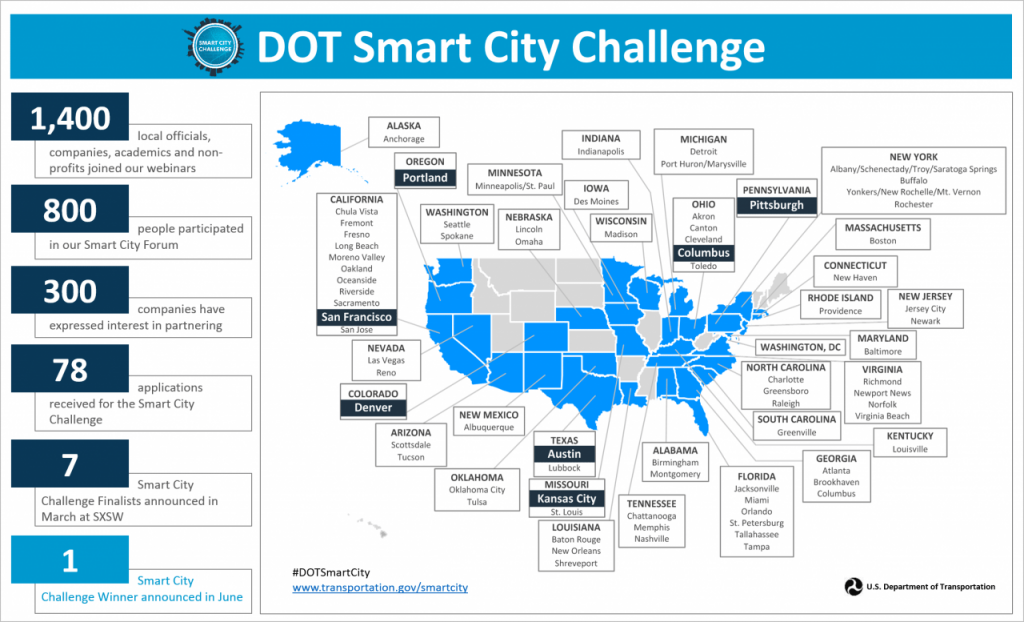 Although Columbus won the $50 million grand prize?$40 million from DOT and $10 million from Vulcan Inc.?it wasn’t the only winner. In October 2016, DOT announced $65 million in additional grants to fund smart transportation projects across the country, including competition finalists Pittsburgh, San Francisco, Denver, and Portland.

The Smart City Challenge encouraged cities to think creatively about the potential of smart technologies since even those who didn’t win are pressing forward with some of their ideas. In that respect, the Smart City Challenge was more than just a one-time competition. It was a call to action that inspired cities, innovators, and entrepreneurs to find new ways to efficiently use data, applications, and technology to solve issues impacting large segments of the country.

Where sewers, electrification, and automobiles once revolutionized cities, today a wave of “smart” technologies like drones, artificial intelligence, autonomous cars, and ubiquitous high speed internet are causing another reimagining.

According to the National League of Cities, smart cities have:

At its core, a smart city is a community that uses technologies?such as online data, drones, monitoring, blockchain, or connected infrastructure?to collect, aggregate, and analyze data in real time to boost the quality of government services and improve the lives of its residents.

Following in the footsteps of the Smart City Challenge, in 2016, the nonprofit organization Transportation for America (T4A) announced a new partnership with the Alphabet-affiliate Sidewalk Labs to bring cities together to develop “efficient and affordable transportation options for all.” The resulting Smart Cities Collaborative received almost 60 applications from communities in 31 states, many of which had previously applied to the DOT competition. In the end, 16 cities were invited to the collaborative’s first meeting, at which their representatives formed working groups around three key topics: automated vehicles, shared mobility, and performance measures and data analytics. By July 2018, the second cohort of the Smart Cities Collaborative grew to 22 cities, including twelve returning and ten new cities. 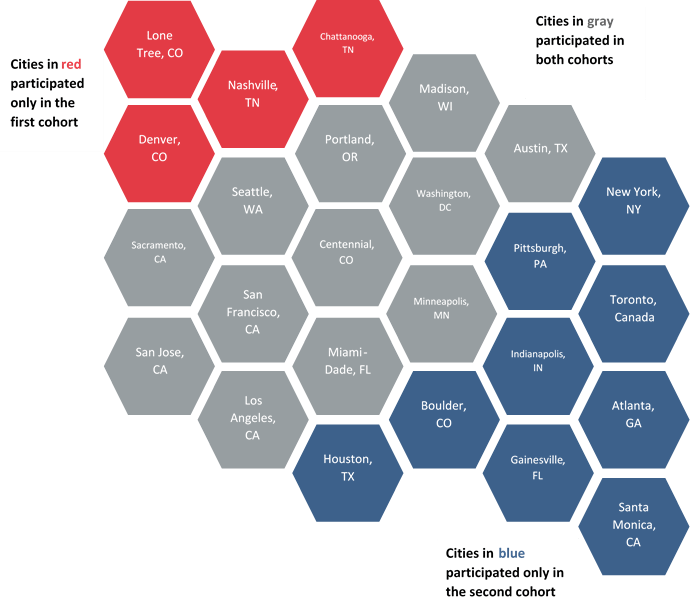 Notably, cities were selected to participate based on the type of projects they are developing, their availability of funds, and their willingness to collaborate with other cities.

As demonstrated by this collaborative, the first wave of smart city initiatives focused primarily on improving traffic flow, increasing transportation equity, reducing carbon emissions, and creating efficient data management systems. As smart city concepts have evolved, these cities are now also trying to address first-and-last-mile mobility, the best use of curb space and rights-of way, and the unprecedented and growing role of dockless bikeshare systems and electric scooters.

While smart cities will inherently be driven by advancements in technology, it will be equally important to create and maintain networks, like this collaborative, for cities to learn from one another on how to best introduce and leverage these technologies, while effectively managing their impact on residents and existing urban systems.

The Smart City Challenge?which was a relatively modest financial investment for the federal government at 0.07 percent of DOT’s budget in 2015?demonstrates how public policy can play a valuable role in promoting technological innovation in cities across the country. Although Columbus was the sole winner of the 2016 competition, numerous other cities?regardless of whether they applied to DOT’s challenge or not?are beginning to incorporate smart technologies into their communities to solve pressing urban issues. Beyond the direct award, the competition propelled a wave of nonprofit and private entities to work alongside local governments in developing innovative solutions and creating forward-looking policies on managing smart technology. From a federal policy perspective, issuing another challenge or competition could be a worthwhile endeavor to both accelerate existing projects, and inspire innovation in cities across the country.

In the second part of this series, we’ll look at how five cities are pioneering innovative uses for smart technology.

Dockless Bikes and Scooters: The Rise of Micro-Mobility

"3I" Series on Infrastructure Ideas and Innovation: The Industrial Internet of Things