But the Pentagon now has only six months to spend $80 billion, and it’s fair to ask how exactly the Department of Defense can efficiently spend such a large sum in such a short period.

This question arises in the context of the recently-passed Bipartisan Budget Act of 2018, an agreement that authorizes discretionary spending levels well above the Budget Control Act’s (BCA) original spending caps. Indeed, the new law allows more than $300 billion in new appropriations over the next two fiscal years, effectively ending the reign of the Budget Control Act.

For DoD this is welcome news; the department has long awaited substantial relief from the BCA’s rigid caps. The newly authorized topline figures provide for that relief, at least for the moment (fiscal years after 2019 could still be in jeopardy, but that possibility seems exceedingly unlikely). From the perspective of DoD then, the death of this most unholy beast is, and should be, a cause for celebration.

But the budget deal is not yet final. Line-by-line appropriations have not yet been completed, and likely won’t be until late March. The topline numbers are set in law, but the rest of the details must be filled in by appropriators. As a result, by the time the deal is final, DoD will only have six months to spend $80 billion in additional appropriations slated for fiscal year (FY) 2018 on top of previous continuing resolution spending levels.

So, how can DoD efficiently spend such a large sum in such a short period?

At a recent Senate Armed Services subcommittee hearing, the Navy’s vice chief of naval operations, Adm. Bill Moran, put it bluntly. “I think we’re going to need some help with the appropriators on how we spend that money,” Moran said. “The add is so significant that we’re going to have to look at having the ability to transfer some of that money from account to account.”

To solve this problem for the short term, Congress could authorize DoD to transfer funds from account to account and also across time from FY2018 to FY2019, as Gen. Glenn Walters, assistant Marine Corps commandant, suggests. This option would allow DoD the flexibility needed to effectively make use of this large funding increase.

However, in the long run this problem of delayed Congressional appropriations will likely crop up again. Indeed, Congress hasn’t passed a regular appropriations bill on time since 2009 and FY2018 is no exception. At the time of publication, the government is still operating on a continuing resolution, on the 143rd calendar day of the fiscal year. This should not be a surprise. In the last few years (from FY2010-2017) DoD has spent about 125 days per fiscal year operating under a continuing resolution. Operating DoD?and the government in general? in this manner incurs significant costs and increases inefficiency, according to the Government Accounting Office and the Congressional Research Service. 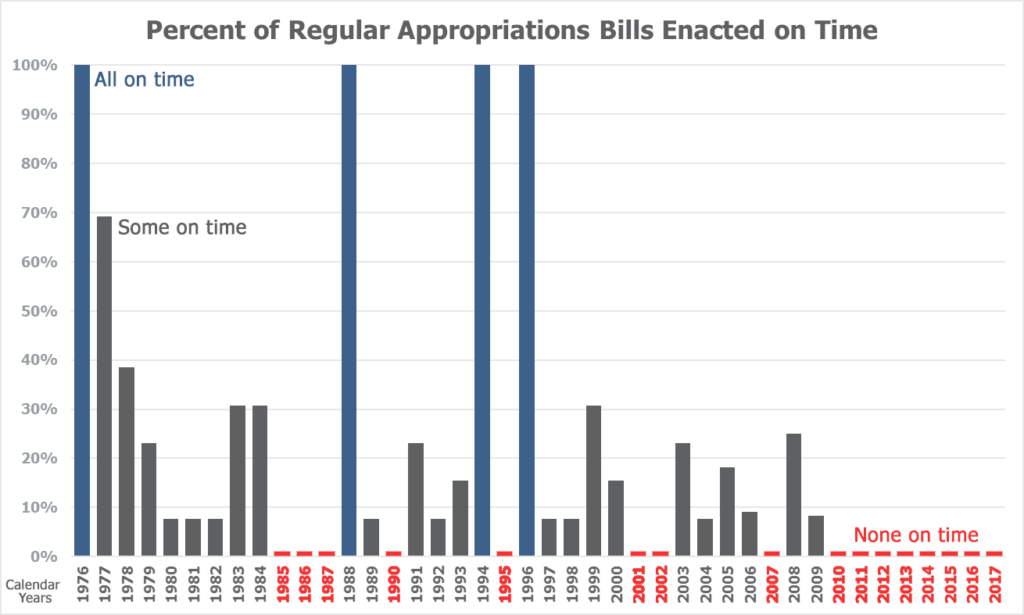 Congress appears to be taking some steps to address this issue. The Bipartisan Budget Act of 2018 authorizes the creation of a group (the so-called Joint Select Committee on Budget and Appropriations Process Reform) meant to analyze problems and potential solutions for budget process issues. But for defense in particular, Congress could take additional steps to ensure that the budget process operates efficiently and on time. BPC’s Task Force on Defense Personnel recommended replacing the BCA with a strategy-based budget that is regularly reviewed and updated. While the BCA is dead for the time being, Congress has yet to adopt a strategy-based budget for DoD, as our task force recommends.

What this means, ultimately, is that DoD is trapped in a vicious cycle with regard to budgeting. Policymakers often opine about waste at the Pentagon, and rightly so; there certainly is waste. But how can DoD rectify such waste when given so little time to plan and execute vast increases in spending? It seems as though defense leaders and policymakers have a common enemy in an inefficient and disorderly budget process that contributes to both diminished military capacity and the ongoing misuse of taxpayer money. To address this common enemy, the newly minted committee for budget process reform, cited earlier, could include defense-specific reforms in their recommendations, such as those proposed by our task force.

Budget woes aside, leaders at the Pentagon face another significant challenge: the mismatch between the military’s personnel and its equipment. While the new topline figures will help to ease the current readiness crisis on the equipment side, hopefully stopping the cannibalization of future investments to pay for today’s equipment, additional money does little to address structural issues in the Pentagon’s personnel system.

What structural personnel issues? Here are the broad issue categories (to learn more, click the hyperlinked text or read the full report of BPC’s Task Force on Defense Personnel here):

Taken together, these personnel issues could threaten the prospect of a healthy all-volunteer force going forward, and an increased defense topline does little to address them. Regarding the civilian-military divide in particular, Deputy Assistant to the Secretary of Defense Amber Smith summarized the issue plainly, saying, “From our internal data, we have seen that the civilian-military divide is expanding.” She went on to say, “That ultimately is a threat to the viability and sustainability of the all-volunteer force.”

The death?whether permanent or temporary?of the Budget Control Act was long awaited, and will no doubt have some positive affects for the readiness of the U.S. military. However, a restored defense topline should not distract from the issues that the Pentagon continues to face, which in the absence of reform, could pose a serious threat to the future of the all-volunteer force as we know it.