On November 24, 2015, Turkey shot down a Russian jet that entered its airspace. Many observers in the United States question whether this was a wise decision, but they did not doubt that Turkey was correct about the plane’s location. Russia continued to insist the plane had remained in Syrian airspace, but despite Putin’s protestations, U.S. officials expressed faith in the credibility of Turkey’s claims.

Compare this to the aftermath of the February 17, 2016, car bombing in Turkey’s capital. The Turkish government quickly blamed the PYD a Syrian Kurdish group that along with its armed wing, the YPG, has become America’s partner in the fight against ISIS. Then, two days later, a splinter faction of the Kurdistan Workers Party (PKK) took credit for the attack, leaving the government scrambling to justify its earlier claim.

The growing credibility gap between Washington and Ankara also reflects the fact that U.S. policy depends on maintaining a dubious distinction between the PKK and the YPG. Since 1997, the United States has, at Turkey’s insistence, recognized the PKK as a terrorist organization. Among other things, this means that if the United States acknowledged the YPG as simply the PKK’s Syrian wing, it could not legally provide aid to the group. Rather than angering Turkey by delisting the PKK, U.S. policymakers sought to have their cake and eat it too by claiming the YPG is, despite sharing an ideology, leadership structure and history with the PKK, a different organization. 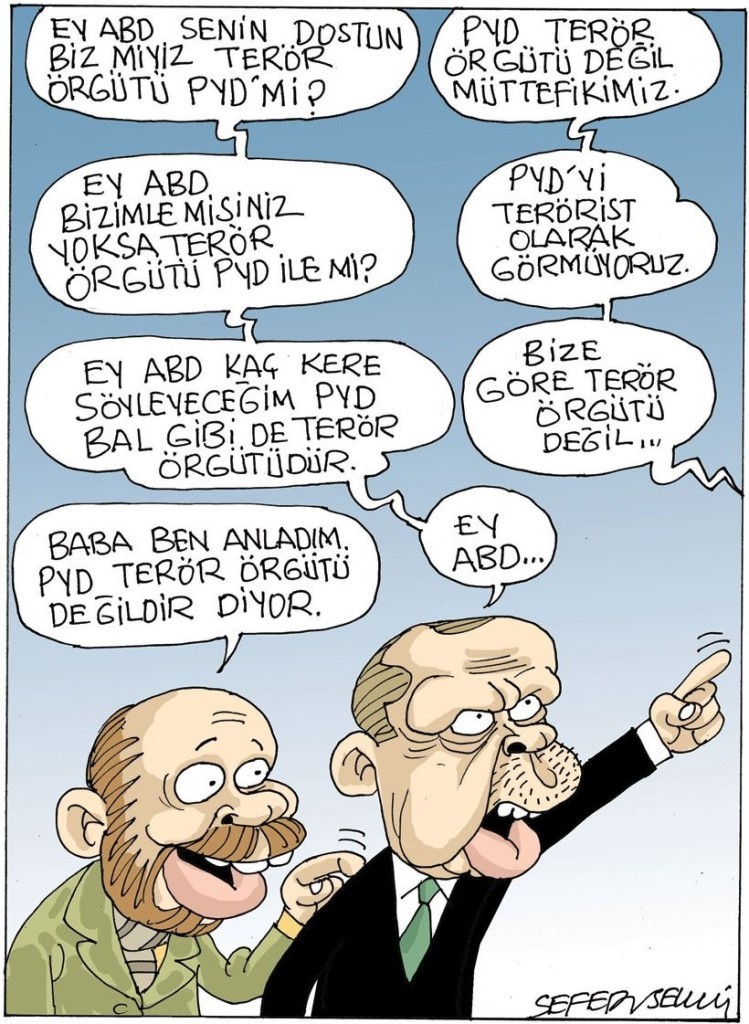 Related to this fundamental disagreement, a series of subsequent spats erupted. Washington denies Ankara’s claim, for example, that weapons given to the YPG have ended up in the hands of PKK fighters. More recently, Turkey’s Foreign Minister quoted Secretary John Kerry as calling the Syrian Kurds “untrustworthy” and saying he was “glad to hear from John Kerry yesterday that his views on the YPG have partly changed.” The next day, a State Department spokesman declared “Our assessment, our policy towards [the YPG] has not changed,” adding, of their role in the fight against ISIS, “I trust them in this regard.” And to make matters more interesting, as this public dispute continued a Turkish columnist reported sources from the Turkish security establishment saying “in confidential meetings U.S. officials have told them that they actually see no difference between the PKK and the PYD?from the joint use of militants to weapons?but they cannot say so in public because of the Obama administration’s policy.”

Essentially, Turkey and the United States have both turned to their own preferred fictions because they have not found a more effective means to reconcile their conflicting interests in Syria. The United States is fixated on ISIS and Turkey is fixated on the Kurds. To defeat ISIS, the United States has doubled down on its support of the YPG while largely ignoring Turkey’s objections. Turkey, for its part, lacking more effective means of leverage, has had to resort to angry statements and exaggerated claims to try to pressure the United States into accommodating Turkish interest. Having Russia once again at its doorstep has certainly helped Turkey appreciate the benefit of its NATO allies, leaving Ankara in the position of criticizing but passively accepting U.S. support for the YPG. In short, if Washington is happy for the United States and Turkey to go on agreeing to disagree, Ankara has accepted this arrangement at best disagreeably.

If anything, given the magnitude of this disagreement, touching on crucial issues of national security for both sides, it is actually remarkable that U.S.-Turkish relations remain as functional as they do right now. But for both countries to maintain their alliance and their credibility, a more lasting solution is needed to replace this tenuous modus vivendi. Realistically, this would require Turkey to reach a ceasefire with the PKK that, in a best-case scenario, could even lay the groundwork for the two sides to return to the negotiating table. Turkey, of course, would be well served to return to negotiations for its own benefit. Barring a Turkish change of heart, the United States would ideally use its influence over both sides to push them toward a ceasefire. But U.S. influence is limited, and what leverage Washington has is currently devoted to ensuring both Turkish and Kurdish cooperation in the ongoing fight against ISIS. U.S. policymakers can hardly be faulted for giving such clear priority to defeating ISIS?it’s ISIS after all. As long as this emphasis remains though, U.S. relations with Turkey will continue to be strained.

The Kurds, Sykes-Picot and Quest for Redrawing Borders