This month, the CDC released its Breastfeeding Report Card for 2014, coinciding with National Breastfeeding Month in the United States. The results of the report show that 79 percent of mothers initiate breastfeeding, up from 75 percent a year ago. However, this number drops off sharply during the first six months of life: at three months of age, only 40 percent of infants are exclusively breast fed, and by six months this number drops further to less than 20 percent.1 Although not all mothers can or choose to breastfeed, numerous national and international public health organizations, including the American Academy of Pediatrics and the World Health Organization, recommend exclusive breastfeeding for the first six months of life. And there are many good reasons why.

It is well established and widely recognized that breastfeeding provides numerous health benefits for both mothers and infants. In our 2012 report, Lots to Lose: How America’s Health and Obesity Crisis Threatens Our Economic Future, we highlighted supporting breastfeeding mothers and babies as a key piece in the fight against obesity by giving everyone a healthy start to life. Breast milk provides infants with essential nutrients for early development, and research has shown that breastfeeding is associated with a child having a lower risk of certain conditions later in life, including obesity and chronic disease. In addition, breastfeeding mothers experience decreased risk of certain cancers.2

Beyond health benefits, breastfeeding can also save money for both individuals and the health care system. Families can save $1,200-$1,500 in the first year of their child’s life by choosing breastfeeding over infant formula.3 A 2010 study by the American Academy of Pediatrics found that if 90 percent of new mothers in the United States breastfed exclusively for six months, this change could deliver health care cost savings of $13 billion annually on reduced morbidity and mortality.4 Although the CDC 2014 Report Card shows improved breastfeeding rates over the 2013 Report Card, more needs to be done to ensure that mothers who wish to breastfeed find the support they need to continue once they leave the hospital.

That support can and should come from multiple sources.  In fact, the theme for this year’s World Breastfeeding Week (August 1-7), “Breastfeeding: A Winning Goal for Life,” emphasizes the need to engage as many people as possible in the mission to protect, promote, and support breastfeeding. World Breastfeeding Week 2014 highlights the connection between the goal to increase breastfeeding rates and the Millennium Development Goals (MDGs). These eight goals were set by the United Nations at the Millennium Summit in 2000 to address a range of global issues, including poverty, hunger, gender equality, maternal health, and child mortality. As the U.N. Standing Committee on Nutrition (SCN) recognized in 2005, improved breastfeeding rates were important to achieving all eight of the MDGs. The specific connections between increased breastfeeding and the success of each MDG are illustrated in the graphic below. As of August 18, 2014, the world is officially 500 days away from the expiration of the deadline for the MDGs, which were originally meant to be achieved by 2015. This year’s World Breastfeeding Week responds to that countdown by calling for support of breastfeeding mothers and babies to be a priority in the next year, as well as beyond. 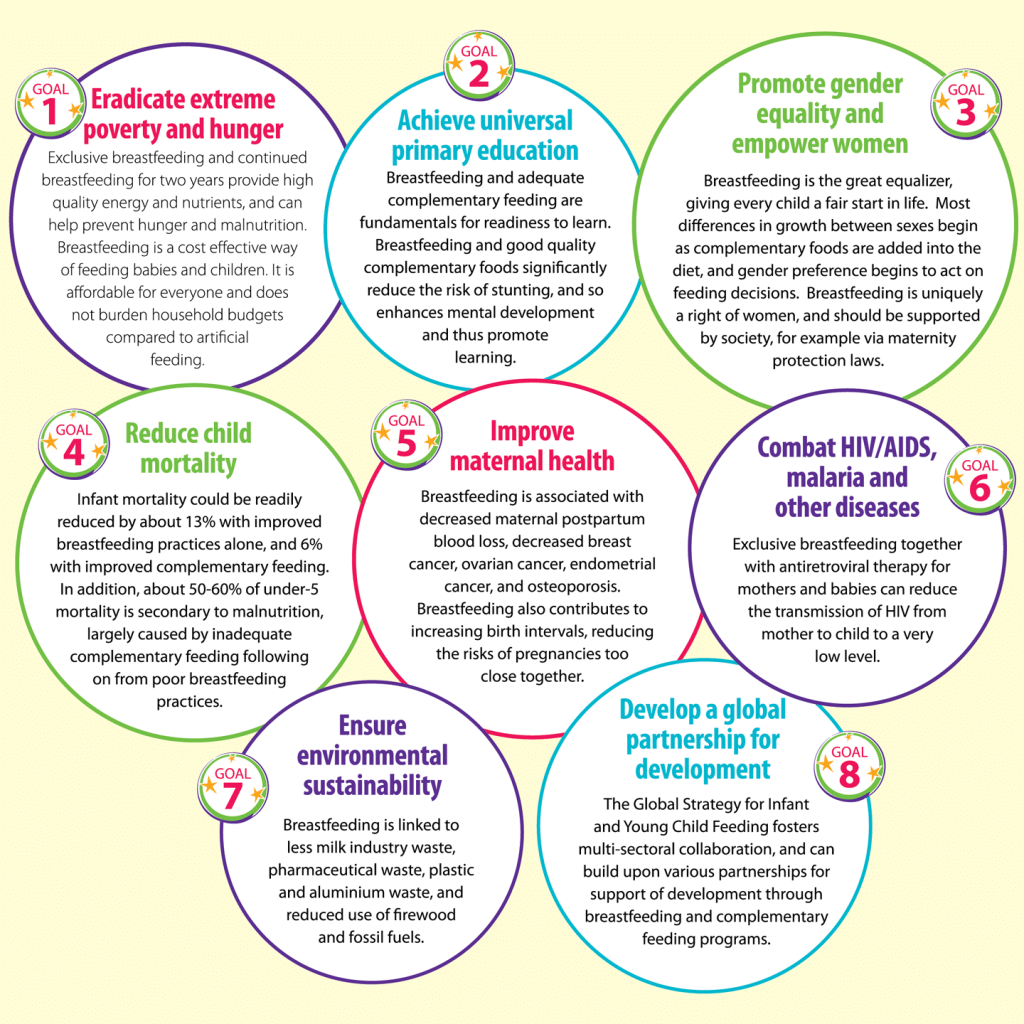 One area  of focus regarding breastfeeding in our report Lots to Lose: How America’s Health and Obesity Crisis Threatens Our Economic Future, was the importance of workplace support for nursing mothers as a key component in reducing the barriers to breastfeeding throughout the first six months of a child’s life. We were pleased to see the recent release by the U.S. Department of Health and Human Services, Office on Women’s Health, of a new resource for employers to help them accommodate employees who are breastfeeding. The online resource, Supporting Nursing Moms at Work: Employer Solutions, offers employers in all industry sectors solutions for providing the time and space requirements that allow nursing mothers to express milk at work. Developed through extensive stakeholder outreach with businesses across the country, the website highlights success stories from businesses in all sectors that support nursing moms in continuing breastfeeding once they have returned to work.

We recognize that the workplace is only one environment in which breastfeeding support needs to be made a priority. Hospitals and health care providers also have key roles to play in giving nursing mothers the necessary tools to breastfeed. Two health care leaders include providers Kaiser Permanente and the Indian Health Service (IHS), the agency within HHS responsible for providing federal services to American Indians and Alaska Natives. Both have committed to meet Baby Friendly standards in all of their hospitals. Baby-Friendly Hospitals are recognized as having successfully implemented the Ten Steps to Successful Breastfeeding, evidence-based practices shown to increase breastfeeding initiation and duration. These examples are encouraging, but more positive changes are needed to ensure that every mother who wishes to breastfeed has the ability to do so exclusively for the first six months of her child’s life. Educational events, like World Breastfeeding Week and National Breastfeeding Month, and resources like Supporting Nursing Moms at Work: Employer Solutions, help to bring attention to this important issue and move the needle in a positive direction. Change needs to happen across all key institutions ? including government and the wider community ? to meet the winning goal of providing all mothers and babies the opportunity to breastfeed.

2 Centers for Disease Control and Prevention. Strategies to Prevent Obesity and Other Chronic Diseases: The CDC Guide to Strategies to Support Breastfeeding Mothers and Babies. Atlanta: U.S. Department of Health and Human Services; 2013.

4 Bartick, Melissa, and Arnold Reinhold. “The Burden of Suboptimal Breastfeeding in the United States: A Pediatric Cost Analysis.” Pediatrics vol. 125 No. 5. 2010. P 1048.