In April, Congress narrowly avoided a government shutdown by agreeing to $122 billion in deficit reduction over the course of ten years. Less than four months later, they narrowly averted a debt ceiling crisis by passing the Budget Control Act (BCA) and agreeing to another $900 billion.

Included in that deal was the formation of a Joint Select Committee (JSC) tasked with finding additional savings, and a trigger mechanism that would provide an additional $1.2 trillion in deficit reduction if the committee failed.  The common thread linking each of these three savings figures is that they are all almost entirely composed of discretionary spending cuts.

This comes as no surprise to many seasoned fiscal watchdogs.  Domestic and defense discretionary cuts are demonstrably relatively easy to pass through Congress compared to the legislative and political challenges involved with reforming the tax code or major entitlement programs.  As a result, politicians have been quick to grab this low-hanging budgetary fruit, making discretionary programs the first to bear the burden of deficit reduction.

As the president’s Fiscal Commission, the BPC’s Debt Reduction Task Force and the Senate’s Gang of Six demonstrated, there are three central components to any successful package: discretionary spending restraint, comprehensive tax reform that raises revenue, and curbing the growth of our entitlement programs.  The first of these has now been addressed strongly with more than $1 trillion in cuts between the April agreement and the upfront reductions in the BCA.  This was a solid step towards the goal of fiscal sustainability, and should encourage members of the JSC to tackle the other two pieces: revenues and entitlements.

If the members of the JSC are not motivated already, the looming sequester should help. Some hope that the JSC simply will allow the trigger to be pulled and have it produce our deficit reduction for us. Do not be deceived; taking this path would be a huge missed opportunity and a grave mistake.

Here are two reasons why:

1. The cuts to the discretionary part of the budget would be severe

Both domestic and defense discretionary spending have been relatively elevated for the past few years. These inflated levels are due to legislation enacted to combat the recent recession and our escalating overseas engagements, respectively. Over the coming decade ? even before passage of the BCA ? you can see that each category was projected to decline significantly as a percentage of GDP, roughly meeting the lowest level experienced in the modern era (since before 1970). 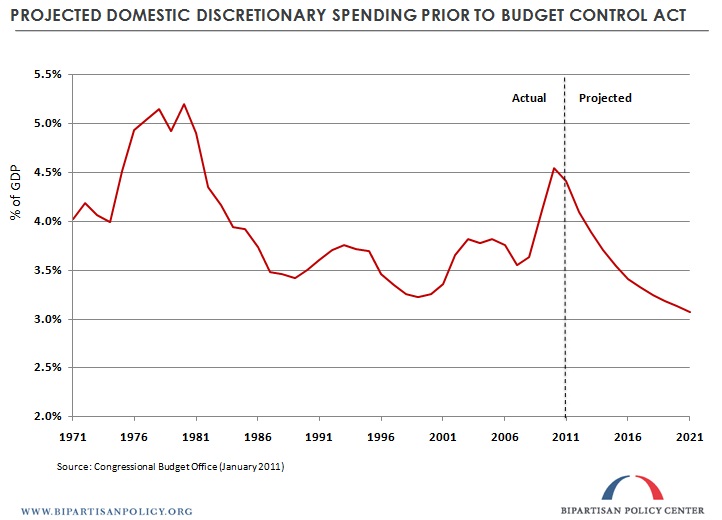 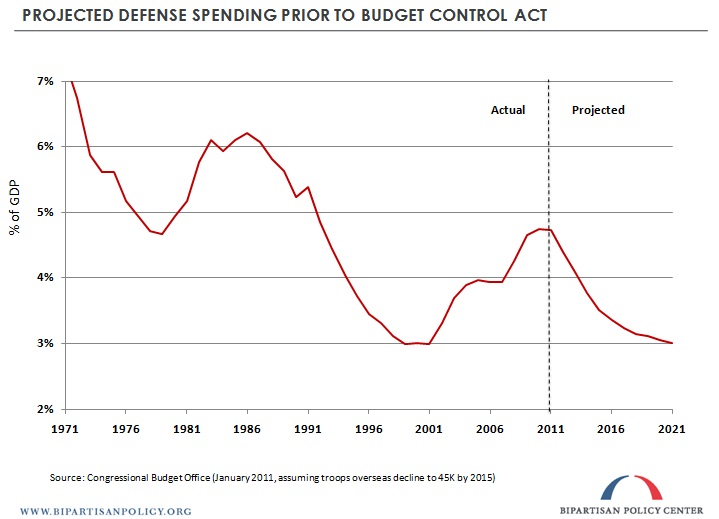 The BCA then made modest additional cuts and, more importantly for the medium-term budget outlook, placed statutory caps on discretionary spending for each of the next ten years. These cap levels are similar to those proposed by the Domenici-Rivlin Task Force last year. Many ardent advocates of those spending categories contend that these cuts already are too austere, and that they will be too painful for some in society or harmful to our national defense. In normal times, these concerns might win the day, but this restraint falls into the category of necessary difficult choices that must be made to restore our budget sustainability.

Slashing an additional $1.2 trillion by sequester, however, cannot be similarly characterized. These cuts would be drastic and substantial.

First, let’s look at them numerically. As we have previously discussed, the sequester alone would result in roughly a 7.5 percent cut from domestic discretionary spending and a 10 percent cut from defense. When combined with the first round of BCA reductions, the sequestration would amount to a real 16% domestic cut and a real 18% defense cut [1] from today’s levels. [For more details, see the chart at the bottom of this post.]

The scope also can be illustrated visually. The sequester would bring both spending categories well below their modern-era troughs: 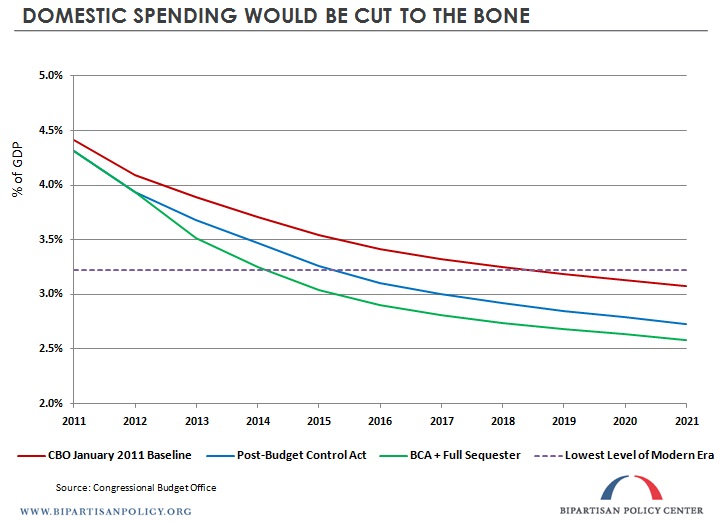 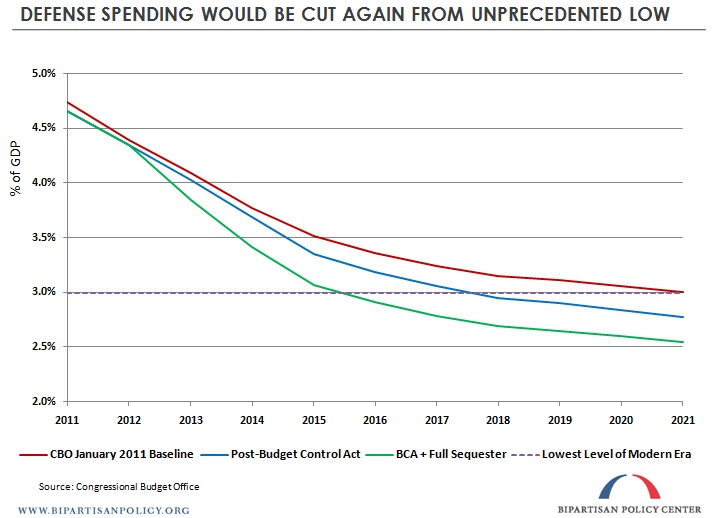 Finally, one doesn’t have to look very far to find prominent figures who translate this data into real-world impact. In fact, there are many Democrats who agree that the defense cuts under the sequester are undesirable and potentially dangerous. Take Secretary of Defense Leon Panetta, who has described the trigger as “dangerous, across-the-board defense cuts that would do real damage to our security, our troops and their families, and their ability to protect the nation.” He added: “This potential deep cut in defense spending is not meant as policy.”

Similarly, there are notable Republicans who are normally in favor of domestic spending restraint confirming that the depth of these cuts could be harmful. Bill Hoagland, former Republican staff director of the Senate Budget Committee and member of the Domenici-Rivlin Task Force, says that we would be “sacrificing the investment areas of our federal budget, the seed corn for future economic growth, on the altar of current consumption.”

When these types of leaders are crossing stereotypical party lines in both directions to warn of an imminent threat, the matter at hand deserves special scrutiny and skepticism.

2. The sequester will not stabilize our debt or solve our fiscal problems

As we detailed in a previous post, the sequester will not substantially bend the long-term trajectory of our debt curve. The reasoning behind this is quite simple.

The current federal budget (outside of interest on the debt) can be broken down into five relatively equal spending categories: 1) defense spending, 2) domestic discretionary spending, 3) Social Security, 4) healthcare (including Medicare and Medicaid), and 5) other mandatory spending or “entitlement” programs. The first two categories (often referred to together as “discretionary spending”) are appropriated annually ? meaning that the Congress approves spending levels every year ? while the latter three are mandatory, or direct, spending. 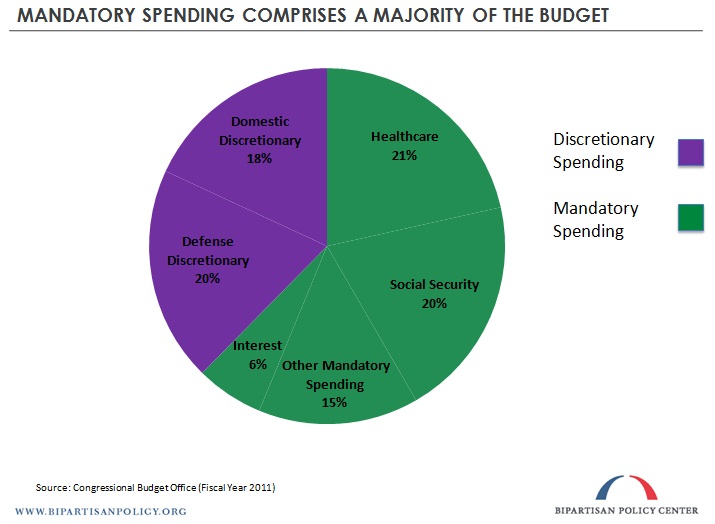 The vast majority of the cuts in the BCA and its sequester fall on the discretionary slices of the budget. The agreement places next to no restraint on any of the mandatory spending categories or on the revenue side of the equation. This means that we have only made adjustments to two-fifths of one side of the government’s budget ledger! No wonder we haven’t solved the problem.

Furthermore, as the following chart demonstrates, the discretionary spending part of the budget is not even the cause of our fiscal imbalance: 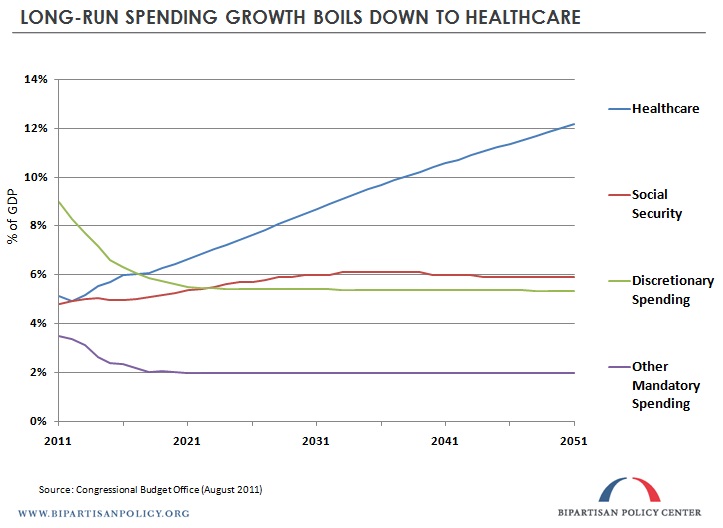 Healthcare clearly is the driving force behind rising government spending in the coming decades. Here is another chart that reinforces the point. This one shows the changing composition of federal spending, with healthcare increasingly crowding out other priorities: 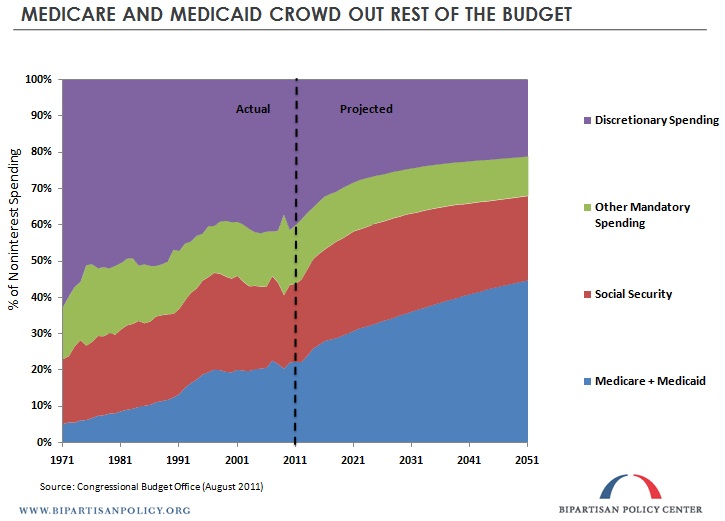 As former Senate Budget Committee Chairman Pete Domenici (R-NM) often quips, “if Democrats won’t budge on healthcare and other entitlements, and Republicans won’t budge on revenues, then regardless of what else we do, our debt problem will remain unresolved.”

We need to move off of this familiar and all-too-worn path. The JSC should seriously engage on entitlement and tax reforms that are sorely needed. The country will continue on an irresponsible and dangerous course if Congress maintains its myopic focus on cutting a shrinking portion of the budget simply because it lacks the will to tackle entitlement programs and revenues.

Some analysts view Congress’ delegation of the problem to a committee as a “punt.” That may have merit, but the fact is that we are now presented with an important opportunity: the ability to have an up-or-down vote in both houses on whatever proposals the JSC recommends. This advantage should not be taken lightly, as we may not have such a chance again.

Confronting difficult choices is never easy, but continuing to procrastinate and avoiding the crux of the problem will further damage our reputation. The JSC has been entrusted with the power it needs to do this job for the American people; now, do the job it must.

[1] This percentage would be on top of the savings from a projected troop drawdown in overseas operations. To view and share the graphs above, click here. 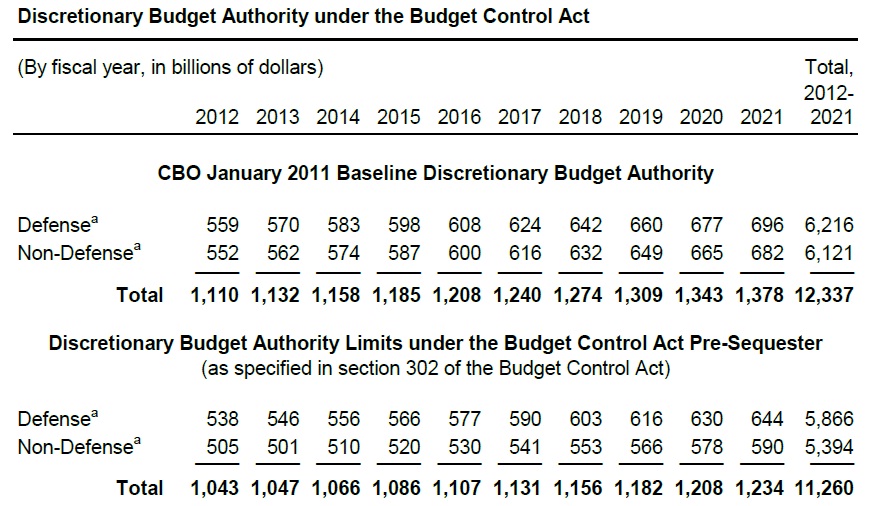 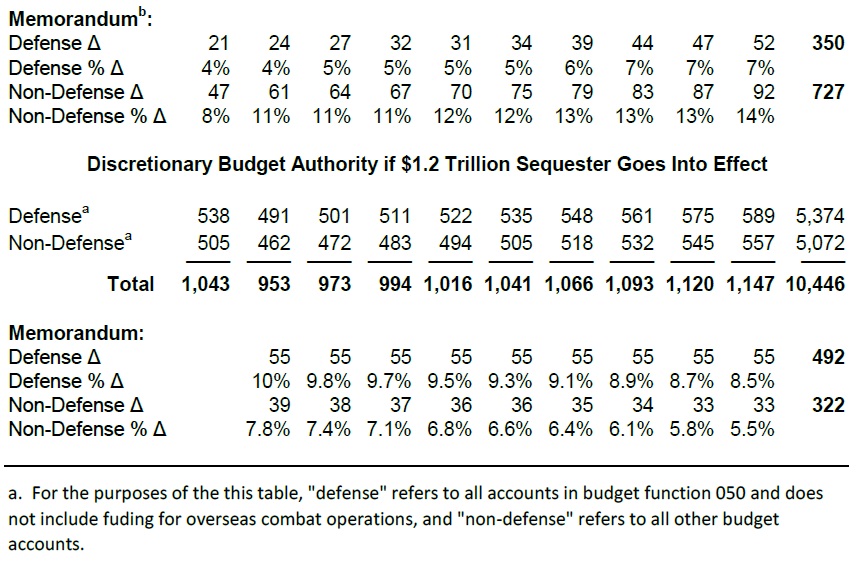