The federal government has opened the spending spigot for the first time in a decade by sending $380 million to the states to secure their elections. It is a great first step that will impact the 2018 midterm elections, but a consistent congressional funding commitment is necessary to maintaining security and the voting systems.

A Bipartisan Policy Center analysis of state expenditure plans reveals that only about $30 million, or 8 percent, of the congressional appropriation is expected to be spent prior to the  midterm elections on Tuesday. 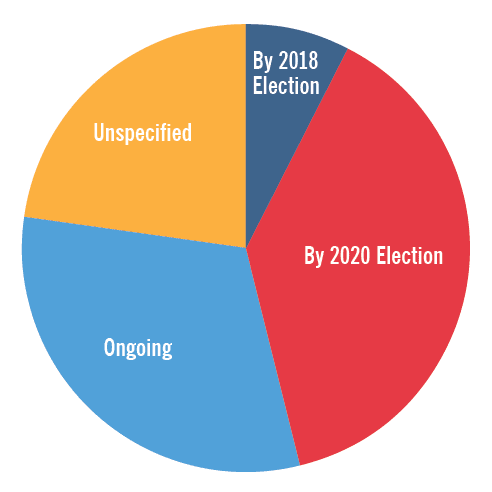 This makes sense. Many of the most pressing short-term cybersecurity improvements, such as vulnerability scans, system hardening, and additional trainings, are either relatively inexpensive or were provided free of charge by the Department of Homeland Security.

Additionally, a March 2018 appropriation of funds simply did not give states enough time to effectively plan large-scale changes to their election systems, especially when many states were already in the midst of primary election preparations. States also are being thoughtful about election expenditure decisions, which is a positive sign of a lesson learned from 2002, when several states that rushed to spend their original Help America Vote Act (HAVA) allocations purchased expensive paperless voting systems that have since fallen out of favor.

The U.S. Election Assistance Commission, which is responsible for doling out the money to states, deserves commendation for its speedy turnaround of federal funds. Every state’s funding request was received and approved by July. By the end of August, 96 percent of all federal funding had been disbursed to states with the remaining funds tied up due to state administrative issues.

The majority of short-term expenditures expected to be made this year focus on cybersecurity improvements, including additional monitoring sensors, software and firewall upgrades, two-factor authentication, IT personnel hires, and training. Multiple states are also planning to swiftly spend funds on accessibility improvements, new voting machines, and registration system upgrades.

The real benefits of Congress’s 2018 appropriation will be realized starting in 2020. States are planning to spend an additional $154 million, or about 40 percent of the total allocation, before the 2020 presidential election. Spending priorities include updating voting equipment and registration systems, implementing post-election audits, and making additional cybersecurity and physical security improvements.


The funds appropriated in March came with a five-year spending window. However, nearly a third of all funding, $124 million, is earmarked for ongoing expenditures, such as permanent staff additions, continuous cybersecurity needs, and necessary maintenance costs. It is unclear how states will maintain these expenditures in the absence of additional federal money.

Congress initially appropriated money for elections back in 2002 under the Help America Vote Act. Out of $3.3 billion appropriated to states between 2002 and 2010, nearly $300 million has been left unspent and those funds have no time limit.

As of 2016, six states held on to at least 30 percent of their initial HAVA appropriations, while Massachusetts and Vermont held greater than half of their original allocations. West Virginia plans to combine the new funding with the remainder of its original allocation to provide matches for county expenditures on election equipment, physical security, cybersecurity, and e-pollbooks. Combined, these funds will total approximately $10 million in purchasing power. South Dakota and Vermont have made similar plans to combine old and new HAVA funds.

While states have used a variety of creative solutions to bridge frequently inadequate state appropriations with irregular federal funding, there is a better path forward to ensuring our election systems are properly maintained. Congress must facilitate better long-term planning for election administration with a consistent expectation that federal resources will be available in the future. There is a role for the federal government to play in ensuring a modern, secure election system. It is time we formalize that role going forward.

The State of Campaign Finance in the U.S.