As part of its inaugural town hall meeting on March 6, the Bipartisan Policy Center’s Commission on Political Reform posted a series of polling questions to take the pulse of the online audience tuning in for the event’s live webcast. One of the questions?“Does the extreme partisanship in Washington reflect the true make-up of the country?”?elicited more than 500 responses. The results were fairly decisive: 61 percent of respondents answered “no.” While that may not surprise you given the seemingly endless state of gridlock plaguing our nation’s capital, does the sentiment reflect reality?

Much has been said about the depressingly low popularity of Congress. It’s not uncommon to hear the Washington political establishment referred to as an ineffective, unresponsive entity, as if it appeared inside the Beltway with no roots in the prevailing political trends shaping the nation as a whole. Pundits, voters, and local and state officials of both parties regularly express their puzzlement over Washington’s inability to “get things done.” A February 23 Washington Post article included comments from five sitting governors worried about the impact of the sequester cuts. Here’s a sample:

“?I’m just worried about the federal government really destroying the economy of this country by continuing to spend more than they take in and not making the tough decisions,’ said Gov. Terry E. Branstad (R)…”

At first glance, the states represented by the governors mentioned in the article appear to cover a good mix of regions and political interests: Tennessee, Hawaii, Oklahoma, Maryland, and Iowa. Three of the statehouses are held by Republicans and two by Democrats. Here’s another bipartisan group of governors eager to take positive action, people cry, but are continually hindered by Washington’s shenanigans. Is there some truth in that argument? Without a doubt. There are a number of stories of bipartisan cooperation on the local and state levels that can serve as valuable lessons for Congress and the White House. However, it’s important to take another look at the five states listed above. Only one (Iowa) has at least some form of split control between its statehouse and two legislative bodies. In fact, a pattern of one-party rule has emerged nationwide.

In the aftermath of the 2012 elections, one party holds the legislature and governorship in 37 states (the largest share since 1952). Of those 37 states, seven have legislative supermajorities?“the threshold at which the legislature can override a gubernatorial veto or pass certain types of legislation that require more than a simple majority.” The trend has accelerated of late: 30 states were divided between the parties as recently as 2005. 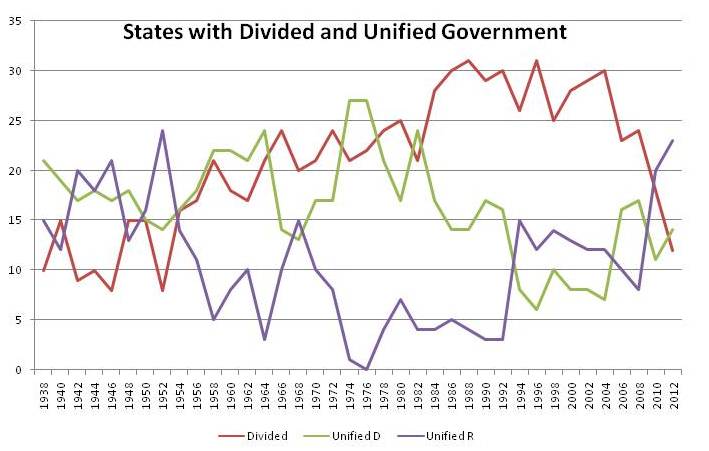 The implications of one-party control at the state level can easily be left out of the media narrative on polarization. If the trend continues, we’ll see a growing divide between state and federal policy on issues from energy to health care to transportation. Whereas the platforms and legislative accomplishments of each party could take on an increasingly harmonious direction and tone at the state level, Washington will continue to be home to a cacophony of divergent voices. For better or for worse, it’s much easier for today’s state politicians to get things done when one party is controlling the agenda. That’s a luxury on which Washington can’t rely.

In the end, frequent critics of the current dynamic shouldn’t be surprised by Washington gridlock when so many representatives hail from states in which little interaction with members of the opposite party is required to be successful. There’s nothing malicious or sinister about the development. Americans are sorting themselves both ideologically and geographically, and the new environment will take some getting used to.

9874
One party holds the legislature and statehouse in 37 of the 50 states?the largest share since 1952