This BPC-staff authored post is the 13th in a series that outlines the state of savings and retirement in America and provides a sense of the challenges that the commission seeks to address in its forthcoming report.

Today, the largest component of Social Security is the Old-Age and Survivors Insurance (OASI) program, which provides a basic monthly income beginning as early as age 62 to those who worked in covered jobs for at least 10 years, as well as current, former, and surviving spouses and minor children of those entitled to old-age benefits on the basis of their own work record. The OASI program also provides benefits for surviving dependents of covered workers who are deceased before age 62.2

According to the Social Security Trustees, 48 million retired workers, their dependents, and their survivors collected $706.8 billion in OASI benefits from Social Security in 2014. This income is a crucial lifeline for many older Americans: roughly half of married beneficiaries and three-quarters of single beneficiaries rely on the program for a majority of their income. In the same year, the other component of Social Security, the Disability Insurance program (DI), paid another $141.6 billion in benefits to 10.9 million disabled workers and their dependents. Essentially, Social Security disperses among society the cost of providing basic old-age and disability insurance to nearly all working Americans. 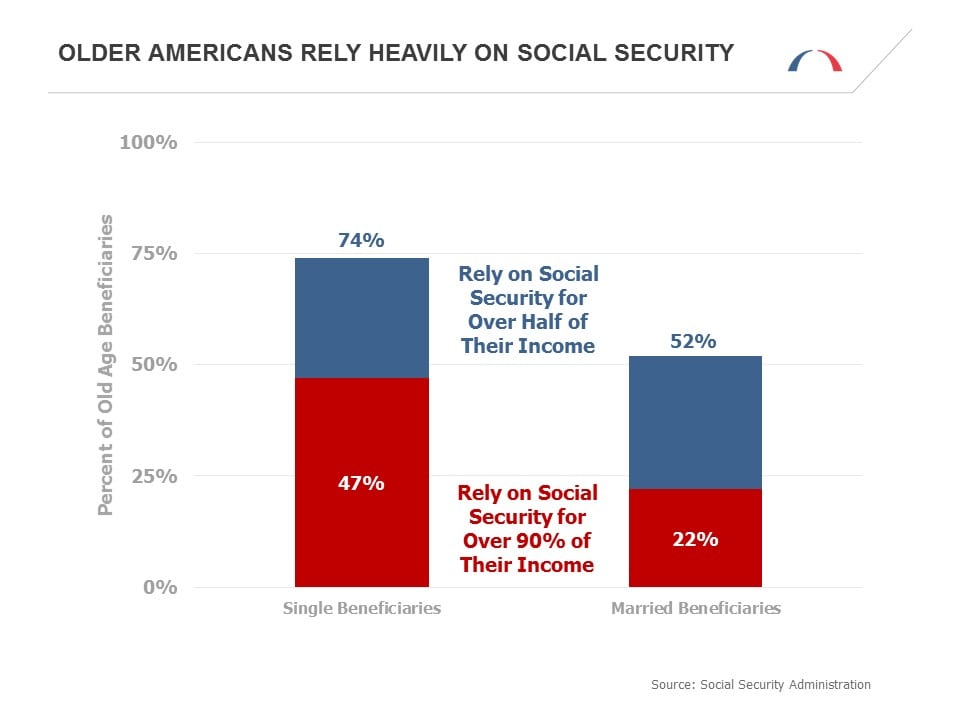 How does Social Security work?

Social Security is primarily financed by a 12.4 percent payroll and self-employment tax on earned income up to $118,500?called the “taxable maximum,” an amount indexed to economy-wide wage growth. Half of the tax is paid by the employee and half is paid by the employer; self-employed individuals pay the whole tax. Of this 12.4 percent, 10.6 percent is allocated to OASI and 1.8 percent is allocated to DI.

OASI beneficiaries receive a monthly benefit that depends on two factors: 1) their average earnings during working years; and 2) the age at which they elect to receive benefits. Although higher average wages translate into higher benefits, the program is also progressive, meaning it uses a benefit formula that replaces a greater percentage of earnings for lower earners than higher ones. The Full Retirement Age (FRA), when individuals are entitled to their “full” benefit, is currently set at age 66, though it will gradually increase to 67 by 2027. Workers can, however, claim proportionally reduced benefits at any time after age 62. Conversely, those who wait and claim beyond the FRA receive larger monthly benefits up to age 70. This actuarial adjustment is intended to roughly equalize expected lifetime benefits for an individual with average life expectancy no matter when they claim. To account for economy-wide inflation, benefits receive an annual cost-of-living adjustment (COLA).

In years when Social Security collects more in taxes than it pays in benefits, the Treasury Department credits surpluses (in the form of Treasury securities) to two separate trust funds, the OASI Trust Fund and the DI Trust Fund.3 In years when the trust funds run deficits, OASI and DI Trust Fund securities can be redeemed for cash to pay OASI or DI benefits, respectively, up until the relevant trust fund is exhausted. Current projections suggest that the OASI Trust Fund will be depleted by 2034 without any action on the part of policymakers, while the DI Trust Fund will be exhausted in the fourth quarter of next year. According to current law, trust fund exhaustion would lead to a steep reduction in benefits?namely to the level payable by incoming revenue. That would mean an across-the-board cut of approximately 19 percent for DI in 2016 and 25 percent for OASI in 2034. Although policymakers are unlikely to let these cuts happen, they must take action to prevent them. The depletion dates are not far in the future, which is why so many Americans lack confidence in the future of Social Security. 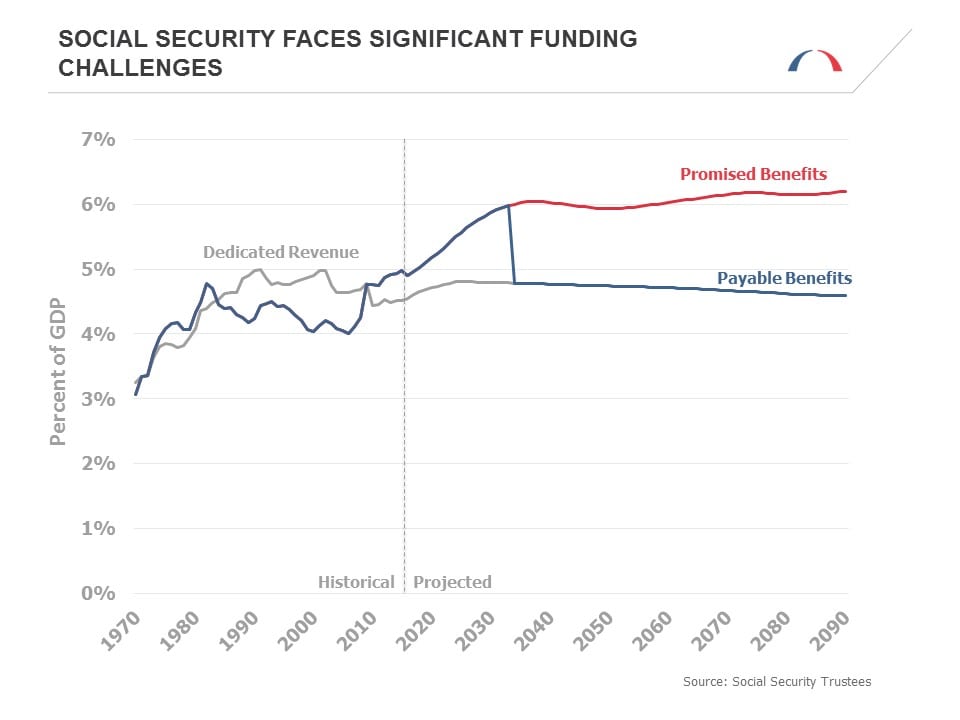 What is behind the financing challenges facing the program?

Social Security’s financing challenges are due to both changing demographics and the “pay-as-you-go” design of the system. Today’s workers are mostly financing the benefits of the previous generation rather than their own benefits?and the ratio of workers to beneficiaries is shrinking: it has already dropped from 4:1 in 1965 to 3:1 today, and it is projected to drop to just over 2:1 in 2030 as the baby boomers continue to retire. The shrinking of this ratio is exacerbated by increases in average life expectancy. Since 1945, life expectancy at age 65 has increased by over six years for both men and women. As more people spend a greater proportion of their lives in retirement, the lifetime cost of Social Security benefits increases, leading to more rapid depletion of the OASI Trust Fund.

Rising wage inequality in the U.S. has also contributed to the shortfall facing Social Security. Wages above the taxable maximum have increased at a faster rate than average wages, meaning a larger share of Americans’ earnings are thus above the cap and not being taxed. While nearly 90 percent of earned income was below the taxable maximum in the early 1980s, today that number is 82.5 percent. As the percentage of national income subject to the Social Security taxes dwindles, funding for the program erodes .

Some of Social Security’s Provisions May Be Outdated

Spousal benefits were also developed with an earlier generation in mind. In most cases, the spouse of a covered worker who reaches eligibility age is guaranteed a monthly OASI benefit that is at least half of their spouse’s (the covered worker’s).4 This is true both for those who have not earned any Social Security benefits on the basis of their own earnings and for those whose old-age benefit based upon their own earnings record would be smaller than half of their spouse’s benefit (for whom the spousal benefit tops up their worker benefit).5 With more two-earner couples in the workforce than ever before, many of those who receive spousal benefits exceeding any old-age benefit on the basis of their own earnings are those fortunate enough to be married to a high-earning individual.6

An additional issue, resulting from increased longevity, is that benefits are becoming inadequate for workers who retire early and/or live long lives. Almost 40 percent of American workers who turned 62 in 2013 claimed benefits that year, meaning that they claimed at their earliest eligibility age. Those with lower lifetime earnings are more likely to claim Social Security benefits as soon as they are available, often due to a lack of personal savings, higher likelihood of unemployment, or the nature of the occupations in which many are employed. Under the current system, however, the earlier a beneficiary decides to receive payments, the greater the reduction in their monthly benefits. The impact of this reduction compounds as beneficiaries live longer in retirement, increasing the risk that they outlive their savings and cannot get by on reduced Social Security benefits alone. While claiming at age 62 may be the only option for some Americans who can no longer work, the early-claiming opportunity also simply appears attractive to others and puts both groups at risk of inadequate income later in old age.

Social Security is the bedrock of retirement security for most Americans. But to maintain that position, it needs to be modernized and put on more secure footing. There are literally hundreds of proposals to improve the system that have been introduced over the last several years. Policymakers should give them serious consideration and do so in the context of the entire American retirement system, as BPC’s Commission on Retirement Security and Personal Savings is attempting to do.

The longer Social Security reform is put off, the less time there will be to phase changes in and give future retirees time to adjust. As we celebrate all that Social Security has done over the last 80 years to improve retirement security in America and assist some of the most vulnerable in society, we should consider how to ensure that it continues to do so for the next 80 years to come.

1 This 1935 law also established ongoing federal support for state-run unemployment insurance and means-tested safety-net programs for certain categories of Americans, focusing on impoverished mothers, children, and Americans over age 65, as well as children with disabilities. These programs were the forerunners of the modern American social insurance and welfare state. Medicare and Medicaid were added to the Social Security Act in 1965. Supplemental Security Income was added in 1972. The original 1935 Aid to Dependent Children program was expanded over the years and then transformed into the modern Temporary Assistance to Needy Families program in the 1996 welfare reform.

2 Some workers, such as those employed by certain state and local governments, are not covered by Social Security.

3 The trust funds also earn interest on these securities and are credited with a portion of the revenue generated by the income taxation of Social Security benefits.

4 Individuals can receive benefits based on a former spouse’s work record if the marriage lasted at least 10 years.

5 Special rules apply for spouses who worked outside of covered employment. For more information, see here.

6 Couples can sometimes game the system to increase their lifetime OASI benefits through claiming strategies that utilize arcane aspects of the spousal benefit and other program rules.

Senate Defense Bill: The Good, The Bad and The Ugly