Before Congress left for recess, the Senate passed by unanimous consent a number of provisions from the proposed Energy Savings and Industrial Competitiveness Act (S. 1000), co-sponsored by Senators Jeanne Shaheen (D-NH) and Rob Portman (R-OH). Parts of this bipartisan bill were included as an amendment to the Enabling Energy Savings Innovations Act (H.R. 4850), which had previously passed the House on June 26.

H.R. 4850 exempts some walk-in coolers and freezers from certain insulation efficiency standards if the unit’s design is as energy efficient as if the standards were in place. Moving forward, the Senate-passed version of H.R. 4850, containing the Shaheen-Portman provisions, is expected to return to the House for a floor vote or go to a conference committee.

Not all of the provisions of the original Shaheen-Portman legislation were included in the Senate amendment; in an attempt to ensure broad support from the House of Representatives certain elements of the legislation were removed. The building and building efficiency finance provisions were completely stripped out in addition to some rebate/incentive programs among others. The remaining policies target industrial and federal agency energy efficiency. Senator Portman summed up the amendment’s contents by saying, “Our amendment, while not everything we wanted, takes some reasonable and commonsense steps to ensure the federal government is coordinating with industrial manufacturers in developing and deploying industrial efficiency technologies, and places additional energy efficiency requirements on the federal government that will ultimately save money for the U.S. taxpayer.” Figures 1 and 2 present an overview and explanation of what made the cut and what did not. 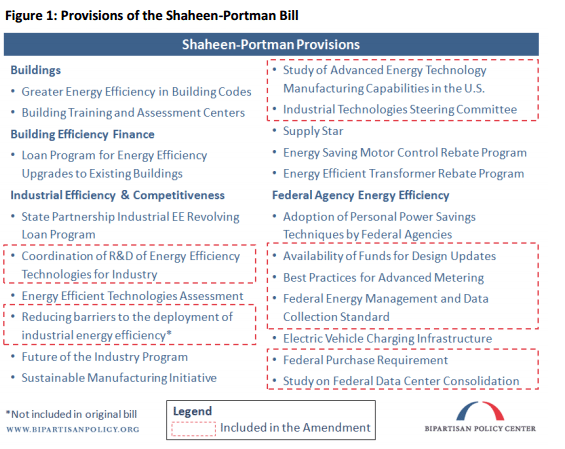 For larger versions of the images above, click here.

There is a long history of bipartisan Congressional legislation on energy efficiency. For example, appliance standards for energy efficiency were first passed in 1987 under President Ronald Reagan, with updates passed four additional times, each with bipartisan support. The 2005 Energy Policy Act was passed during a GOP Congress and the 2007 Energy Independence and Security Act was enacted while the Democrats controlled the House and Senate; both pieces of legislation advanced energy efficiency measures, and both were signed by President George W. Bush.

With this bill, the bipartisan tradition continues. Central to the successful passage of many elements of the Shaheen-Portman legislation was the support from a number of diverse groups and interests from the Sierra Club to the U.S. Chamber of Commerce. Within the political arena, the bill has strong bipartisan support, clearly as evidenced by its two co-sponsors. After the amendment’s passage, Senator Shaheen remarked, “We are very pleased to see the Senate recognize the economic and environmental impacts of our bipartisan energy efficiency bill by passing these important industrial and federal agency efficiency provisions.” The co-sponsors indicated that they will continue to advocate for the passage of the rest of the bipartisan bill’s provisions not included in the amendment.