In 2011, the federal government funded about one-third of all research and development in the U.S., and around 40 percent of basic research in science and medicine. Scientists and supportive organizations have written numerous articles, reports, and letters attesting to the role that those funds play in enabling research at universities, colleges, teaching hospitals, private research labs, and government facilities.

We believe that detailing the sequester cuts and their impact ? as the Bipartisan Policy Center (BPC) has done for the Department of Defense (DoD) ? adds important context to the ongoing policy debate over the sequester. In short, cuts this year inconvenienced many researchers, but the largest effects of cuts to research funding will only manifest themselves years down the road in the form of undiscovered medications, technologies, and other innovations. In a recent interview, the director of the Center for Computational Biology at Johns Hopkins University in Baltimore, Steven Salzberg, said, “Less science is getting done. That means cures won’t emerge. Five years from now, when your aunt gets cancer and you can’t do anything for her, people won’t stop and think, ?Jesus, if we only hadn’t had the sequester!’”

The Fiscal Year (FY) 2013 sequester impacted funding for basic health and scientific research, especially the availability of new grants. For some researchers, this has meant delays in starting new projects or in completing ongoing ones?or even cancellation of research that is already underway. For graduate schools and research labs, cuts to current and anticipated funding meant cutting back the number of incoming students, leaving admitted students without funding, and laying off staff.

If the sequester process were to continue for the next eight years, as current law requires, the damage to the nation’s science research would be enormous. Recently, Northrop Grumman CEO Wesley Bush described the impact of sequestration on research and development as “not linear.” Years of meager support will degrade the country’s scientific infrastructure and workforce to the point that resuming halted research will become impossible. “The longer you go in raiding the R&D capacity of the nation, the harder it will be for us to ever recreate many of the institutions that are decaying under the sequester,” he said. 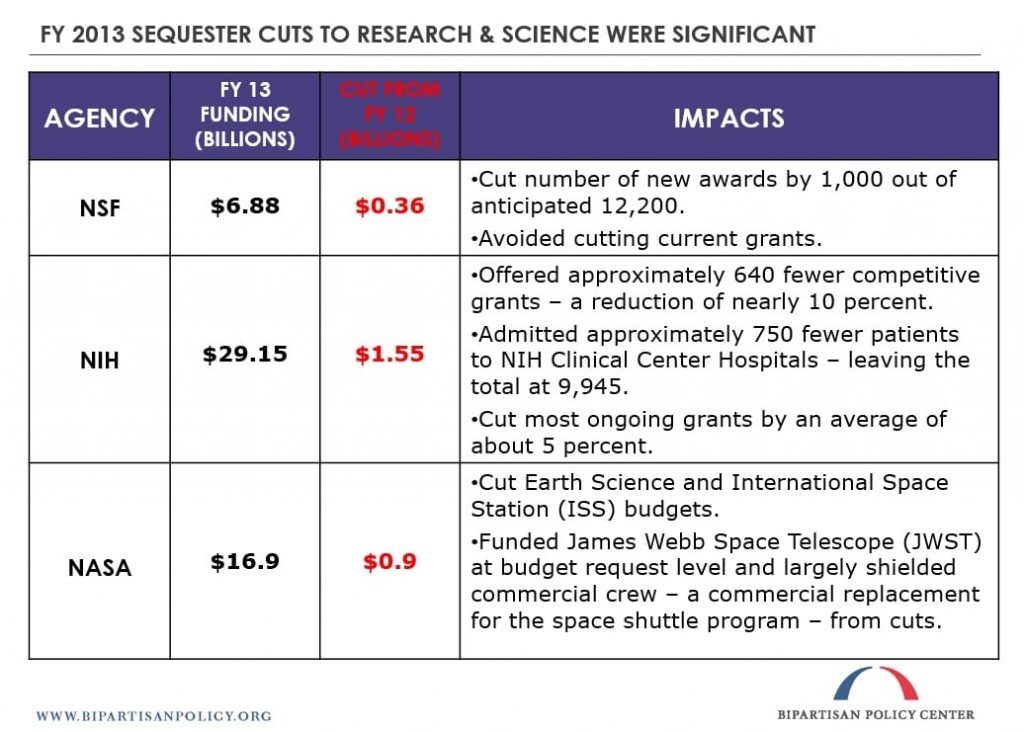 The changes that the sequester forced at the National Science Foundation (NSF), the National Institutes of Health (NIH), and NASA illustrate that the FY 2013 cuts had a serious impact on research. Further sequestration could do significant damage.

Each of these organizations presents a different example of how the sequester played out in FY 2013. The overall picture is one of uncomfortable, but not devastating, choices?yet.

For example, NASA was able to fund its FY 2013 priorities ? despite facing approximately $900 million in cuts relative to its FY 2012 budget ? by shifting monies away from less essential projects.1 In particular, the space agency was able to fully support the James Webb Space Telescope ? a replacement for the Hubble ? and restore sufficient funding to move forward with commercial crew, the commercial replacement for the space shuttle program. But doing so required real tradeoffs?the budget for operations aboard the International Space Station (ISS) was reduced significantly and commercial crew still received $300 million less than NASA requested.

Continuation of sequester-level funding would mean delaying major launches and technical milestones and cutting back scientific research conducted aboard the ISS. Such cuts could even counter intuitively produce larger budget shortfalls if the commercial crew program is delayed and NASA has to continue paying Russia approximately $70 million a seat to ferry astronauts to the ISS.

Similarly, cuts at the National Science Foundation (NSF) and the National Institutes of Health (NIH) were tangible this year?but the real harm lies in the future. Both managed to avoid furloughing any workers. But while NSF also avoided cutting current grants and met targets mainly by reducing the number of new awards, NIH cut both the value of ongoing grants and the number of new ones awarded.

The immediate cost of not awarding funding is difficult to quantify, but we do know that past government-funded research has yielded important innovations. Some, like the integrated circuit and the technologies behind touch screens and wireless communication, aided the development of important industries and the worldwide leadership of U.S. companies in those industries. Others, including virtually every major vaccine developed over the past 25 years, affect the American public more directly.

Additionally, cuts in the number of competitive grants awarded will likely disproportionately affect young researchers without a demonstrated history of quality research. Some in the scientific community, including the president of the Institute of Medicine and the former director of NIH, have publically worried about a “generation gap.” They fear that students will choose fields that offer more career stability, which could permanently damage the pipeline of young talent into scientific research.

The costs of cutting ongoing research are more apparent. The Framingham Heart Study (FHS), which started in 1948, has been so central to the understanding of cardiovascular health that it is the origin of the term “risk factor.” In 2013, FHS faced a cut of $4 million out of the approximately $9 million that makes up its core administrative grant from the NIH Heart, Lung, and Blood Institute. As a result, the study administrators cut 19 of the 90 staff on the project and will resort to telephone and email interviews rather than actual medical exams for the next round of data. Although FHS will continue in the face of these cutbacks, and administrators are hopeful that they can find other funding sources, the quality of the data will be lower if researchers rely on interviews rather than medical exams.

For NSF, NIH, and NASA, sequestration brought cuts in FY 2013 that were painful, but did not permanently damage the American scientific community. Continuing to absorb those cuts through 2021, however, would do more than briefly disrupt American scientific work. Such an outcome would produce a sustained slowdown in scientific innovation, leaving American businesses and consumers worse off, and could mean a missing generation of scientists, significantly limiting the talent available for academia and industry.

1 While the sequester cuts were “across-the-board,” they only cut down to a particular level of specificity. By reorganizing spending within the categories specified by the Office of Management and Budget (OMB), NASA was able to fund its priorities while still meeting sequestration requirements.

A Review of the Numbers: Discretionary Spending Levels, the Budget Control Act, and the Sequester