Across-the-board cuts that were originally scheduled to begin on January 2, 2013, under provisions specified by the Budget Control Act of 2011 (BCA) have now been postponed until March 1, following enactment of the American Taxpayer Relief Act of 2012 (ATRA) at the end of the 112th Congress. And just a few weeks later, the Continuing Resolution (CR) that is currently funding the federal government will expire on March 27.

Over a year ago, the Bipartisan Policy Center (BPC) laid out “Everything You Need to Know about the Sequester,” followed shortly thereafter by a post focusing specifically on the unique aspects of the cuts for Fiscal Year (FY) 2013. Recent developments require an update and expansion of that post, which follows here.

The original FY 2013 sequester was intended to cut $109.3 billion from non-exempt federal spending, but in delaying the cuts, ATRA reduced that figure by $24 billion to $85.3 billion.* Further, certain recently-enacted spending ? extended unemployment insurance benefits and most of the aid for Hurricane Sandy relief ? is subject to the sequester.

Beyond the top line dollar amount, which is written into law, only so much can be said about sequestration with certainty because the law leaves some aspects subject to interpretation, but clearly grants the Office of Management and Budget (OMB) authority to carry out the automatic reductions. OMB’s final directive will be the one that counts.

Based on available information from OMB and the Congressional Budget Office (CBO), however, we can project how much of the $85.3 billion in FY 2013 sequester cuts will hit each section of the budget and the corresponding percentage reductions that these cuts entail. 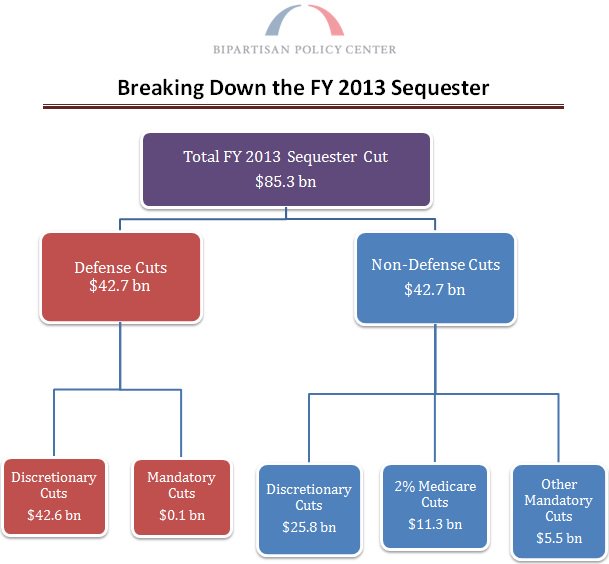 1) The BCA ? the legislation that created the sequester? instructs that half of the $85.3 billion be cut from non-defense programs and the other half from defense programs ($42.7 billion each).

2) Both the defense and non-defense cuts are then allocated according to specifications detailed in the BCA among discretionary (or annually appropriated) and mandatory funding that is not explicitly exempted.

3) OMB will then have to order agencies to reduce all non-exempt spending in each category across the board by the percentage necessary to achieve each of these amounts. Given that the reductions (with the exception of Medicare) will have to be achieved over only seven months, however, the effective percentage cuts will be even higher. 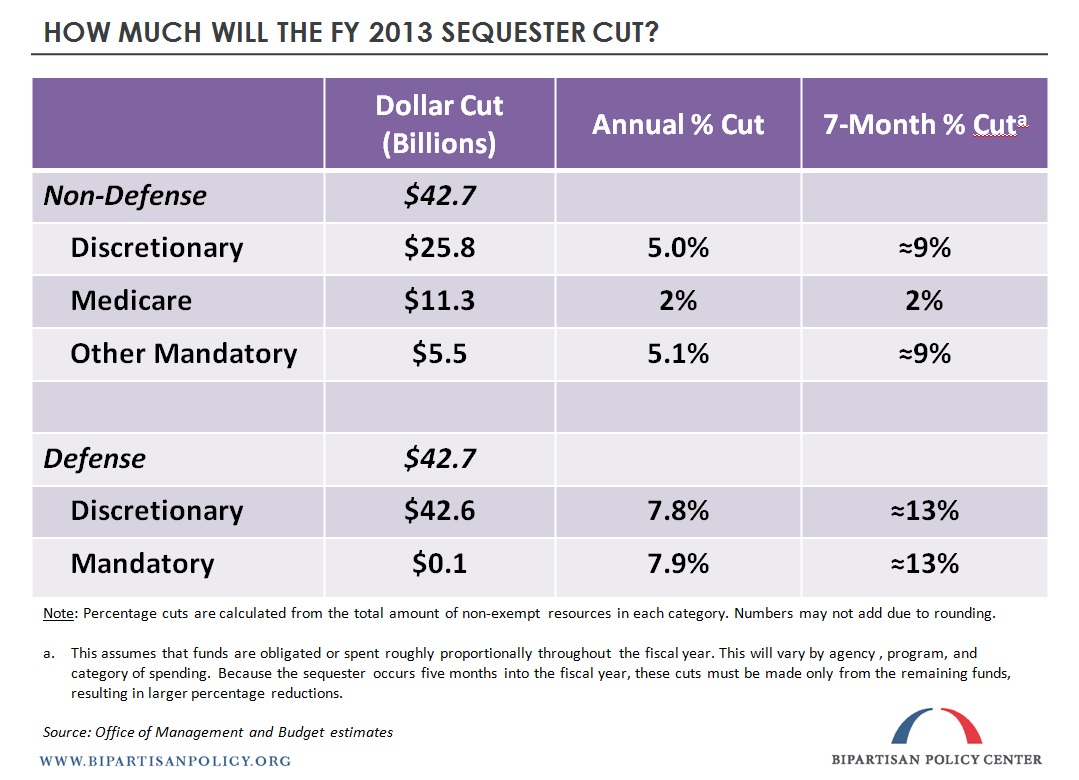 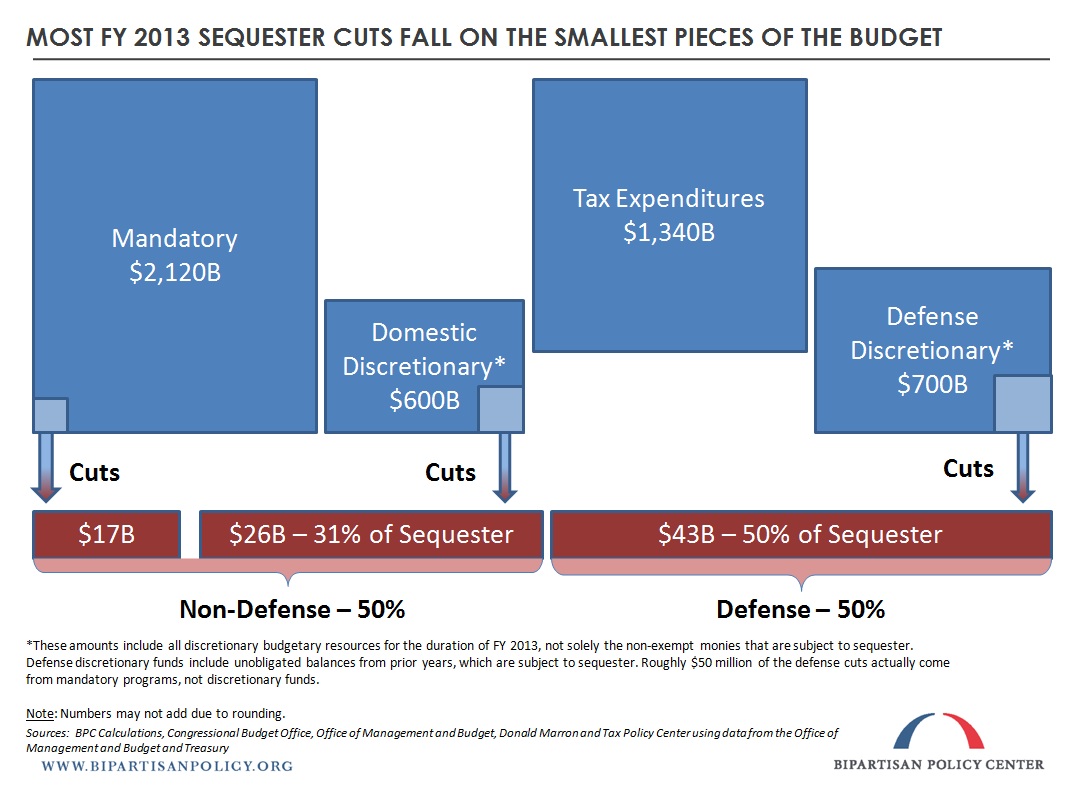 In addition to the March 1 sequester, which stems from the failure of the super committee, there is a second sequester of defense discretionary funds scheduled for March 27 because in the CR for FY 2013, Congress appropriated roughly $13 billion above the BCA cap of $544 billion.**

Therefore, on March 27, absent explicit legislation mandating otherwise, defense discretionary funding will be effectively cut by an additional approximately 4.5 percent over the final six months of FY 2013 (or approximately 2.4 percent on an annual basis). If combined with the March 1 sequester, defense spending would face an across-the-board cut of roughly 18 percent from its current CR level (if assumed to be extended for the remainder of the year).

Setting aside the magnitude of the reductions, the most difficult aspect of both the defense and domestic cuts is that they will be made across the board to all non-exempt government spending regardless of programs’ merits or demerits.*** The reductions designed by law are executed at the Program, Project & Activity (PPA) level of the federal budget, sometimes defined in appropriations bills and which often includes very granular categories of expenditures, such as “two Virginia Class Submarines” or “salaries and benefits” of a particular agency.

Absent a new law passed by Congress, the president has little ability to spare one type of spending and cut more from another. This creates uncertainty in both the public and private sector because there remains much to be determined about how PPAs will be defined by agency administrators and how the cuts will be implemented. This inability to plan is already acting as a drag on economic growth.

Furthermore, the immediate and across the board nature of the cuts, along with their magnitude concentrated in a seven-month period, will impair economic growth as the year progresses. At BPC, we estimated last year that the sequester would reduce 2013 gross domestic product (GDP) growth by half a percentage point, and would cost the economy approximately one million jobs over the next two years. More recent estimates released by the CBO and Macroeconomic Advisors have roughly confirmed these projections. 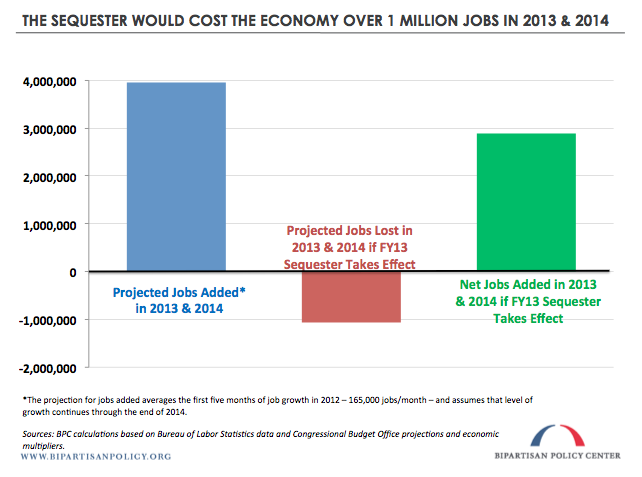 Sequestration’s effect will be akin to that of a slow motion train wreck. The uncertainty has already impacted economic growth, and while there won’t be a sudden “cliff” that occurs on March 1, the ramifications will steadily worsen as time passes.

If sequestration remains in effect, then the BCA statutory spending caps for 2014 thru 2021 will be revised downward for both defense and non-defense discretionary spending.**** If that occurs, then by 2021 both domestic and defense discretionary spending will be at modern-era lows as a share of the economy. Finally, even after the aforementioned consequences and after nine years of these reductions, our debt-to-GDP ratio is only projected to reach 100 percent two years later (2033) than it would have absent sequestration ? and that is a static estimate, meaning that it does not take into account the inevitable unexpected costs entailed by these types of cuts.***** The lesson from this exercise in formulistic budgeting, focusing debt and deficit reduction on portions of the federal budget that are not the major contributors to spending growth, is that we can expect much pain for little gain. 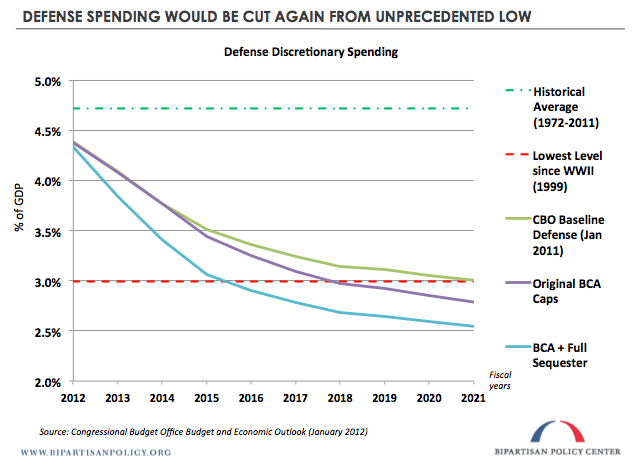 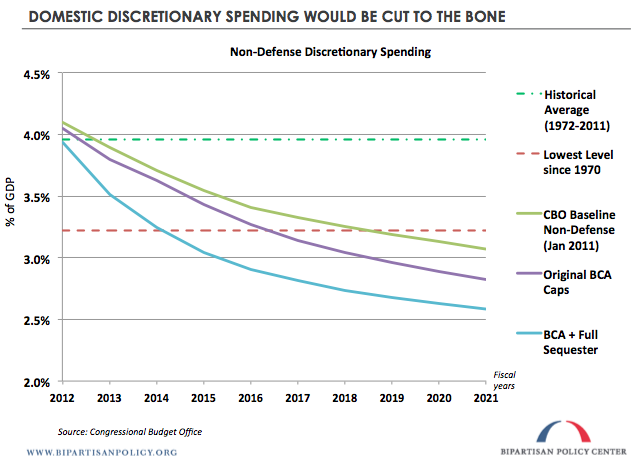 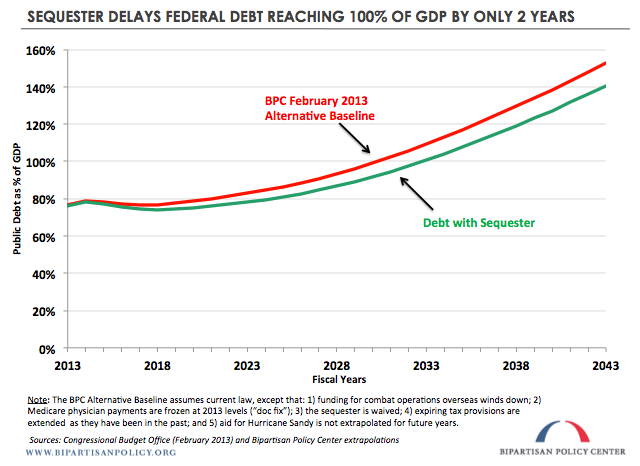 * To read more about how the alleviation of these cuts was “offset,” see the Committee for a Responsible Federal Budget’s explanation in this post (#s 1 and 3).

*** The traditional functions of reprogramming and transfer authority will provide the executive branch with a very limited capability to make adjustments to the sequester cuts. A forthcoming post will describe these tools in greater detail.

**** Those cuts will be $109.3 billion per year and will also be across the board to non-exempt mandatory spending programs, but for discretionary spending, as stated, the cuts will take the form of reduced defense and non-defense caps from the levels enacted in the Budget Control Act of 2011.

***** Even with the cuts from sequestration, debt held by the public is projected to remain high by historical standards, standing at 75 percent of GDP in 2021.