Yesterday, Senators Jeanne Shaheen (D-NH) and Rob Portman (R-OH) re-released The Energy Savings and Industrial Competitiveness Act, a bipartisan bill that works to improve energy efficiency in buildings, the manufacturing sector, and the federal government. The senators were joined on Capitol Hill by industry leaders, environmental advocates, labor proponents, energy efficiency supporters, and trade associations, showcasing the broad base of support for the legislation. BPC also strongly supports this bipartisan legislation, as outlined in a recent letter from the co-chairs of the BPC’s Strategic Energy Policy Initiative. The initiative released a broad set of policy recommendations in February, several of which overlap thematically with the Shaheen-Portman legislation.

This legislation builds on the strong tradition of bipartisanship in energy efficiency with the goals of reducing costs for businesses and consumers, bolstering U.S. competitiveness, and reducing environmental impacts. Senator Shaheen highlighted these benefits by saying, “Energy efficiency is the fastest, most cost-efficient way to tackle our energy needs and keep our economy competitive all while creating needed and sustainable jobs. Passing this bill would be a clear and quick win for the economy, taxpayers and the environment.”

Previously introduced in May 2011, the revised legislation does not include all of the original provisions; some were dropped or revised, while others have already become law as amendments to other legislation. For example, the legislation expands the provision on electric vehicle charging infrastructure to include also natural gas vehicles. However, the bill does not include the provisions on best practices for advanced metering, coordination of R&D on energy efficiency technologies for industry, or a federal energy management and data collection standard as those were passed in December as part of the American Energy Manufacturing Technical Corrections Act of 2012.

The largest changes are found in the financing provisions. The bill drops both the building loan program and the revolving loan program, but adds a private commercial building efficiency program. Under the new initiative, the Secretary of Energy is charged with providing grants to states “to establish or expand programs to promote the financing of energy efficiency retrofit projects for private sector and commercial buildings.” States have flexibility in which program to develop or expand; eligible programs include a revolving loan fund, a commercial Property Assessed Clean Energy (PACE) financing program, a utility on-bill financing program, and a program promoting the use of energy saving performance contracts among others.

A summary of all of the provisions included in the Shaheen-Portman bill can be found here. 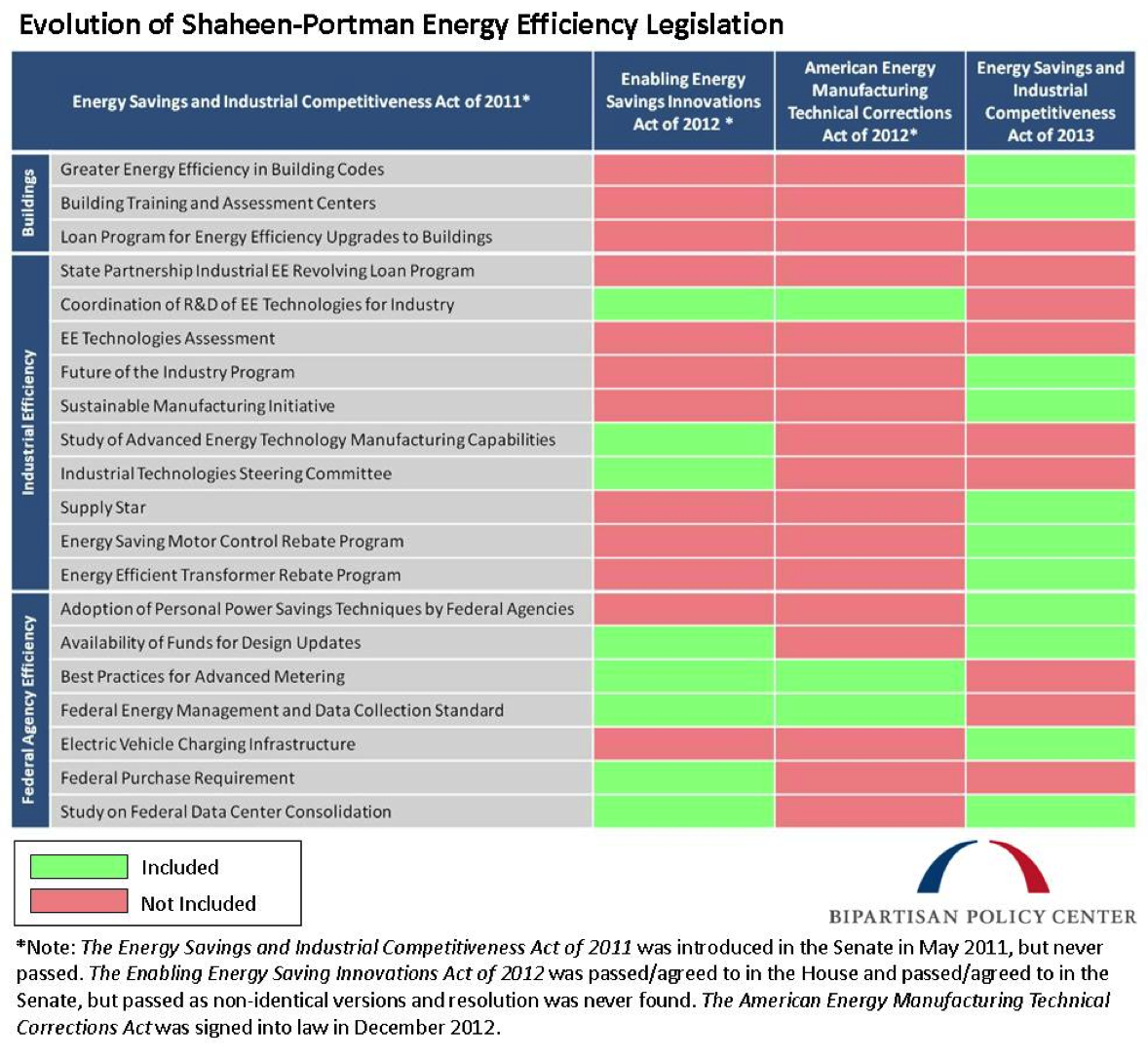 Given the bill’s potential benefits for the economy and the environment, Senator Shaheen and Senator Portman are confident that the deficit-neutral, bipartisan Energy Savings and Industrial Competitiveness Act of 2013 will become law. Senator Portman reiterated this sentiment by stating, “Washington can seem pretty divided these days, but there are some things on which we can all agree. This bill is one of them ? it’s good for the economy and good for the environment. By making it easier for employers to use energy efficient tools, we are helping them to reduce their costs, enabling them to put those savings toward expanding their companies and hiring new workers. Some of the original legislation’s provisions have already become law, and now it’s time to finish the job.”

Recent Posts from the Energy Project