This week, Senator Mark Pryor (D-Ark.) and a bipartisan group of Senators introduced The Quadrennial Energy Review Act of 2013. The bill authorizes “a high-level government-wide coordination council to submit a comprehensive review of current domestic capabilities and future energy needs, as well as the resources, technologies, and policy recommendations to meet them.” Such reviews would provide clear guidance on how to achieve our national energy goals and policies.

In November 2012, BPC’s Strategic Energy Policy Initiative released the first two of its upcoming 50 energy policy recommendations at the National Press Club: 1) to create a National Energy Strategy (NES) ? a brief, high-level document outlining broad energy goals, budget priorities and legislative agenda; and 2) to require a companion Quadrennial Energy Review (QER) that provides specific steps for implementing the NES, along with a review of existing policies and proposals for needed changes to those policies. (Both a summary and the full report are found on our website.) Below is the timeline we proposed for such a document. 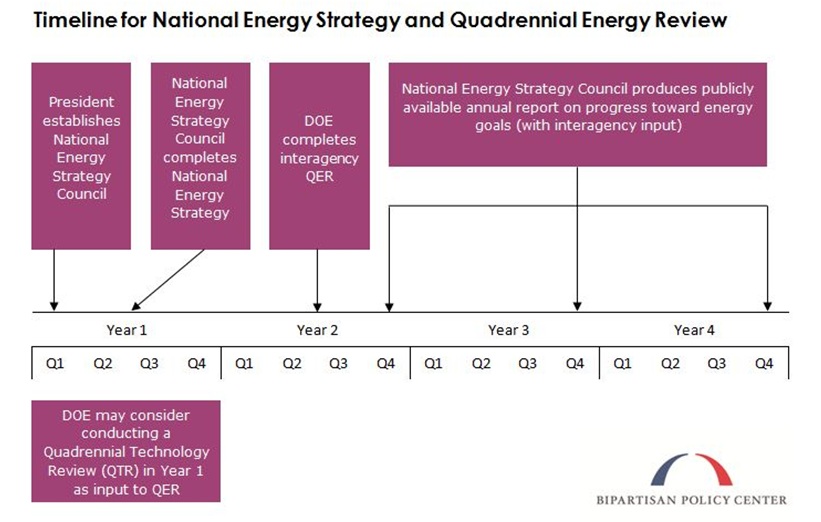 It is reassuring to see the numbers of supporters grow in the past few years for such a proposal. In addition to ourselves and the Senators proposing such legislation, the President’s Council of Advisors on Science and Technology and the American Energy Innovation Council have also called for the implementation of a QER process.

Energy remains one of the policy issues where bipartisan consensus can be reached. We applaud the hard, bipartisan work that being done on this issue that affects all Americans. We hope to see the bill move along in the legislative process and will do what we can to help it come to fruition.