It is a well-established fact that higher education tuition costs have increased rapidly in recent years. Between 2000 and 2015, average tuition at four-year, public universities almost doubled, from $4,900 to $9,700 (in inflation-adjusted dollars).

A tendency to blame this trend on state government has produced a narrative that points to declining state investment in higher education as the main reason for rising tuition prices. Indeed, revenues from tuition have comprised a growing share of total educational revenues for public higher-education institutions over the past 15 years?increasing from 29 percent to 46 percent between 2000 and 2015. 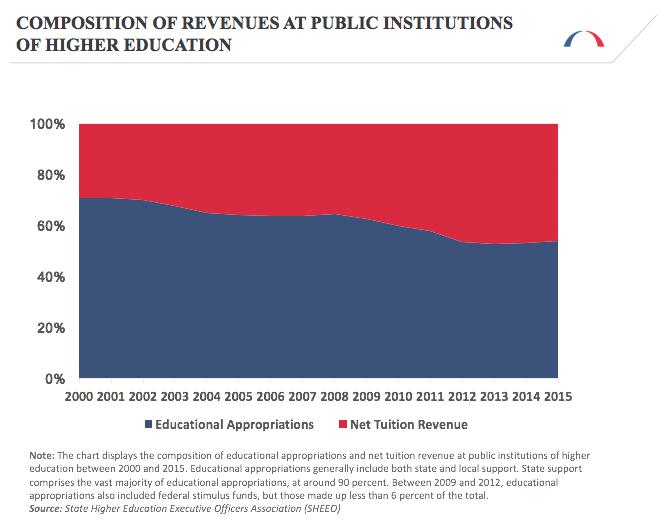 Criticizing state governments for rising tuition, however, warrants caution. States face a nearly impossible task in maintaining higher-education funding during a deep downturn like the Great Recession because of balanced budget requirements and declining revenues. Also, despite the ebb and flow of state support during the past 15 years, tuition prices have increased consistently?even in years when state funding grew. This raises questions about the fundamental premise that levels of state support are the overwhelming determining factor of changes in the cost of education faced by students.

Enrollment growth and budget strains left states in a bind

College attendance (measured by full-time equivalent (FTE) students) rose steeply in response to the Great Recession, growing by 14 percent between 2007 and 2010 at public institutions. Demand for higher education naturally tends to increase during tough economic times, as individuals with few job prospects are more likely to attend school.

At the same time, the Great Recession severely hampered state budgets. Between 2008 and 2009, state tax revenues (from sales, personal income, and corporate income taxes) dropped by 7.4 percent. And in 2010, 39 states made mid-year budget cuts totaling $18.3 billion.

The combination of these factors made it exceedingly difficult for states to maintain their higher-education funding at previous levels. With growing enrollments, declining tax revenues, and a host of competing budget priorities (such as Medicaid and K-12 education), per-student state support for higher education took a hit. 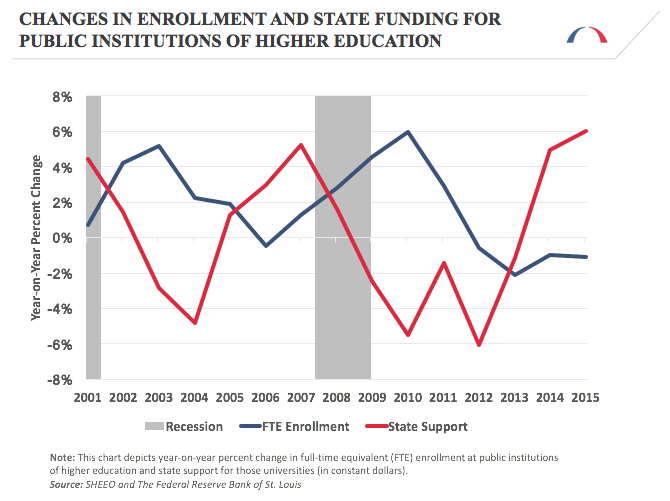 Importantly, however, this trend has reversed in recent years, with state support growing by 5 percent in 2014 and 6 percent in 2015. Enrollment has also declined consistently since 2012, as a robust economy has created job opportunities for those who might otherwise attend college. With state support per student once again rising significantly, concerns about long-term state disinvestment in higher education should be mitigated.

But suspicions persist about state spending being the main driver of tuition prices. With these recent periods of both growth and decline in state investment, that correlation can be examined.

Tuition at public institutions has risen consistently?even in years of increasing state support

Between 2000 and 2015, tuition at public universities rose relentlessly, nearly doubling in real terms over that period.  Meanwhile, as mentioned above, state funding has seen periods of relative growth and decline. 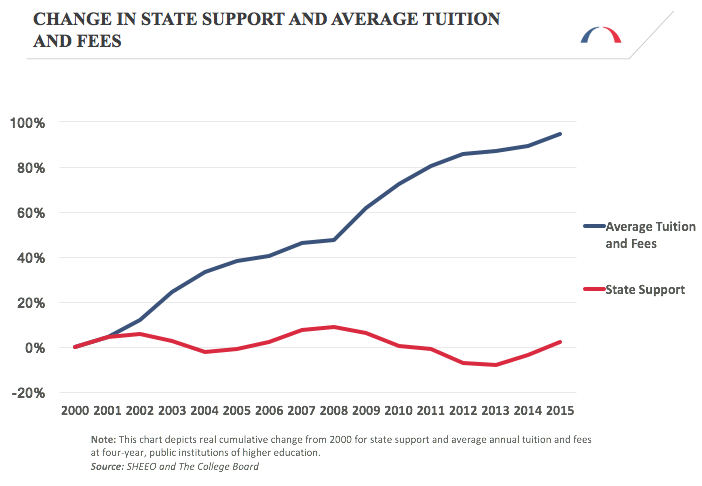 If state disinvestment were the overwhelming cause of rising tuition, prices would be expected to plateau or decline during periods of increased state support. This has not been the case.

Unfortunately, it is difficult to know the impact of state support for sure without establishing a counterfactual (e.g., analyzing what effect a sustained influx of state investment has on prices, or vice versa). Such an experiment is unlikely to naturally occur. Nonetheless, while state support likely has a role in influencing tuition prices, the data suggest that there are other more powerful forces at play.

It is easy to blame state governments for disinvesting in higher education and driving up tuition costs. A closer look at the trends, however, tells a more nuanced story, which does not squarely comport with the idea that states are pulling support and thus leaving institutions with no alternative aside from tuition hikes. Further research is warranted into the factors driving tuition prices, as this is a much more complex issue than the prevailing narrative implies.

Paying for Performance in Higher Education

Managing the Costs of Higher Education