Revenue sharing has been a popular topic in Congress for years, and especially this summer, as a number of proposals have emerged detailing new methods and programs for disbursing revenue from energy projects located on federal lands and on the Outer Continental Shelf.

Following a U.S. Senate Committee on Energy and Natural Resources hearing last month to consider one such proposal, we, at the BPC Energy Project, discussed the various current sources of federal and state revenues from natural resources, and how those revenues are disbursed. In this post, we 1) take a closer look at how revenues are both generated and allocated under existing law and 2) examine two select, recent legislative proposals that would change the allocation framework.

Federal lands are leased to project developers through competitive auctions. If a particular auction draws no bids, or if all bids are below $2 per acre, then the lands in question are offered for noncompetitive leasing on a first-come, first-served basis.1

Beyond the price determined at auction (referred to as the “bonus bid”), project developers pay the federal government both royalties and annual rental fees. The royalty payment is 12.5 percent of the value of the oil and/or natural gas produced on the land. The rental fee is $1.50 per acre for the first five years of the lease and $2 per acre thereafter.2

Broadly speaking, revenues from oil and natural gas leases are distributed three ways: 50 percent to the states in which the projects are located,3 40 percent to the U.S. Treasury’s Reclamation Fund, and the remainder to the Treasury’s General Fund.4,5

In general, coal leasing follows a competitive bidding process similar to that for oil and natural gas. The Bureau of Land Management (BLM) solicits bids on eligible tracts of land and announces the winning bid contingent on the satisfaction of other lessee requirements.6 The winning bid must also exceed the fair market value of the tract(s), which BLM determines prior to the lease sale and keeps confidential.7

Disbursement of coal revenues follows the same structure specified by the MLA for oil and gas: 50 percent to the states in which the projects are located, 40 percent to the U.S. Treasury’s Reclamation Fund, and the remainder to the Treasury’s General Fund.9

Pursuant to the Energy Policy Act of 2005, geothermal revenues are shared between states (50 percent), counties (25 percent), and the federal government (25 percent).12

Under the Federal Land Policy and Management Act of 1976, project developers looking to site wind and solar projects on federal lands must seek a right-of-way from one of two managing agencies?either BLM or the U.S. Forest Service, depending on the location of the proposed project. Right-of-way applications are processed on a first-come, first-served basis and not through a competitive leasing process, like those described above.13 The right-of-way holder is also generally required to pay fair market value for use of the land, and under current law 100 percent of the revenues are retained by the federal government. The Forest Service’s corresponding process?resulting in the issuance of “special use” permits14 ?has its own unique features, although many of its elements are similar to BLM’s.15

The Submerged Lands Act of 1953 provides states with the rights to the natural resources (and associated revenues) of submerged lands within 3 nautical miles of their coasts. For Texas and the western coast of Florida, this jurisdiction extends 9 miles.16 Beyond states’ jurisdiction, submerged lands are administered by the federal government for 200 nautical miles (and sometimes more), in accordance with accepted international law.17 These lands are commonly referred to as the Outer Continental Shelf (OCS). On behalf of the federal government, the Bureau of Ocean Energy Management (BOEM) is responsible for oil, gas, and other mineral leasing within this territory.18

Oil and gas revenue sharing with states is dictated primarily by two laws: the Outer Continental Shelf Lands Act (OCSLA) and the Gulf of Mexico Energy Security Act (GOMESA) of 2006. OCLSA is concerned with leases located just past states’ coastal boundaries within the first 3 nautical miles of federal jurisdiction?also known as the “8(g) zone.”19 The 1986 OCS Lands Act Amendments require that 27 percent of revenues from federal leases in the 8(g) zone be shared with the affected states. For certain other OCS leases, GOMESA stipulates that 37.5 percent of all revenues be shared with the four Gulf States?Alabama, Louisiana, Mississippi, and Texas?and their coastal political subdivisions (CPS’s). GOMESA also requires that 12.5 percent of such revenues be allocated to the Land and Water Conservation Fund (LWCF), which helps states and local governments with recreation and conservation goals. A second phase of revenue sharing is initiated under GOMESA beginning in Fiscal Year 2017. For Fiscal Years 2016 through 2055, a $500 million per-year cap is placed on the revenue allocated to states, their CPS’s, and the LWCF, though the cap does not apply to areas associated with GOMESA’s first phase.20,21

EPACT05 amended OCSLA to address offshore wind development on federal lands. Although final authority over development rests with the Secretary of the Interior, BOEM is responsible for evaluating wind energy projects on the OCS.

EPACT05 also directs BOEM to share 27 percent of offshore wind revenues with affected states. A final rulemaking issued by the Department of the Interior in 2009 provides specifics on the method of allocation, based on the projects’ locations, states’ coastlines, and states’ coastal boundaries. Under this framework, it is possible that multiple states may share the revenues from a single project.22

In February 2013, Senator Jon Tester (D-MT) reintroduced The Public Land Renewable Energy Development Act of 2013 (S. 279), which proposes to make the process for onshore federal solar and wind permitting more like that for oil, natural gas, and geothermal. The bill received bipartisan support from 7 cosponsors,23 and would establish a competitive process (first through a pilot program) to lease eligible wind and solar sites to qualified bidders. It would also create a “Renewable Energy Resource Conservation Fund”24 within the Treasury to offset the impacts of renewable energy development on communities.

Under the proposed bill, 35 percent of solar and wind revenues would be deposited into the conservation fund, 15 percent would be used to aid BLM in renewable permit processing, and the remainder would be shared among the states and counties within which the projects are located (25 percent each).

In July 2013, Senator Lisa Murkowski (R-AK) introduced the Fixing America’s Inequities with Revenues Act of 2013 (the FAIR Act of 2013) with 3 Democratic cosponsors.25 The bill includes provisions that apply to both onshore and offshore energy production on federal lands. For onshore lands, half of the revenues from renewable energy production would be shared with states, as is currently done for oil, gas, coal, and geothermal. For offshore lands, 37.5 percent of revenues from all sources ? both fossil and renewable ? would be shared with states. The FAIR Act would also gradually lift GOMESA’s $500 million per-year cap on revenue sharing and accelerate the commencement of its second phase from 2017 to 2013.26

For renewable energy projects, the FAIR Act is similar to S. 279 in that it increases the proportion of revenues from onshore renewable energy development that would be shared with states. However, the FAIR Act is broader in scope ? addressing multiple energy sources as well as offshore production ? while S. 279 includes provisions to more specifically direct the federal government’s share of funds.

How Revenues from Energy Production on Federal Lands Are Allocated 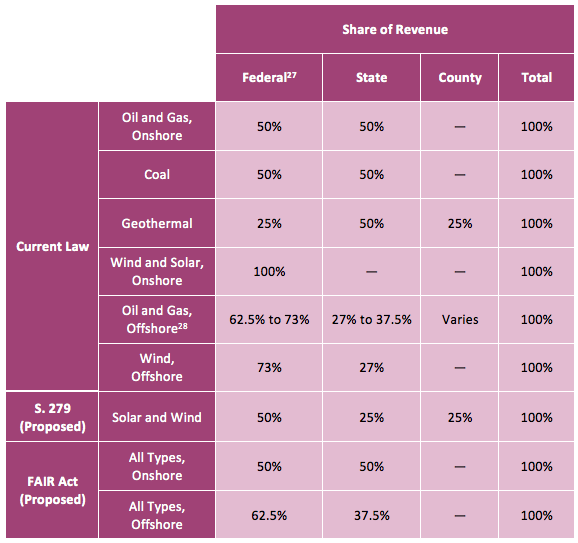 1 Adam Vann, U.S. Congressional Research Service, Energy Projects on Federal Lands: Leasing and Authorization, February 2012, http://www.fas.org/sgp/crs/misc/R40806.pdf.
2 Ibid.
3 Two percent of the states’ share (1 percent of the total) is retained by the Treasury to cover the administrative costs of the leasing program.
4 U.S. Government Accountability Office, Leasable Minerals on Federal and Indian Lands: Volume, Value, and Revenue, June 2012, http://www.gao.gov/assets/660/650122.pdf.
5 Vann, Energy Projects on Federal Lands, see note 1.
6 Ibid.
7 U.S. Department of the Interior, Bureau of Land Management, “Coal,” accessed August 2, 2013, http://www.blm.gov/wo/st/en/prog/energy/coal_and_non-energy.print.html. Under federal regulations, no bid less than the fair market value will be accepted, and the Department reserves the right to reject any and all bids regardless of the amount. Only after a high qualified bid is accepted will a lease be awarded. See 43 C.F.R. §§3422.3-2; 3422.4.
8 Ibid.
9 GAO, Leasable Minerals, see note 4.
10 Timothèe Nèron-Bancel, Geothermal Energy Association, Geothermal Revenue Under the Energy Policy Act of 2005: Income Distribution at Federal, State, and County Levels, December 2008, http://geo-energy.org/reports/Geothermal_Revenue_Under_the_Energy_Policy_Act_of_2005_Final.pdf.
11 GAO, Leasable Minerals, see note 4.
12 Nèron-Bancel, see note 10.
13 A final rule published by BLM on April 30, 2013 allows it to temporarily “segregate” lands in a solar or wind right-of-way application, closing those lands to mining claims for an initial period of two years. See U.S. Department of Interior, Bureau of Land Management, “Land Management Rule Will Facilitate Renewable Energy Development on Public Lands,” accessed August 9, 2013, http://www.blm.gov/wo/st/en/info/newsroom/2013/april/nr_04_29_2013.html.
14 As with BLM, the Forest Service does not have regulations that specifically address renewable energy development. Wind and solar projects would be classified as “special uses,” and as such, potential developers would need to apply for a special use permit. If granted, permit holders would also need to pay annual rental fees. According to a CRS report published in February 2012, the “Forest Service does not currently authorize any such projects on its lands.” See note 1: Vann, Energy Projects on Federal Lands.
15 U.S. Government Accountability Office, Renewable Energy: Agencies Have Taken Steps Aimed at Improving the Permitting Process for Development on Federal Lands, January 2013, http://www.gao.gov/assets/660/651362.pdf.
16 Bureau of Ocean Energy Management, “Federal Offshore Lands | BOEM,” accessed August 2, 2013, http://www.boem.gov/Oil-and-Gas-Energy-Program/Leasing/Outer-Continental-Shelf/Federal-Offshore-Lands/Index.aspx.
17 Bureau of Ocean Energy Management, “Outer Continental Shelf | BOEM,” accessed August 2, 2013, http://www.boem.gov/Oil-and-Gas-Energy-Program/Leasing/Outer-Continental-Shelf/Index.aspx.
18 Bureau of Ocean Energy Management, “Fair Market Value | BOEM,” accessed August 2, 2013, http://www.boem.gov/Oil-and-Gas-Energy-Program/Energy-Economics/Fair-Market-Value/econFMV.aspx.
19 Office of Natural Resources Revenue, “ONRR’s Frequently Asked Questions ? FAQs,” accessed August 2, 2013, http://statistics.onrr.gov/PDF/FAQs.pdf.
20 Bureau of Ocean Energy Management, “Gulf of Mexico Energy Security Act (GOMESA) | BOEM,” accessed August 2, 2013, http://www.boem.gov/Oil-and-Gas-Energy-Program/Energy-Economics/Revenue-Sharing/Index.aspx.
21 National Park Service, “State LWCF,” accessed August 2, 2013, http://www.nps.gov/lwcf/.
22 Adam Vann, U.S. Congressional Research Service, Wind Energy: Offshore Permitting, October 2012, http://www.fas.org/sgp/crs/misc/R40175.pdf.
23 As of August 9, 2013, these cosponsors are Senators Max Baucus (D-MT), Michael Bennet (D-CO), Martin Heinrich (D-NM), Dean Heller (R-NV), James Risch (R-ID), Mark Udall (D-CO), and Tom Udall (D-NM). See the Library of Congress at http://thomas.loc.gov/cgi-bin/bdquery/z?d113:S.279:@@@P. A companion bill ? H.R. 596, also receiving bipartisan support ? was introduced on February 8, 2013 by Representative Paul Gosar of Arizona.
24 Per language in the proposed bill, this fund would be established for the purposes of “(i) addressing and offsetting the impacts of wind or solar development on Federal land?; (ii) securing recreational access to Federal land through an easement, right-of-way, or fee title acquisition from willing sellers for the purpose of providing enhanced public access to existing Federal land that is inaccessible or significantly restricted; and (iii) carrying out activities authorized under the Land and Water Conservation Fund Act of 1965?” See the Library of Congress at http://thomas.loc.gov/cgi-bin/query/z?c113:S.279.IS:/.
25 As of August 9, 2013, these cosponsors are Senators Mark Begich (D-AK), Heidi Heitkamp (D-ND), and Mary Landrieu (D-LA). See the Library of Congress at http://thomas.loc.gov/cgi-bin/bdquery/z?d113:S.1273:@@@P.
26 Website of Senator Mary Landrieu (D-LA), “Senate Committee Holds Hearing on Landrieu FAIR Act | Mary Landrieu | U.S. Senator for Louisiana,” accessed August 5, 2013, http://www.landrieu.senate.gov/?p=press_release&id=3885.
27  Federal government revenues are directed to various end use activities. Specifically, revenues are directed to the Conservation Fund, the Reclamation Fund, the Land and Water Conservation Fund, as well as to the General Fund, and in some cases to a combination of these funds. In many cases, certain revenues are then disbursed back to states to fund land acquisition projects, maintenance and creation of recreation areas, and irrigation projects, among others. See the legal authorities mentioned in the text and the related federal regulations.
28 Offshore oil and gas revenue allocations vary depending on the location of the lease sale area, whether or not the lease is within 3 nautical miles of the seaward boundary of a coastal state, and the date that the lease was issued. See the legal authorities mentioned in the text and the related federal regulations.