Kevin McGrath contributed to this post. Last week was “Fiscal Year (FY) 2013 budget week” in the House of Representatives. House Budget Committee Chairman Paul Ryan released his blueprint for federal fiscal policy, and then House Democrats and other caucuses in the House followed suit, including the Congressional Progressive Caucus (CPC) and a proposal co-authored by Reps. Jim Cooper (D-TN) and Steve LaTourette (R-OH). In recent days, we have analyzed each of these plans on this blog. For links to these pieces, see below:

Next up in our House budget series is the proposal from the Republican Study Committee (RSC). Most of the Information about the budget proposal is drawn from Cut, Cap, and Balance: A Fiscal Year 2013 Budget, though some elements are pulled directly from the House Republican budget, summarized here.

The RSC budget represents the ideas of a conservative Republican coalition in the House. It proposes to achieve the entirety of its deficit reduction through aggressive spending cuts that go, in some areas, far beyond even what Chairman Ryan has proposed. These cuts would be enough to bring the budget into balance in 2017 if revenues were held to their historical average, but due to details described below, the RSC tax reform would be scored as raising less revenue than claimed.

The RSC proposes a drastically reduced role in society for the federal government. Medicaid and the Children’s Health Insurance Program (CHIP) are cut to less than half of their projected size in 2022. The coverage provisions in the Affordable Care Act (ACA) are eliminated, welfare programs are contracted, and annually appropriated (discretionary) domestic spending faces unprecedented cuts. Without new revenues, stabilizing the long-term debt is an impossible task unless major government programs are severely curtailed or abolished.

What follows is an objective analysis of the RSC’s budget. As with our other budget analyses, this post will focus heavily on the 10-year budget window. While understanding the long-term budget implications of major policies is integral to solving our debt problems, significant uncertainty in projections and the lack of specific policies make scoring beyond the first decade extremely difficult for most of these budgets.

The RSC plan restrains debt to 53 percent of the economy ? or gross domestic product (GDP) ? in 2022, a level well below that achieved by the budgets of Chairman Ryan, House Democrats, or President Obama. The RSC accomplishes this by holding revenue at levels consistent with current policy, and then cutting nearly $8 trillion from spending over the decade (including interest). The charts below illustrate the revenue and spending levels achieved in 2022 by each major budget plan, and what each would do to the debt over the next 10 years: 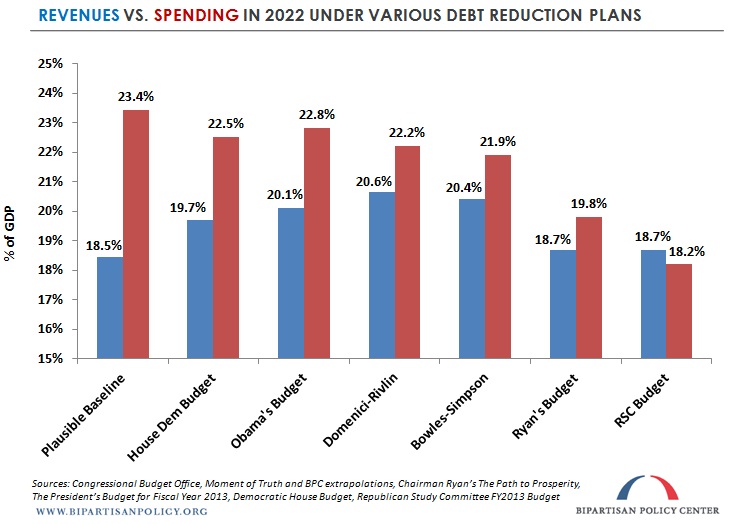 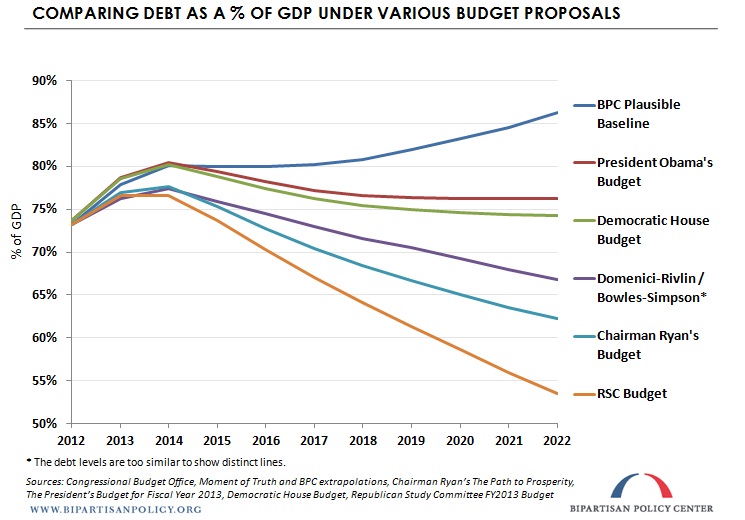 The RSC budget would require an increase in the debt ceiling of roughly $3 trillion by 2022 ? substantial, but significantly less than all of the other FY 2013 budget submissions.

This budget would repeal the Affordable Care Act’s (ACAs) expansion of Medicaid and CHIP that is scheduled to extend coverage to most nonelderly people (and their children) with incomes below 138 percent of the federal poverty level. Additionally, instead of the current shared-financing system between the states and federal government, the federal share of Medicaid and CHIP would be allocated to the states through block grants.

Starting in 2023, the RSC budget transitions Medicare to a premium support system based on competitive bidding, as described in the Ryan budget. In brief, premium support would provide seniors with a choice between traditional Medicare and private plans on a Medicare Exchange. Plans would compete to provide benefits to seniors at the lowest cost. The government would contribute a fixed amount for each beneficiary to purchase a plan, and the value of the support would be set at the cost of the second-lowest-bidding plan in each region. Annual per capita cost growth in the Medicare program would be capped at GDP plus 0.5 percentage points. Also beginning in 2023, the RSC plan increases the eligibility age for Medicare by two months per year until it reaches 67 in 2034. The RSC budget does not propose to prevent the 27-percent cut to physicians’ payments under Medicare that is scheduled to be imposed in calendar year 2013. This automatic cut resulting from the sustainable growth rate (SGR) mechanism installed in the 1990s has been avoided in recent years by providing offsetting deficit reduction ? referred to as the “doc fix.” The budget does not include such a “doc fix,” and thus would allow this cut to occur.

Among other elements, the RSC budget would repeal:

It is important to note that their proposal maintains the various cuts to Medicare enacted in the ACA. CBO projects these reductions to save more than $500 billion over the coming decade, and to continue restraining Medicare cost growth in later years.

Starting in 2023, the RSC budget proposes to increase the Social Security full retirement age by two months every year until it reaches age 70 in the year 2047. Both of the bipartisan commissions (the Bipartisan Policy Center’s Domenici-Rivlin Task Force and the Bowles-Simpson Fiscal Commission) recommended adjustments to the Social Security program to account for increased life expectancies, but the pace of the increase proposed by the RSC would significantly outpace that of those groups.

The budget proposes to keep revenues at roughly their historical average ? 18.5 percent of GDP ? for the next decade, but the method by which that revenue would be raised is unclear. Following the outline of the Jobs through Growth Act, the budget would cut marginal individual income tax rates and reduce the number of tax brackets, creating a system with two brackets of 15 percent and 25 percent. Other than a standard deduction and a deduction for dependants, there would be no credits or deductions in the code. Taxpayers could choose to file under this new system or under the current code. In either case, the Alternative Minimum Tax (AMT) would be eliminated and investment income would be taxed at 15 percent (with gains indexed for inflation). The estate tax also would be abolished. Since all of these provisions would lose significant revenue, it is unclear where the offsetting increases (which would need to be sizeable in order to maintain revenue-neutrality) would come from. Under the RSC plan, the corporate tax rate would be reduced to 25 percent, as well. The RSC also would implement a one-year repatriation holiday, during which foreign-earned profits that are returned to the U.S. would face a 5.25 percent tax rate. The budget also encourages the tax-policy committees to move to a territorial system of corporate taxation. These tax cuts allegedly would be paid for by eliminating most of the deductions and credits in the current system, but the details remain unspecified. Moreover, by making the alternative system optional and cutting taxes in the current system, the RSC tax reform plan would be scored by CBO as raising less revenue than the budget claims ? though the exact amount is unclear without more details.

The RSC budget proposes to fund annually appropriated (discretionary) defense spending at the same levels as the Ryan budget ? namely, waiving the defense sequester and Budget Control Act cuts and having defense spending grow in every year. In lieu of the defense cuts scheduled under current law, the budget cuts non-defense discretionary (NDD) spending far below the levels implied by the sequester. Specifically, the current projection of budget authority for NDD (including the sequester) is $586 billion in 2022 ? the RSC budget would reduce that figure to $329 billion, translating to a cut of more than 40 percent. This goes substantially beyond what any other recent budget (including Chairman Ryan’s) has proposed, and would require unprecedented cuts to most government agencies. Finally, all expenditures for the Overseas Contingency Operations fund, which pays for conflicts overseas, would be zeroed out by 2017, more quickly than either President Obama’s or Chairman Ryan’s budgets. (The CPC budget and the House Democrats budget eliminated all such funding by 2015.)

The RSC budget offers numerous proposals for other mandatory spending, including:

In addition to all of these cuts and reforms, the RSC budget would require authorizing committees to identify an additional $270 billion over 10 years in “wasteful, unnecessary, or lower priority [mandatory] spending.” Locating this amount certainly would be a challenging task, since roughly $2 trillion in specific proposed reductions to these programs are already being called for by this budget.

The RSC also recommends numerous other spending cuts and reforms, including some to the budget process. A small sample are listed below: