One of the newly released consensus recommendations of the Bipartisan Policy Center’s Disability Insurance (DI) Working Group tries to address what many consider to be a problematic work disincentive in the program: the so-called “cash cliff” that results in some beneficiaries losing their entire cash benefit if earned income exceeds a fixed ceiling by even one dollar.

The package of recommendations overall seeks to address the impending exhaustion of the DI Trust Fund and to improve the Social Security Disability Insurance (SSDI) program to better meet the needs of Americans with disabilities.

The recommendation to replace the “cash cliff” would be aimed at beneficiaries who are eligible for both SSDI and Supplemental Security Income (SSI), who are sometimes referred to as dually-eligible beneficiaries or concurrent recipients.1 The “cash cliff” refers to the substantial gainful activity (SGA) threshold, which is $1,090 per month in 2015. When earnings exceed this amount by even one dollar, the entire SSDI cash benefit may be suspended and beneficiaries can be terminated from the program. Many consider this program feature to be a problematic work disincentive.

There was widespread interest among the working group in establishing a benefit offset for all SSDI beneficiaries beginning at a threshold in the range of $700 to $800, along with guaranteeing continued program attachment except in the case of medical improvement. However, preliminary estimates suggest that this proposal would increase program costs significantly. A lower-cost benefit offset package for all beneficiaries would require the offset to begin at a threshold so low that the income security of current beneficiaries would be threatened. Therefore, the working group recommends starting with a smaller proposal focused on beneficiaries dually-eligible for SSDI and SSI.

The SSDI and SSI programs have very different work incentives, which can be confusing and burdensome for dually-eligible beneficiaries, who number about 1.5 million in 2015. SSDI beneficiaries who have exhausted the TWP face a “cash cliff,” as earnings do not affect cash benefits until earnings exceed the SGA level, at which point cash benefits are either temporarily suspended or the beneficiary is terminated from the program (if the EPE has been exhausted).

The SSI program uses a different approach. In 2015, the maximum SSI cash benefits are $733 per month for an individual and $1,100 per month for a couple. After a $20 exclusion, SSI benefits are reduced dollar-for-dollar by unearned income, which includes Social Security cash benefits. After a $65 exclusion, SSI benefits are reduced by one dollar for every two additional dollars of earned income. This gradual benefit offset in SSI ensures that as beneficiaries earn more, their total income (earnings plus SSI benefits) will always increase.

To illustrate the impact of the current-law work incentives of SSDI and SSI, suppose that Jane worked in a covered job with relatively low earnings, became disabled, and qualified for SSDI with a monthly cash benefit of $600. Initially, she had no earnings and virtually no assets, so she also qualified for a monthly cash SSI benefit of $153. If, at some point, Jane successfully reenters the workforce, her SSI benefit will be gradually reduced once her earnings exceed $65, at which point the SSI cash benefit will drop by one dollar for every two additional dollars earned. At $371 of earnings, the SSI benefit would phase out completely; her SSDI benefit would remain unchanged. Once Jane exhausts her nine-month TWP, if she earns more than $1,090 in any given month, she would lose all cash SSDI benefits. For example, if she were to exhaust her TWP and then earn $1,091 in a single month, she would lose the entirety of her SSDI cash benefit, and her total income would suddenly drop from $1,690 (at $1,090 of earnings) to $1,316.4 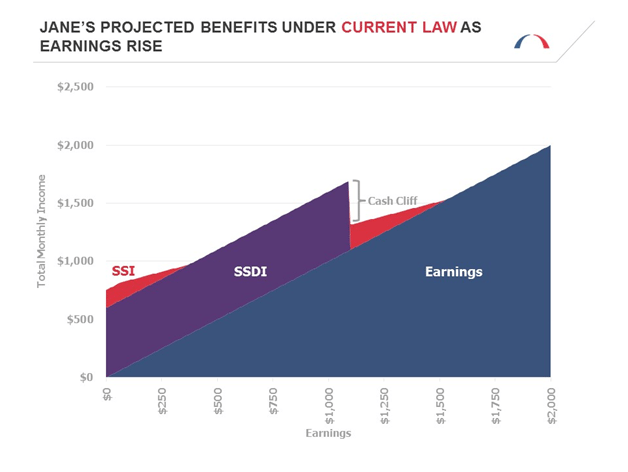 BPC’s DI Working Group proposes to make several changes to how earnings affect the SSDI benefit for dually-eligible beneficiaries.5 For the purposes of the SSDI benefit, earnings would be disregarded up to the greater of: (1) a threshold of $700 per month in 2015, indexed to wages going forward; or (2) whatever level an individual’s SSI benefit phases out completely. For every two additional dollars in earnings above this threshold, SSDI benefits would be reduced by one dollar.

The SSDI benefit offset would not affect the calculation of SSI benefits. The TWP and EPE would be eliminated for dually-eligible beneficiaries, who would instead be guaranteed continued attachment to the SSDI program except in the case of medical improvement. Beneficiaries who earn enough to offset all SSDI benefits would have their cash benefits suspended; if monthly earnings dropped below that threshold, cash benefits would be automatically reinstated.6

Under this proposal, Jane’s SSI cash benefit would continue to be offset by earnings as under current law. Her SSDI cash benefit, however, would begin phasing out gradually after earnings exceed $700 instead of dropping precipitously once earnings exceed $1,090. As demonstrated by the chart below, which displays Jane’s total income as earnings increase, the proposal would smooth out the “cash cliff,” offering more consistent work incentives as Jane’s earnings increase. 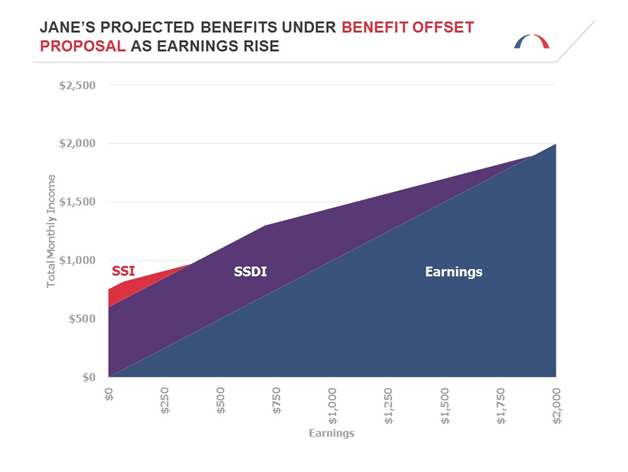 Replacing this cash cliff would remove a strong disincentive to work for dually-eligible SSDI beneficiaries who otherwise might be inclined to increase work effort. This approach, coupled with ?other reforms proposed? by BPC’s working group, would help to improve the SSDI program for those it is intended to serve now and into the future.

1 SSI is a safety-net program that provides cash benefits and, in most cases, access to Medicaid for many low-income, low-asset people with disabilities, regardless of work history.
2 These nine months do not necessarily have to be consecutive.
3 An expedited reinstatement process and extended Medicare coverage are available for a limited time to beneficiaries who leave the program due to work.
4 The difference between this figure and Jane’s earned income ($1,091/mo) is the part of her SSI benefit that would be restored when the SSDI benefit is no longer factored in. Notwithstanding, this is a significant cliff.
5 In addition to implementing a replacement of the cash cliff for dually-eligible beneficiaries, the working group recommends a voluntary pilot to test a benefit offset beginning at thresholds below the SGA level ($1,090 per month for non-blind beneficiaries in 2015) for SSDI beneficiaries who qualify for the program before the age of 50 and are not dually-eligible.
6 Additional technical specifications for the proposed benefit offset are included in the full report of the working group.

Social Security at 80: Celebrating the Past and Securing the Future