This summer, upheavals and reversals in U.S. refugee policy have caused a measure of uncertainty in just how many refugees will be allowed entry into the United States. In May, the State Department lifted the limit on the number of refugees allowed entry.[1] Refugee groups were told in an email by a State Department official that they would be able to bring in refugees “unconstrained by the weekly quotas that were in place,” while the Trump administration had proposed to suspend all refugee entries and to later reduce the annual limit on refugee admissions from 110,000 to 50,000. On June 12, the Ninth Circuit Court of Appeals joined the Fourth Circuit in ruling against the president’s “revised” travel ban,[2] which included the 120-day suspension of refugee admissions. On June 26, the Supreme Court agreed to hear the administration’s appeal of these decisions, but allowed the ban to go into effect for immigrants[3] with no “bona fide relationship with a U.S. person or entity,” which, depending on how the government interprets the ruling, could include many refugees.

46,403 refugees have been admitted to the United States since the fiscal year started in October, 2016.

Through May 2017, 46,403 refugees have been admitted[4] to the United States since this fiscal year started on October 1, 2016. This is the highest total during the same period of the fiscal year since 2010, when 47,977 refugees had been admitted. An effort by the Obama administration[5] in its last months to increase the number of refugee admissions in FY2017 is largely responsible for the higher number, since monthly admissions dropped significantly following President Donald Trump’s inauguration in January.

Prior to the start of the Trump administration, refugee flows were on average higher than what was seen in past years. Yet, after peaking in August 2016, admissions declined each month since then, to a low point in March 2017 during which just over 2,000 refugees were admitted. This is the lowest monthly number seen since October 2013. Since March, however, after the president’s executive order on refugees was stopped by the court, there has been a slight uptick in admissions, to nearly 4,000 in May. 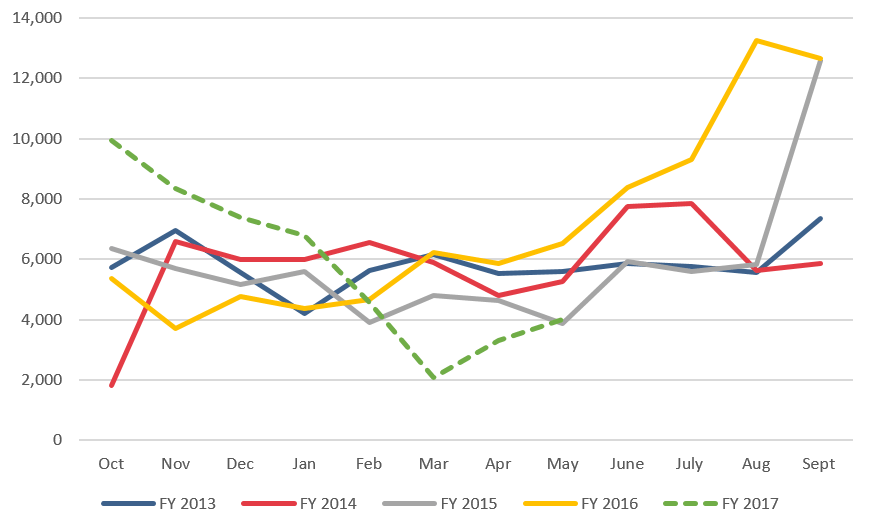 In spite of the State Department decision last month to increase admissions, the impact of the latest Supreme Court decision may make future admissions totals more uncertain. Prior to the SCOTUS ruling, refugee advocacy organizations had estimated an increase in admissions from around 830 per week to over 1,500 per week, which could have allowed over 70,000 refugees to enter the United States by the end of the fiscal year.

While the court did not specify a particular number of refugee admissions in its order, it allowed the administration to bar admission from those who do not have a bona fide relationship with a U.S. person or entity. Refugee advocates argue that the refugee resettlement agencies funded by the government do have such a relationship. But that has yet to be determined by the government. The court order states “An American individual or entity that has a bona fide relationship with a particular person seeking to enter the country as a refugee can legitimately claim concrete hardship if that person is excluded? But when it comes to refugees who lack any such connection to the United States? the balance tips in favor of the Government’s compelling need to provide for the Nation’s security.”[6] Once the administration issues its guidance there may be further litigation on this point, a prospect some of the Supreme Court justices mentioned in a partial dissenting opinion.

Pew Research Center reported that in FY2016 a roughly even number of Muslim and Christian refugees were admitted representing 46 and 44 percent of total admissions, respectively. The share of refugees that are Muslim has increased in recent years because of ongoing conflict in Iraq, Syria, and Somalia. These three countries, along with the Democratic Republic of the Congo which has suffered decades of civil war, account for over half of all refugee admissions.

Table 2. Refugee Admissions FY2017 (through May)