The District of Columbia government has completed 24 real estate projects since 2015 and currently has 17 projects under construction. Two such projects?a development in the West End and the Entertainment and Sports Arena on the former Saint Elizabeths Hospital campus?demonstrate how the District has leveraged private capital and expertise to redevelop city-owned properties. While both projects have had tangible public benefits, each faced challenges and critics, underscoring the importance of community engagement when delivering projects with private partners. A look into each project reveals how the District innovatively contracted with private partners to redevelop underutilized city properties and prioritize economic and community development.

In September 2015, D.C. Mayor Muriel Bowser announced plans to build an arena to help revitalize Congress Heights and surrounding neighborhoods in the city’s predominately low-income Ward 8. The arena, which is part of the first phase of a broader city effort to redevelop the District’s 118-acre St. Elizabeths East Campus, will be the new practice facility for the Washington Wizards and home of the Washington Mystics. In addition to the two basketball teams, the final plans for the arena show that the 118,000-square-foot, 4,200-seat facility will accommodate concerts, a variety of sporting events, and training space. Retail space will line the exterior of the arena.

To develop the site, the District signed a 19-year lease for zones 9 and 12 of the St. Elizabeths East campus with Events DC, the District’s convention and sports authority. The city will retain ownership. However, Events DC will be responsible for the design, construction, and management of the site. In 2015, Events DC hired Smoot Construction and Gilbane Building Company to construct the arena.

Originally, the project’s price tag was $55 million?with $27 million coming from Events DC, $23 million from the District, and $5 million from Monumental Sports and Entertainment (the company that owns the Wizards and Mystics). But in July 2016, Events DC bumped that figure up to $65 million to account for a change in the arena’s design, costing an additional $7.5 million, and a $2.5 million contingency fund to cover expenses such as historic preservation and variable construction costs. Since Events DC foot the extra $10 million (which did not receive approval from the D.C. City Council), construction began in 2016. The arena is scheduled to open on September 22.


Soon after the project’s groundbreaking ceremony, the D.C. Mayor’s Office, Events DC, and Monumental Sports and Entertainment engaged several community groups in Congress Heights during at least six meetings. Over the past three years these have included 18 businesses and more than two dozen local nonprofits and faith-based groups, for a total of over 3,000 individuals. Together, the community and District penned a community benefits agreement that outlined a $10 million investment over the next 19 years to support Congress Heights and the arena’s surrounding neighborhoods. Other community benefits include: paid summer youth programs, apprenticeship opportunities for Ward 7 and 8 residents, local hiring preferences, and job-shadowing opportunities for young adults interested in careers in sports, entertainment, and construction.

In addition to these negotiated community benefits, the sports arena is expected to have a significant economic impact. Specifically, the District estimates that the arena will generate hundreds of construction jobs, attract 350,000 annual visitors, bring in $400,000 per year in rent from Monumental, attract additional private development in the neighborhood, and result in $4.5 million annually in tax revenue for the city. 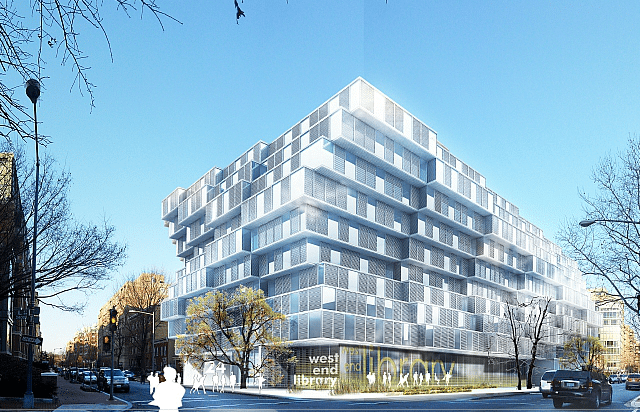 Plans to redevelop two city-owned parcels?replacement of the West End Library, located at the corner of 23rd and L Streets NW, and an outdated fire station, located at 23rd and M Streets NW?were first discussed in 2000. A proposal was ultimately put forth in 2007. Without the necessary public funds to finance the projects, the city sought a private partner. Ultimately, the District agreed to cede ownership of the properties to private developers in exchange for the construction of mixed-use developments at the sites, including a new public library and fire station. During the contract negotiation, the developers argued that the library parcel should be exempt from the District’s requirement to keep a certain number of housing units “affordable” to low-income households. Since developers planned to include rental units on each parcel, they would normally be subject to the city’s inclusionary zoning policy. The District agreed to waive the requirement; the Zoning Commission reasoned that the new library and fire station represented a sufficient public benefit to offset the need for the affordable housing requirement.

Final plans for the library parcel included a newly renovated West End Library, a coffee shop, retail space, 71 market-rate condos, and 93 rental units. Although the library parcel was exempt from the requirement to include affordable housing units, final plans for the fire station parcel included 61 housing units, 52 of which were affordable for households at or below 60 percent of area median income in addition to three units of permanent supportive housing affordable for households at or below 30 percent of area median income. The District invested significant funds in the fire station land parcel, including $4.3 million from the city’s Housing Production Trust Fund, more than $13 million of short- and long-term bonds, and $7 million from the Office of the Deputy Mayor for Planning and Economic Development. Developers covered the cost of constructing the multi-story structures, including the library and fire station, with the District estimating the project would add an extra $3.5 million in annual tax revenue to the city. Construction of the fire station parcel?called Square 50?was completed in May 2017; Square 37, the library project, was completed later that year in December.


From start to finish, development of the West End spanned more than a decade due to competing visions for the site between the District and community groups. Specifically, controversy surrounding the West End centered on the affordable housing exemption. A community activist group called the Library Renaissance Project sued the District in 2012 following the Zoning Commission’s waiver of the city’s inclusionary zoning policy for Square 37. The group believed that the District should have denied the exemption because even with the affordable units, developers would still be positioned to earn sizeable profits from the properties. Others in the community felt that in exchange for the exemption, the District should have negotiated for more affordable housing units on the fire station parcel. Regardless, the District ultimately denied the group’s request for further review, and groundbreaking on Square 50 took place in December 2014.

Although this project took considerable time to complete, covered four mayoral administrations, and had its fair share of controversy, the community received a renovated library and fire station that may not have been possible without partnering with the private sector. Moreover, the project developer, EastBanc, claims to have made notable efforts to engage the surrounding community in the planning and design of the site’s development. Particularly, from 2007 to 2016, EastBanc states that it held 210 meetings and presentations with several community groups including the West End Community Association, West End Library Friends, the Foggy Bottom Association, and more.

Redevelopment Partnerships
in
the District and Beyond


These projects are just two examples of how Washington, D.C., is utilizing the capital and expertise of private partners to redevelop city properties. While the West End development wasn’t without controversy, the project resulted in tangible public benefits in the form of a modernized public library and modernized fire station. The sports arena has also already started to generate the benefits outlined in its community benefit agreement. Both projects required community engagement, which demonstrates the importance of involving the public in the P3 process. As BPC has previously discussed, routine communication with community stakeholders is crucial to encouraging transparency, holding private partners accountable, and protecting the public interest. These lessons are important for communities across the country and ensuring that public-private partnerships result in benefits for all stakeholders involved.

Putting P3s to Work in the United States