Defense Secretary Ash Carter sent a lengthy letter to the House and Senate Armed Services committees detailing his objections to their versions of the 2017 National Defense Authorization Act. His top concern is the House’s attempt to redirect $18 billion in Oversees Contingency Operation (OCO) funds to cover Department of Defense (DoD) base budget requirements and implicitly increase the overall defense budget. Why would Pentagon leaders object to additional funding? The answer has to do with the inherent volatility of OCO and the difficulties it presents for defense planners. The nature of the OCO budget means it fluctuates wildly every year, making it exceedingly difficult to efficiently use those dollars for long-term military requirements.

Starting in 2001, the OCO fund (formerly known as the Global War on Terror fund) helped the Defense Department recoup costs it incurred resulting from the conflicts in Afghanistan and Iraq. In 2008, OCO reached a peak of $186.9 billion in total obligation authority. This amounted to over 28 percent of the overall DoD budget that year. 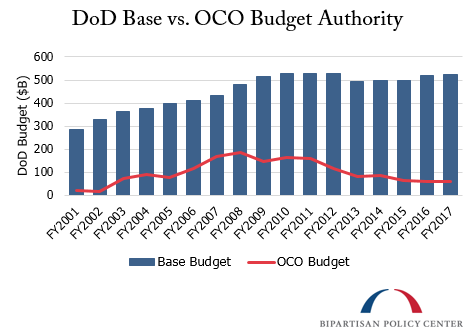 From 2001 to 2008, DoD tried to maintain a separation between the base and OCO budgets. Base budget requests cover normal DoD operating costs and are submitted to Congress, along with the rest of the president’s budget, in early February. The OCO request was typically submitted separately as a supplemental funding request. This practice changed during the Obama administration. Starting with President Obama’s first budget for fiscal year 2010, both the base and OCO requests were released simultaneously. This allowed lawmakers to compare the two budgets side-by-side and removed some of the barriers separating the base from the OCO budget request.

Even as the DoD budget began to shrink, the Obama administration continued to keep base budget requirements separate from war-related, OCO requirements. In 2010, the Office of Management and Budget issued a policy letter to DoD with criteria to help determine “whether funding properly belongs in the base budget or in the budget for OCO.” The 2011 DoD budget request explicitly stated that the Pentagon was trying to “restrict OCO requests to genuine war costs.” This all began to change with the implementation of Budget Control Act (BCA) budget caps in 2013.

While defense and non-defense discretionary funds are capped by the BCA, OCO funds are exempt. As the caps began impacting the DoD base budget, OCO sometimes became a safety valve for both the Congress and Pentagon leaders. Indeed, the Marine Corps and the Army began migrating a portion of their military personnel costs to OCO starting in fiscal year 2013. The Bipartisan Budget Act (BBA) of 2015 openly transferred $7.7 billion of base budget requirements into the 2016 OCO budget. This funded items like the Ukraine Security Assistance Initiative, and procured dozens of items that are unrelated to ongoing conflicts.

The Trouble with OCO

Although recently Congress and the administration have taken a more relaxed approach to the allocation of OCO funds due to BCA caps, senior defense leaders have objected to using OCO to further cover enduring base budget defense requirements. Defense Secretary Carter recently stated that the House plan to redirect OCO dollars for the base budget could unravel the BBA of 2015 “which provided critical stability that DoD needs now and desires for the future?that undercuts stable planning and efficient use of taxpayer dollars.”

Defense Department leaders have long been asking for more money than the BCA caps allow, so it may come as a surprise that Secretary Carter has come out so strongly against additional OCO funds. His primary rationale is based on the inherent unpredictability of the OCO budget compared to the base DoD budget as detailed below. 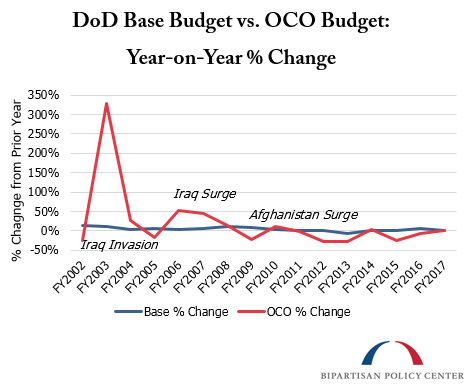 While the DoD base budget has been relatively stable over the last 15 years, the OCO budget fluctuates wildly. This wreaks havoc on DoD planners who must think about items like troop end-strength and major acquisition programs in multi-year increments. The DoD base budget request is accompanied by a five-year projection called the Future Years’ Defense Plan (FYDP) to inform lawmakers of the department’s long-term budget strategy. The OCO budget request contains no such plan because it is intended to cover war-related costs that should, theoretically, change every year.

In the long-term, defense and military leaders continue to advocate for future funding in excess of the BCA caps. The 2017 FYDP projects the base budget will exceed current BCA caps by over $100 billion from fiscal year 2018 to 2021. However, for fiscal year 2017 at least, it appears as though the Pentagon is satisfied with the funding levels provided by the 2015 BBA, and wants to stave off any attempt to add additional funds through the OCO process.