We hope that this comprehensive summary will further clarify the entirety of his plan, and compare it in some key respects to that of President Barack Obama and the plans proposed by the bipartisan fiscal commissions (BPC’s Domenici-Rivlin and Bowles-Simpson).


For a number of reasons, this analysis focuses heavily on the ten-year budget window. Although it is critical to understand the long-term effects of major policies included in any debt reduction plan, significant uncertainty in projections and lack of specificity in policies make concrete scoring beyond the first decade impossible for many of these packages.

Under Ryan’s budget, the ratio of debt to our economy, or gross domestic product (GDP), would decline to 62 percent by 2022. Notably, this is lower than the debt levels achieved by either the Domenici-Rivlin or Bowles-Simpson commissions (both of which reduce the debt to 67 percent of GDP by 2022), and significantly lower than that under the president’s budget proposal for FY 2013 (76 percent) or the BPC Plausible Baseline* (86 percent).

The chart below illustrates the revenue and spending levels achieved in 2022 by each major budget plan. 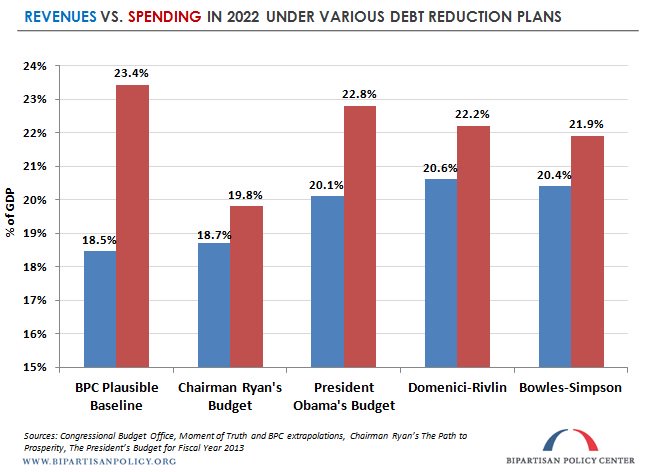 Ryan’s budget would necessitate an increase of the debt ceiling by roughly $5.5 trillion through 2022. Due to the comparatively lower overall level of debt cited above, the increase is approximately $3 trillion less than that required by the president’s budget over the same horizon.

This budget would repeal the Affordable Care Act’s (ACAs) expansion of Medicaid and CHIP that is scheduled to extend coverage to most nonelderly people (and their children) with incomes below 138 percent of the federal poverty level.

Additionally, instead of the current shared-financing system between the states and federal government, the federal share of Medicaid would be allocated to the states through block grants.

Under Ryan’s budget, the Medicare program would remain the same as under current law for everyone enrolled before 2023. Two changes would be made for those who become eligible in 2023 or later:

1) Beginning in 2023, the chairman’s plan increases the eligibility age for Medicare by two months per year until it reaches 67 in 2034.

2) Ryan’s budget introduces a competitive bidding system, backstopped by a cap on per beneficiary growth of 0.5 percentage points faster than the economy (GDP+0.5%). This reform is very similar to the proposal that he advanced in December 2011 with Senator Ron Wyden (D-OR), except that the annual growth cap is now set at GDP+0.5% instead of GDP+1%.

Seniors would be able to choose between traditional fee-for-service Medicare (FFS) and various private healthcare plans on a newly established, regulated Medicare Exchange, similar in structure to those created by the ACA. In each region, healthcare plans would be paid based on the cost of the second-least expensive approved private plan or FFS, whichever is less costly, risk-adjusted for the health status of their enrollees. The cost of this plan would establish the “benchmark” government payment in each locality. Therefore, the amount that the government contributes would be tied to the cost of health care in a given area.

Beneficiaries who choose to enroll in a plan that is more expensive than the benchmark ? even if that plan is FFS ? would be required to pay the incremental additional cost. A beneficiary who enrolls in the least-expensive approved plan would be rebated the full difference in cost from the benchmark.

Additionally, if costs per enrollee continued to grow faster than the cap of GDP+0.5%, seniors would have to pay an additional premium to make up the difference. For reference, CBO projects Medicare to grow at GDP+0.8% per beneficiary from 2023-2032 and GDP+1.7% thereafter under current law, which assumes that the cuts from the ACA remain in place and are effective.

Ryan’s budget does not propose to prevent the 27-percent cut to physicians’ payments under Medicare that is scheduled to be imposed in calendar year 2013. This automatic cut resulting from the sustainable growth rate (SGR) mechanism installed in the 1990s has been avoided in recent years by providing offsetting deficit reduction ? referred to as the “doc fix.” The chairman’s budget does not include such a “doc fix,” and thus would allow these cuts to occur.

Among other elements, Ryan’s budget would repeal:

It is important to note that his proposal maintains the various cuts to Medicare enacted in the ACA. CBO projects these reductions to save more than $500 billion over the coming decade, and to continue restraining Medicare cost growth in later years. 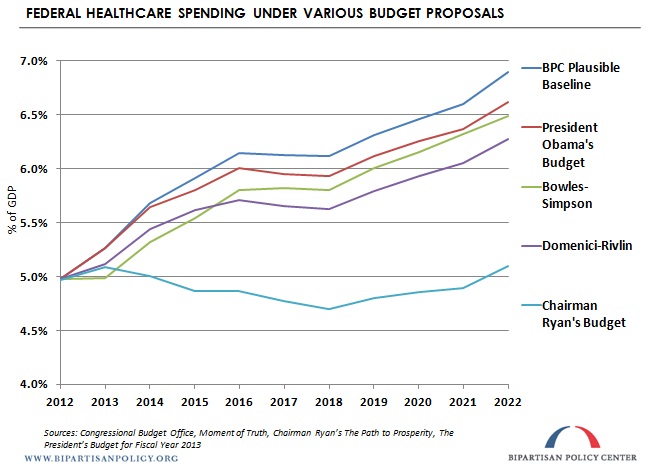 Ryan does not make specific proposals for Social Security, but calls for a bipartisan process, whereby both the president and congressional leaders would have to submit plans to restore the program to balance.

While he does not include a detailed proposal, Ryan indicates that he wants to achieve revenue-neutral tax reform from a current policy baseline – i.e., if all of the 2001, 2003, and 2010 tax cuts are extended and the Alternative Minimum Tax (AMT) is indexed to inflation. His proposal repeals the AMT, condenses the rate structure of the individual income tax to just two rates of 10 and 25 percent, and lowers the top corporate tax rate to 25 percent. His reform proposes to offset the revenue loss from these elements and the repeal of tax provisions in the ACA (altogether estimated by the Tax Policy Center to be $4.6 trillion over 10 years) by broadening the base through the elimination or reform of exemptions, deductions, and credits in the income tax code. In order to remain revenue-neutral, nearly every tax expenditure would have to be eliminated.

The Chairman’s budget also would switch to a “territorial” system for corporate taxation.

The treatment of discretionary spending is a bit difficult to follow, but below is our attempt at an explanation: 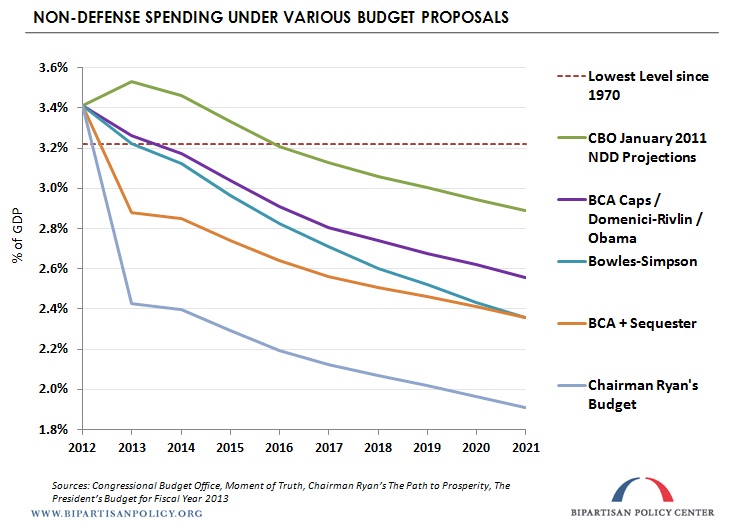 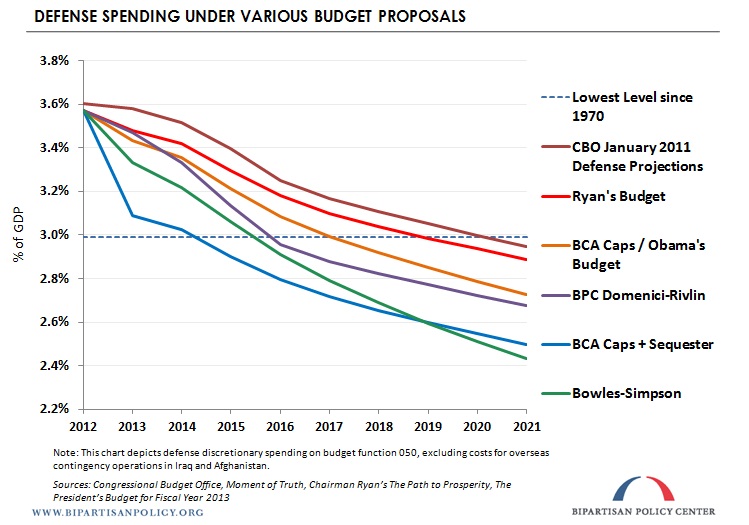 The plan also proposes a number of accounting and process changes to realize gains and minimize losses in certain areas of the federal budget: