When looking at the problem of skyrocketing federal student debt that has swelled to around $1.3 trillion, the focus almost always centers on student borrowers who shoulder the debt. Often overlooked in that conversation are parents who also borrow from the federal government on behalf of their children through a program called Parent PLUS. These loans represent around 6 percent of the federal student loan portfolio, totaling $78 billion.

The total number of Parent PLUS borrowers in default nearly tripled between 2005 and 2015.

Today, the Parent PLUS program consists of 3.5 million parent borrowers. These uncapped loans allow parents to borrow to cover their child’s tuition, fees, room and board, and approved expenses such as books, supplies, and transportation. Sixty days after the loan is issued, the parent is expected to begin repayment on a standard, 10-year plan. While there are options for longer terms or to defer payment until the child has graduated, interest continues to accrue over this period. Struggling parent borrowers who are unable to repay their loans face serious long-term threats to their financial security. 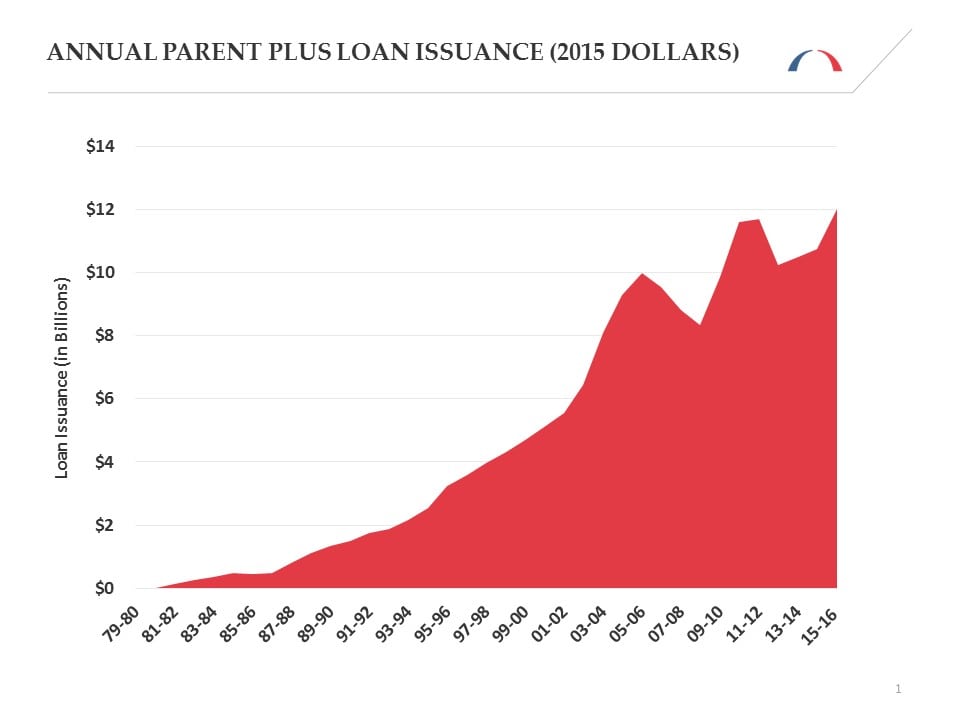 Parent PLUS borrowers are considered less risky than student borrowers, due in part to program eligibility requirements first implemented in 2011 that barred individuals with adverse credit histories from shouldering these loans. Although budget forecasts show that the federal government stands to profit considerably from the program, troubling repayment trends, with default rates steeply rising over the past decade, paint a more ominous picture.

As we mentioned in a previous blog, the Congressional Budget Office (CBO) uses two different methodologies to project the future costs (or savings) of the federal loan portfolio. The official method uses the rules laid out by the Federal Credit Reform Act of 1990 (FCRA), and finds that the federal loan portfolio as a whole will generate $73 billion in savings over the next 10 years. The alternative method, known as fair-value accounting, leads to a projection of $173 billion in federal costs.

The reason for this stark difference in results comes down to an assumption about market risk, the risk that macroeconomic shocks can lead to losses in even a well-diversified portfolio. Fair-value accounting takes market risk into account, and does so by using a higher discount rate. (The discount rate is a calculation used to quantify the present value of future cash flows.) FCRA, on the other hand, uses a lower discount rate (tied to U.S. Treasury bonds), to reflect the notion that the federal government can borrow more easily and with less risk than private firms. (For a more detailed overview of FCRA vs. fair-value accounting, refer to our previous blog.)

The important takeaway here is that the Parent PLUS program is the only portion of the loan portfolio that is projected to generate savings under both FCRA and fair-value accounting. According to BPC calculations based off of CBO’s projections, the program will bring forth $51.8 billion in federal revenues by 2027 under FCRA, and $24.6 billion under fair value accounting. Unfortunately, these rosy forecasts may not match reality on the ground.

Many parent borrowers are struggling

Parent borrowers tend to take on higher levels of debt than student borrowers. In the 2015-2016 academic year, Parent PLUS borrowers shouldered an average of around $15,000, compared to $7,000 for undergraduate direct loan borrowers.

Many parent borrowers also struggle to meet their monthly payments. The total number of Parent PLUS borrowers in default nearly tripled between 2005 and 2015, from 120,000 to 330,000 borrowers?now representing roughly one-tenth of all Parent PLUS borrowers. Of the Parent Plus borrowers entering repayment in 2010, 5.1 percent defaulted within three years.

Parent PLUS loans carry a higher interest rate than most federal loans issued to students.

When a borrower defaults on a Parent PLUS loan, the federal government has the power to garnish their tax refund, as well as any Social Security benefits. With nearly four-fifths of Parent PLUS borrowers either approaching or in retirement (ages 50 and up), declines in repayment could jeopardize the financial security of tens of thousands of parents. Indeed, the number of parent PLUS borrowers who were subject to such garnishment nearly quadrupled between 2005 and 2015, from around 11,000 to 41,000.

Parent borrowers also face other challenges not confronted by traditional student borrowers. Parent PLUS loans carry a higher interest rate than most federal loans issued to students, at 6.31 percent, compared to 3.76 percent for standard direct undergraduate loans. Parents also lack many of the protections and forgiveness features that are granted to student borrowers. For instance, parents are precluded from several of the income-driven repayment plans offered by the federal government. (These plans peg monthly payments to a borrower’s income levels, with loan forgiveness occurring after a specified number of years.)

Given skyrocketing tuition prices, Parent PLUS loans have become an important tool in allowing students access to the school of their choice. Non-repayment is a major problem, however, as default and delinquency are on the rise, creating risks for both struggling parent borrowers and the federal budget.

Policymakers should continue to work towards sustainable solutions to promote college affordability while lessening the need for risky borrowing.

Promoting Affordability and Accountability in the U.S. Higher Education System