This past Friday ? as the automatic, across-the-board spending cuts known as sequestration took effect ? the Office of Management and Budget (OMB), in charge of administering the sequester, issued its report to Congress. The 80-page document lays out the methodology ? mandated by the Budget Control Act of 2011 (BCA) ? that OMB used to calculate the percentage reductions to different categories of federal spending.

The resulting percentages are largely consistent with the projections released a couple weeks ago by the Bipartisan Policy Center (BPC).* We have updated the figures below: 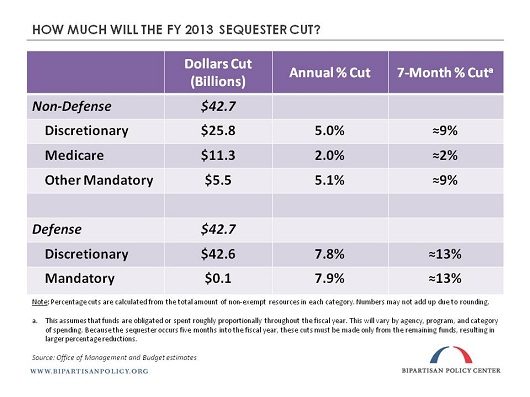 Crucially, these cuts will take place at the program, project, and activity (PPA) level, but as in OMB’s September publication, the agency’s latest report still does not specify exactly how those PPAs will be defined; instead, the reductions are presented at the budget account level. The PPA definitions will directly impact the degree of flexibility (or, in this case, inflexibility) provided to agencies as they administer the cuts. In the coming days, BPC will have more analysis of the PPA definitions, what they mean with regard to how the cuts are made, and what types of limited capacity agencies have to shift cuts among PPAs in order to alleviate some of the damaging impacts from these indiscriminate cuts.

* The discrepancy stemmed from the difficulty in estimating sequesterable Medicare resources across fiscal years, as the FY 2013 Medicare cut takes place from April 1, 2013 ? March 31, 2014.