The chart below sums up the reason that a continuing resolution for Fiscal Year 2014 (FY2014) seems certain.

As we have pointed out before, the House and Senate budget resolutions for FY2014 seemed to occupy different galaxies. The Senate assumed that current law (the Budget Control Act of 2011 or BCA) didn’t exist. The House assumed that the spending “caps” under the BCA were immutable.

Click on the image below to view a larger version 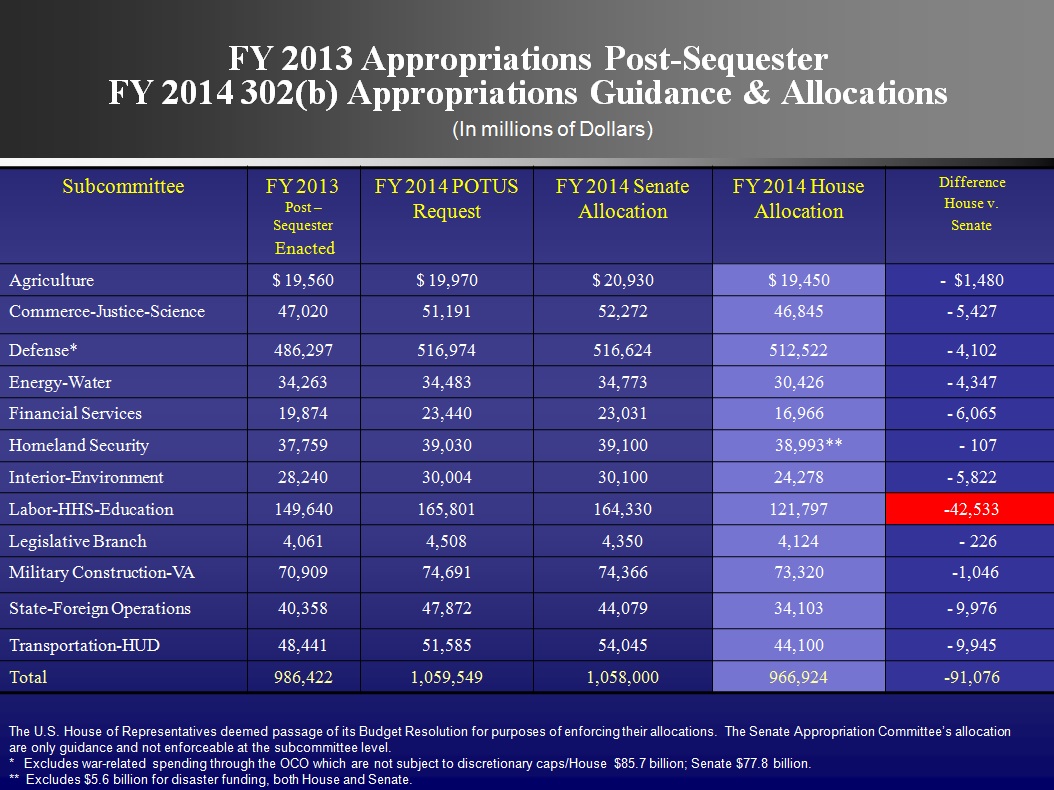 The difference is the now-famous $91 billion gap between the spending plans of the two bodies. When one considers the melodrama earlier this year over a mere $29 billion gap, it is not hard to imagine greater difficulty in bridging what has become a fiscal canyon between the two chambers.

Republicans have announced that they have finally realized that closing down the government entails political costs. So the GOP leadership wants an appropriations deal. But the GOP caucus wants the spending caps retained. After all, the only way that Republicans can claim that they have cut spending by $1.2 trillion (in return for voting for both tax increases and hikes in the federal debt ceiling) is by insisting that the BCA caps remain in place for another eight years.

Democrats assume in their budgets that the BCA caps will end in FY2014, presumably by some new legislation that repeals the 2011 law. In reality, the Democratic caucus has found itself endorsing cuts in education, research, health, infrastructure and other “investments in the future” in order to preserve entitlement programs that most analysts believe are unsustainable in their current form.

A glance at the chart shows not just the $91 billion gap between the two budgets, but some of the enormous differences in specific areas.

The fact that the FY2013 sequester has had little general impact complicates the politics. Many deficit hawks had hoped that this summer would bring disruption to the economy, leading both parties to modify the across-the-board cuts. That may still happen, but it seems more and more unlikely as time passes.

We know two things for sure.

First, Congress will pass an appropriations package for FY2014 of some size and duration.

Second, Congress will increase the federal debt ceiling, even if it is through some creative “gimmick.”

One scenario holds out hope for more than just stumbling along the fiscal path. Hints at a “not-so-grand bargain” revolve around three items?the expiration of the debt ceiling in late October or early November; the assumption that the House will pass a major tax reform bill (or at least a process leading to such a bill) in October or November; and, a short-term CR for FY2014 can be crafted to expire at the end of 2013.

Advocates of this scenario believe that House Republicans will produce a tax bill that cuts individual and corporate rates, among other things. They also believe that the prospect of a FY2014 sequester will make Democrats anxious to at least attempt entitlement changes of some size in order to spare education and health programs. Finally, the thinking goes, such entitlement changes might amount to more than $1 trillion during the next 10 years and, thus, Republicans would vote for a debt ceiling increase that would pry the issue out of the 2014 elections.

So, tax cuts, coupled with some entitlement changes, leads to some semblance of appropriations for FY2014 and an increase in the debt ceiling.

We hold out only a slim chance of this scenario becoming reality. Yet, it is hard to imagine any other outcome that doesn’t cause real harm to the economy and yield further disgust with Congress.

A Brief History of Tech and Elections: A 26-Year Journey