The budget agreement between Senator Patty Murray (D-WA) and Representative Paul Ryan (R-WI) that was announced earlier this week and passed the House of Representatives with a strong bipartisan vote (332-94) last night is a step forward for the budget process. Reaching agreement on a plan ? officially titled the Bipartisan Budget Act of 2013 ? that does away with a portion of the destructive sequester is a win for bipartisanship in a town that’s had too little of it lately. However, all agree that the plan does not address the major drivers of our long-term debt.

Agreement between Republicans and Democrats on discretionary spending levels is a positive sign. With defense and domestic levels agreed to for Fiscal Year (FY) 2015 as well, appropriators can begin their work on appropriations bills in order to complete them by October 1, 2014. This would represent a much-needed return to “regular order.” Such a deal also gives policymakers some breathing room to address the nation’s larger fiscal challenges.1

The bipartisan nature of the budget agreement is to be lauded, but it leaves most of the sequester’s cuts in place and many of the negative effects on defense readiness, domestic programs and the economy will remain. Even with the modest relaxation of the sequester caps on discretionary (annually appropriated) spending, important investment areas ? such as medical research, education and defense R&D ? still face significant restraint. Meanwhile, the real drivers of our long-term debt?spending on entitlements and an inefficient tax code?remain unaddressed.

Policymakers should use the period of certainty that this deal has provided to craft a comprehensive approach to rein in long-term debt and implement policies to boost the country’s anemic recovery from the Great Recession.

Under the deal passed in the House last night, total discretionary spending (defense and non-defense combined) would be set at $1,012 billion in FY 2014 and $1,013 billion in FY 2015. The FY 2014 level is between the Senate-proposed total budget authority of $1,058 billion and the House-proposed total budget authority of $967 billion. (For more information on these spending levels, see here.) 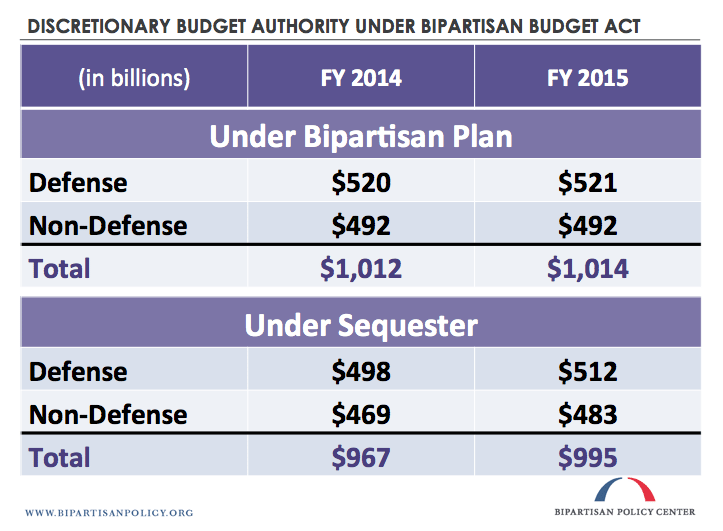 Note: Totals may not sum due to rounding.
Sources: House Budget Committee; Budget Control Act off 2011, as amended 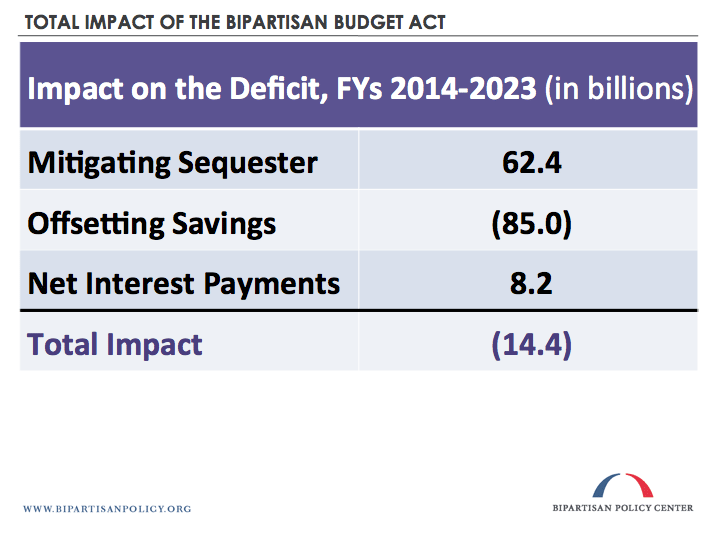 The increased spending levels are more than offset by approximately $85 billion of savings in mandatory spending cuts and revenue increases, according to the Congressional Budget Office (CBO).3 When combined with roughly $8 billion in net interest costs (because the deficit-increasing provisions come in the early part of the budget window) that these policies would produce, the Murray-Ryan agreement would result in net deficit reduction of approximately $14 billion over the ten-year window.

The deficit reduction (all estimates are over the ten-year window) is accomplished through a variety of different measures: 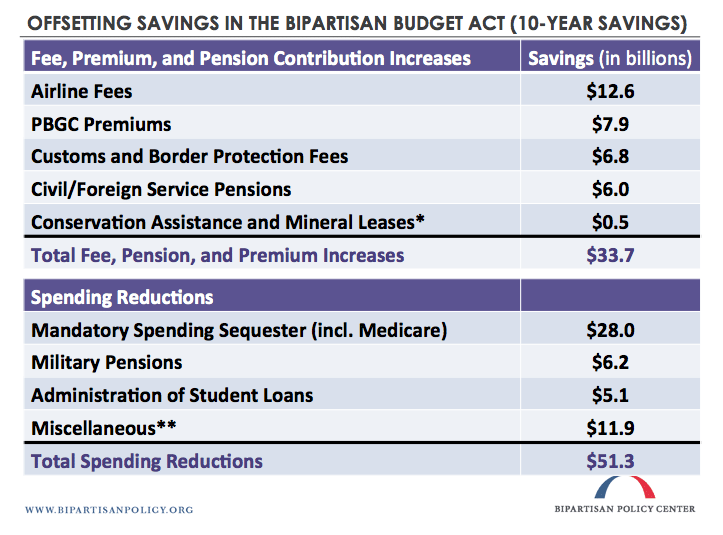 * Includes mineral revenue payment and conservation plan fees.
** Includes reducing waste, fraud, and abuse; funding for oil and gas programs; cancelling unobligated balances; and “self plus one” in FEHBP.
Note: Totals may not sum due to rounding.
Source: Congressional Budget Office cost estimate

1However, this legislation did not include a provision on the debt limit, leaving it as an issue that will need to be addressed early next year.

2 Because not all budget authority is spent, the actual increase in spending (i.e., outlays) from these raised caps is projected to be $62 billion over the ten-year window.

3 The only major provision in the legislation that is scored as a “revenue increase” by CBO is the increase in civil service pension contributions.

5 Pre-funding contributions for Department of Defense (DoD) retirement funds are based on anticipated future retirement spending and are made from discretionary budget authority?so this provision will create more breathing room under DoD’s spending caps. CBO estimates that the provision will decrease discretionary budget authority that must be allocated to government pension contributions by about $8 billion during the 2014-2023 period. As long as DoD remains within the revised discretionary caps (established by the Bipartisan Budget Act), this budget authority can be allotted to other priorities. For more information on this complicated issue, please see http://crfb.org/blogs/offsetting-defense-sequester.

6 CBO notes that the other part of the student loan provisions would effectively just move approximately $3 billion of mandatory higher education funding over to the discretionary side of the budget, meaning that those funds would have to be incorporated under the revised caps that are proposed for non-defense discretionary spending in this legislation.

7 CBO did not include a cost estimate for this provision in its report.

A Review of the Numbers: Discretionary Spending Levels, the Budget Control Act, and the Sequester