The mid-session election of Representative Paul D. Ryan as the new Speaker of the House brought with it a bevy of suggestions for how he can improve the way Congress conducts business. Last week, one column suggested kick-starting the fixes by having members move their families to Washington and schedule five-day workweeks. The Bipartisan Policy Center’s Commission on Political Reform similarly recommended last year that Congress adopt a five-day workweek in its report, Governing in a Polarized America.

As many Congress-watchers have recently observed, the institution has become a Tuesday-Thursday club with members often arriving in the Capitol on Tuesday for votes and returning to their districts on Thursday afternoon or evening. This has led to a pattern of fewer and fewer overall days working in Washington.

Coupled with the election-related demands on their schedule, members of Congress have too little time for their duties to fund and oversee the government and thoughtfully address the policy issues facing the country. Former Senate Majority Leaders Tom Daschle and Trent Lott, co-chairs of BPC’s commission, note, “You can’t run the government of the most powerful nation in the world on Wednesdays alone.”

This short schedule also does not provide members the opportunity for the kind of interpersonal relationship-building that is necessary to fuel the legislative engine. As the commission stated, “Under these circumstances, it is hard to imagine how members of opposing parties can find the time to make real overtures to each other on issues of shared interest.”

To combat this trend, the commission recommends the House of Representatives and the Senate adopt synchronized, five-day workweeks in Washington, with three weeks in session followed by one-week state and district work periods. That type of schedule should translate to approximately 15 total days working in Washington per month.

Starting in January 2015, BPC began tracking how many days Congress spent tending to its legislative duties in Washington when it launched the Healthy Congress Index. The index evaluates how well the current 114th Congress is performing on certain metrics compared to previous years, and is updated each quarter. 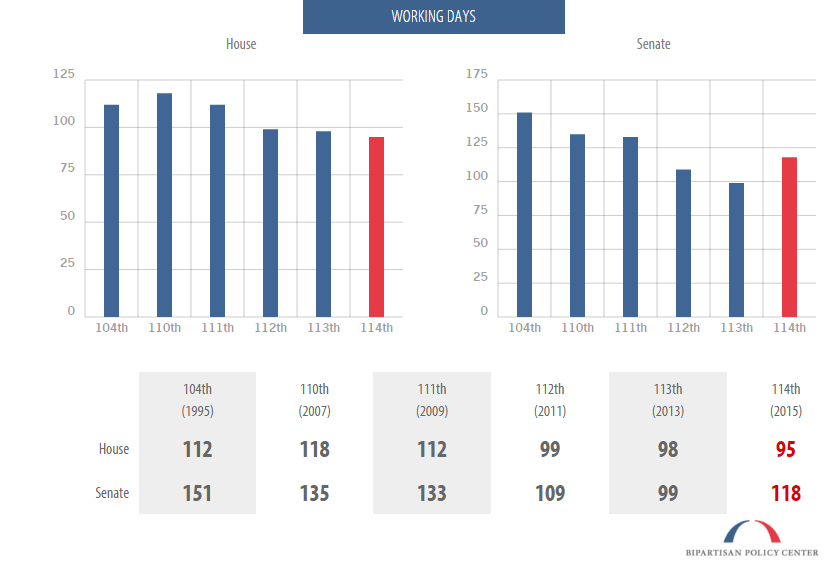 Three-fourths of the way through 2015, the Senate worked more days than in the two most recent previous Congresses. It had conducted legislative business for 118 days this year, compared with 99 and 109 days for the 113th and 112th Congresses, respectively. Though an improvement over recent Congresses, this number of working days still falls short of the 135 we expect by this point in the Congress and as recommended by the commission, and is below the number of days worked in the 111th, 110th, and 104th Congresses.

We recognize that spending too much time in Washington may not be popular among those outside of the Beltway. Constituents are often wary that their representatives have “gone Washington,” and members of Congress have to worry about re-election challengers making similar accusations. With Congress’s approval ratings as low as they are, the incentives for being associated with Washington seem few.

However, as the congressional calendar has had fewer and fewer workdays, the institution has found itself running up against more and more deadlines, often carrying out their most basic responsibilities just as the clock is about to run out. For Congress to tackle the complex challenges the country faces, it needs to spend more time legislating. A five-day workweek would certainly help with that.

Will the Next Speaker Open Up Floor Debate?