In 1986, President Ronald Reagan signed the Immigration Reform and Control Act after almost twenty years of failed legislation and four different attempts at immigration reform. When IRCA eventually passed, it helped legalize almost 3 million undocumented immigrants and imposed stricter restrictions on employers from hiring unauthorized immigrant workers, while trying to secure the U.S.-Mexico border against illegal border crossings. However, IRCA remained relatively ineffective in controlling future unlawful immigration. By not addressing reforms to our legal immigration system or creating new legal pathways for migrants, the U.S. immigration system remained vulnerable to requiring more legalization in the future. Between 1990 and 2007 the U.S. unauthorized population tripled from 3.7 million to 12.2 million, and in 2019, around 10.3 million people were living in the United States without status.

Thirty-five years after the passage of IRCA and several attempts over the past few decades1 to pass comprehensive immigration reform, President Joe Biden released and Congress introduced the U.S. Citizenship Act of 2021. However, like IRCA, the U.S. Citizenship Act leaves a lot to be desired on the legal immigration front, especially regarding high-skilled and lesser-skilled occupations that are related to future U.S. immigration flows. Without meaningful legal immigration reform, President Biden’s bill may provide an immediate and necessary immigration reset but could likely necessitate another broad legalization in the future.

The U.S. Citizenship Act would provide an eight-year track to citizenship to most undocumented immigrants, with 3.3 million unauthorized immigrants eligible for an expedited three-year process. Unauthorized immigrants eligible for a pathway to citizenship include Dreamers, farmworkers, those under the Temporary Protected Status program, and their spouses and children. The bill would also invest a significant number of resources in addressing the root causes of migration from Central America and puts forward a plan for the management of the southern border in hopes of effectively handling future illegal border crossings. However, not creating and implementing new channels for legal immigration across the skill spectrum could mean that unauthorized border crossing is likely to continue.

Border Enforcement as a Panacea?

Much of the immigration reform debate has emphasized increased border enforcement to address these unauthorized migrations. IRCA set out to eliminate illegal border crossing by supplying new technology and increased border funding and resources, as well as implementing requirements for employers to verify the employment eligibility of all new hires. Similarly, the Border Security, Economic Opportunity, and Immigration Modernization Act (S.744), which passed the Senate in 2013, also set out to tighten our southern border by increasing enforcement at the U.S.-Mexico border, adding additional Border Patrol and U.S. Customs and Border Protection officers, and including National Guard support for securing the border, as a precursor to providing a pathway for unauthorized immigrants living in the United States. The U.S. Citizenship Act of 2021 also advances some policy initiatives to manage our southern border by deploying smart technology, which bill sponsors say will help detect and prevent illicit activity, improve situational awareness, and counter transnational crime networks.

While these policies emphasize stricter border control to reduce illegal immigration, the majority of the new undocumented population that enter the United States in recent years do so by overstaying their visas. Without a long-term strategy that buttresses the legal immigration channels to the United States, visa overstays and undocumented migration are likely to continue. While IRCA did implement employer sanctions that made hiring unauthorized workers illegal, research in subsequent years has shown that these provisions were largely ineffective because of a lack of proper compliance enforcement and the proliferation of fraudulent documents to foil the system.

IRCA’s one success in curbing unauthorized border crossing may have been in amending the Immigration and Nationality Act and separating the preexisting H-2 temporary visa program into H-2A and H-2B visas for agricultural and non-agricultural workers. Though both visa programs still require substantial reform, they have provided a legal channel for lesser-skilled labor migration to the United States. According to estimates, the H-2 visa programs helped decrease Mexican illegal border crossing between 2008-2018, demonstrating that migrants are willing to use a legal channel to come to the U.S. if one is available to them. The H-2A program, which is not subject to any visa caps, is a popular program with migrant farmworkers and in spite of challenges, is increasingly being used by farm owners as well. The usage of agricultural visas has continued to increase over the last several years (Figure 1), and, according to estimates by the State Department, there were just over 213,000 visas issued for fiscal year 2020. 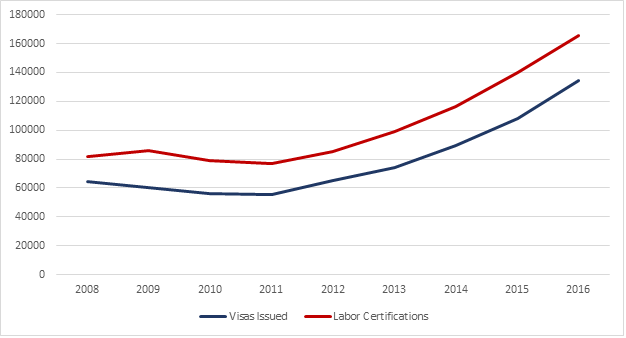 Similarly, the H-2B program has also remained in high demand with businesses requesting more seasonal foreign workers each year, exceeding the annual 66,000 cap. Temporary foreign workers have become an integral part of the U.S. labor market, filling jobs in occupational sectors where employers cannot find U.S. workers for the position, especially in rural and remote states, and seasonal areas. This has remained true even during periods of high unemployment such as when COVID visa restrictions drastically reduced work visas for foreign temporary workers. The demand for H-2B workers to fill labor shortages in the United States has steadily increased since 2010, compelling lawmakers to allow cap increases every year. For example, in FY2016, 119,000 H-2B positions were certified, a 17% increase since 2015. (Figure 2) 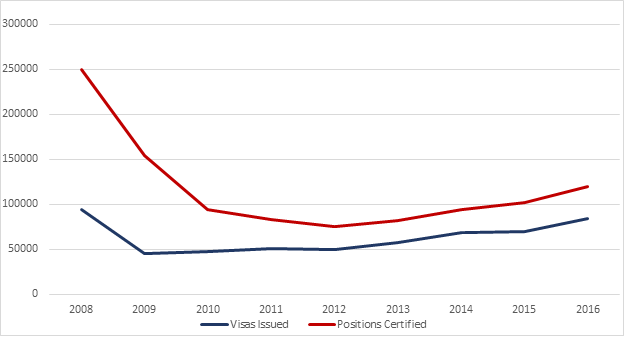 The majority of seasonal workers that enter on lesser-skilled temporary visas such as the H-2A and H-2B programs have historically come from Mexico. For example, out of around 442,000 total H-2A admissions to the United States in FY2019, 94% were Mexican nationals. Similarly, in FY2019 around 72,000 H-2B visas out of approximately 98,000 visas, or 74%, were issued to Mexicans, followed by nationals of Jamaica and Guatemala who got 10% and 3% of the total visa issuance, respectively. Research suggests that Mexicans are more likely to have access to H-2 visas and therefore have a higher representation in the U.S. seasonal labor market. For example, in 2019, Mexican migrants were 32 times more likely to receive H-2 visas than Honduran nationals per capita. Unsurprisingly, Hondurans were 20 times more likely, per capita, to get apprehended at the border than their Mexican counterparts.

These visas have tremendous potential to improve the lives of participants in their respective home countries. The visas provide consistent, albeit seasonal, employment at a “prevailing wage” rate. For example, a study by the Center for Global Development using a sample of Haitian farmers in the United States showed that the short-term agricultural guestworker program benefited poor Haitian families during the post-Haiti earthquake more than any other aid program; roughly doubling their families’ income back home.

Moving Away from Amnesty-Only Approach to Addressing Unauthorized Migration

To avoid the need for another large-scale amnesty in the future, a reorganization of our legal immigration system that incorporates temporary guestworker visa reform may be necessary. Currently, the U.S. Citizenship Act of 2021 would reform our employment-based legal immigration system by raising visa caps on some existing permanent visa categories. However, these cap increases would mostly benefit high-skilled immigrants and their family members who may already be in the United States. The bill, unfortunately, does not offer substantial reform to our temporary guestworker programs nor introduce new visas in the lesser-skilled category.

The U.S. working-age population is rapidly aging, and according to BPC’s research, legal immigration can help reduce the economic challenges that the United States faces due to its demographic changes. U.S. businesses may continue to face labor shortages due to declining fertility rates, and migrants seeking economic opportunities may be able to fill these gaps.

Immigration reform that includes improvements in temporary guest worker programs is also more likely to benefit migrants from Central America. Presently, those fleeing from the Northern Triangle, due to economic challenges in their home countries, have no lawful option, besides asylum, to legally enter the United States. Guestworker visa reforms and other legal pathways for people to access U.S. labor markets may reduce illegal border crossings and better manage Central American migration challenges in the long-term. According to a 2019 report by the Congressional Research Service, nearly 52% of migrants from Central America cited economic opportunity as their reason for fleeing the region. Additionally, the World Bank reports that around 54% of El Salvadorians, 63% of Guatemalans, and 56% of Hondurans are of working age and the ratio of the working age population in these countries is expected to continue to rise. Therefore, it is likely that we will continue to see young people migrate towards the United States in search of job opportunities.

Guestworker programs that facilitate migrants’ access to our labor markets, therefore, might be a benefit to all. But if we continue to prioritize the same enforcement-based approach to border crossing without providing an alternative and accessible route for immigration to migrants, we might end up where we started in a few decades; discussing amnesty for a large group of undocumented immigrants in need of relief and ever-increasing border security.