This is the first post of our Millennials in Retirement Series, which explores how today’s young people will fare in retirement.

Fifty years from now, most millennials will be retired?and they could have significantly more assets than today’s retirees, according to new projections that the Urban Institute prepared for the Bipartisan Policy Center (BPC).1 However, Urban Institute’s projections also show that this rising tide will not lift all Americans, as the bottom half of asset-holders will continue to lack sufficient retirement savings. 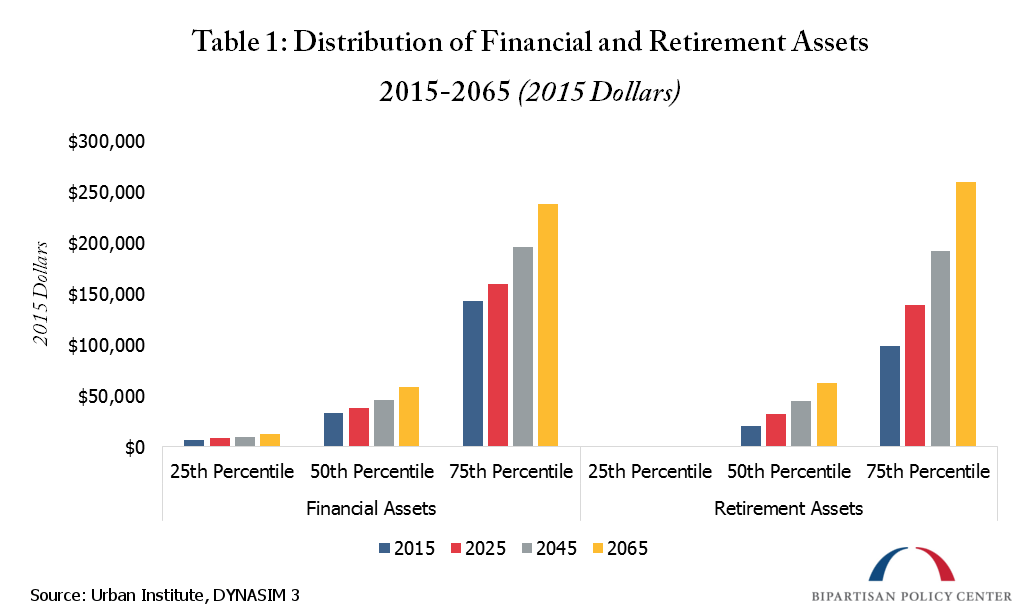 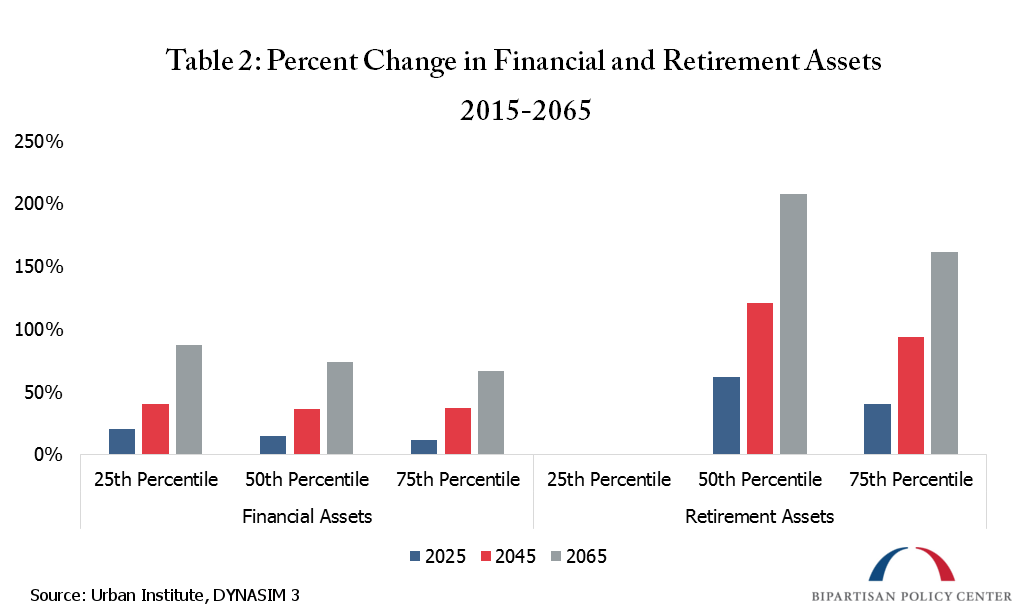 Despite these large projected gains in retirement assets, the prosperity may not be shared equally. Financial assets for individuals at the 25th percentile are projected to grow, but they will not close the gap relative to the median over the next 50 years. This relative lack of savings can be attributed to a variety of factors, such as high rates of unemployment, low earnings, and insufficient financial literacy.

More troubling is that retirement savings at the 25th percentile are projected to remain non-existent, meaning that even 50 years from now, over a quarter of older Americans will have no retirement savings. This problem can be in part attributed to a lack of access to the retirement system?a challenge that BPC’s Commission seeks to address. Among low-wage earners, just 34 percent have access to an employer retirement plan.4 Given this access gap, the lack of retirement savings should come as little surprise. Indeed, surveys indicate that households with a workplace retirement plan are more than four times as likely to save for retirement as those without such a plan.

These new forecasts illuminate both promise and challenges. On the one hand, the majority of Americans can look forward to a more secure retirement than that of their parents (setting aside uncertainty surrounding Social Security, a topic for future posts). This progress is notable, especially in the context of declining traditional pensions. However, the projected lack of savings among those at the bottom of the asset distribution is disheartening. These individuals could benefit from improved access to savings programs.

Although many Americans are understandably worried about their retirement prospects, these new projections indicate that the outlook may be more hopeful than expected. Still, changes are needed to improve retirement security across the income spectrum.

BPC’s Commission on Retirement Security and Personal Savings has convened experts from across the political spectrum to address America’s retirement and savings challenges. In 2016, the Commission will publish recommendations to improve personal savings, increase retirement security, and empower Americans to make prudent financial choices.

1 The Urban Institute’s model bases one’s asset drawdown rate on a number of factors, such as race, homeownership, the presence of a defined benefit pension, and whether or not the retiree was a high-wage earner. Importantly, the model assumes that asset drawdown is independent of retirement income levels, meaning that the model’s results are not dependent on one’s Social Security benefits.

4
“Low-wage earners” is defined as those in the bottom income quartile.