This is the fifth post in our Millennials in Retirement Series, which explores how today’s young people will fare in retirement. Read the first, second, third, and fourth installments of the series.

Social Security has a fundamental problem. Under current law, scheduled benefits cannot be paid in full and on time after the Old-Age and Survivors Insurance Trust Fund is exhausted in 2035. Payable benefits are what can be paid using only incoming dedicated program revenues. Payable benefits are substantially less than scheduled levels. This post explores the consequences for millennials of failing to address this disparity.

The Bipartisan Policy Center has written extensively about the unsustainable finances of Social Security. But what would the actual consequences be for older Americans if policymakers failed to put the program on secure financial footing? New projections from the Urban Institute, which were prepared for BPC, suggest that older Americans at the bottom of the economic ladder would be hit the hardest.

Under the payable scenario, benefits would be reduced for all beneficiaries by roughly 23 percent, compared to scheduled levels, starting in 2035. The reduction would grow slightly in future years as the gap between program income and scheduled benefits widens. 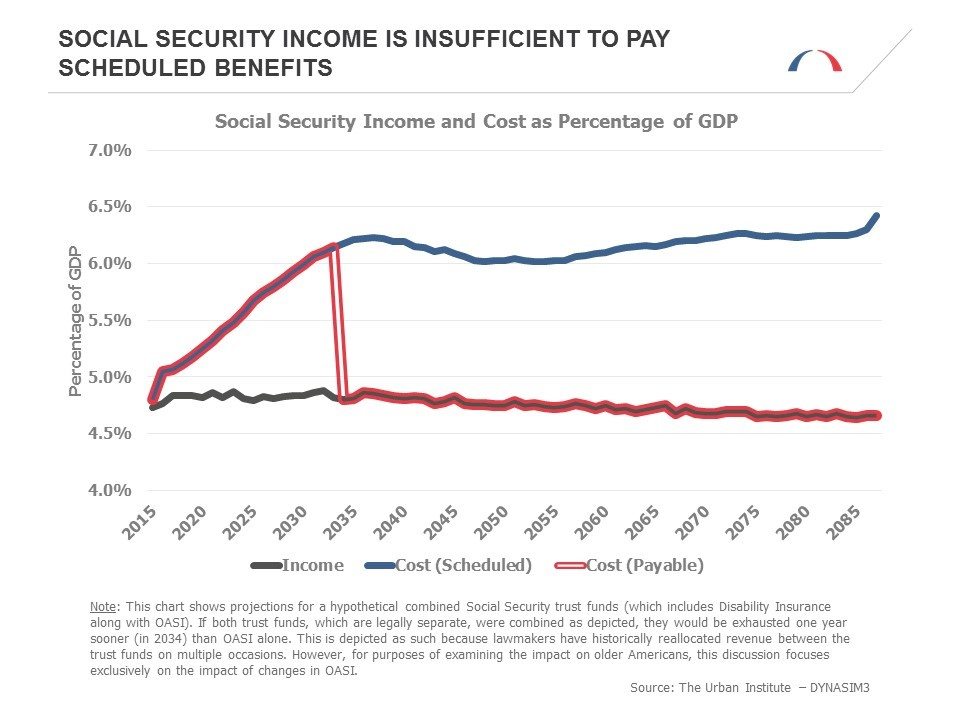 The chart below illustrates the projected difference in benefits between the scheduled and payable scenarios for older Americans in 2065. These are essentially the projected levels of Social Security benefits for Millennials who are currently in the early stages of their professional lives. 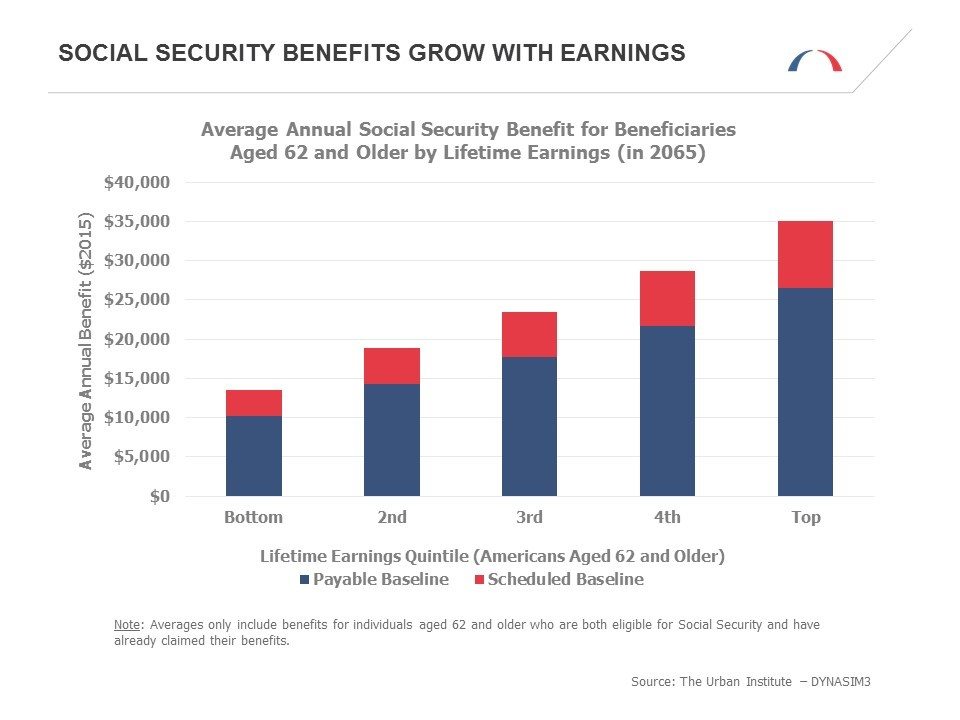 Average Social Security benefits increase with lifetime earnings. Likewise, the difference between scheduled and payable benefit levels is also greatest for individuals who earned the most over their lifetimes. But across the income distribution, the disparity between what future beneficiaries are scheduled to receive and what is payable with current revenue sources is substantial.

Moreover, individuals with higher lifetime earnings are more likely to have other resources at their disposal (such as 401(k) retirement savings plans, defined benefit pensions, or personal savings) which represent a greater share of their income in retirement. The result is that individuals who have earned the least over their careers would see the largest proportional reductions under the payable benefits scenario. 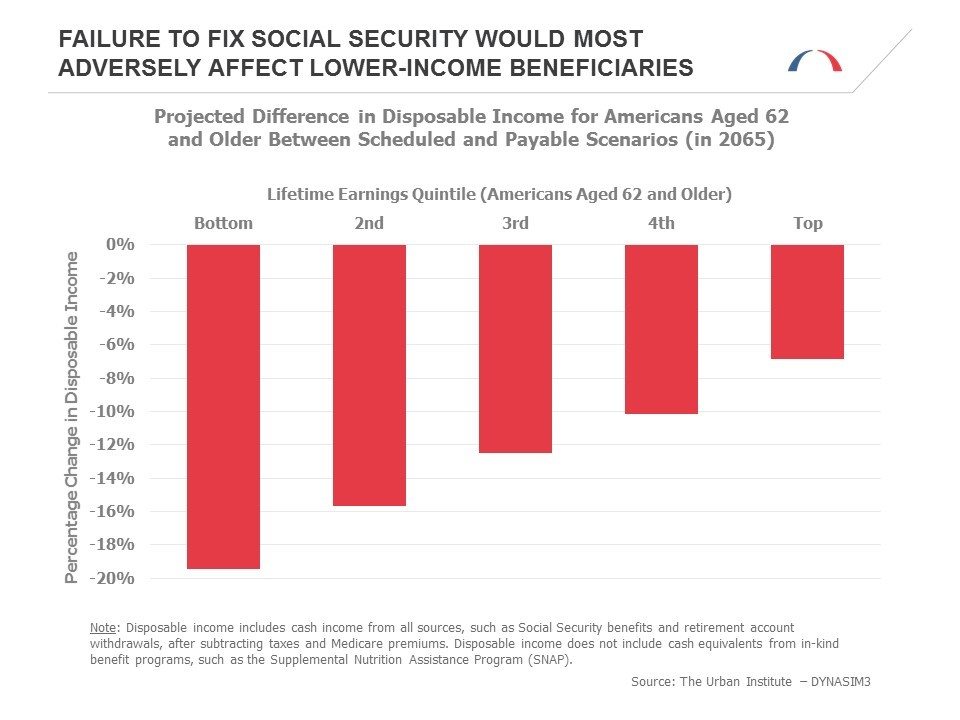 Such a steep reduction for older Americans with lower incomes would increase poverty. In an earlier post, we discussed how poverty under scheduled benefits is projected to decline from 9 percent of the population aged 62 and older today to 5.3 percent in 2065, when many Millennials will be in retirement. However, under the payable benefits scenario, the poverty rate among the age-62-and-older population would be 7.6 percent (almost 45 percent higher) in 2065. 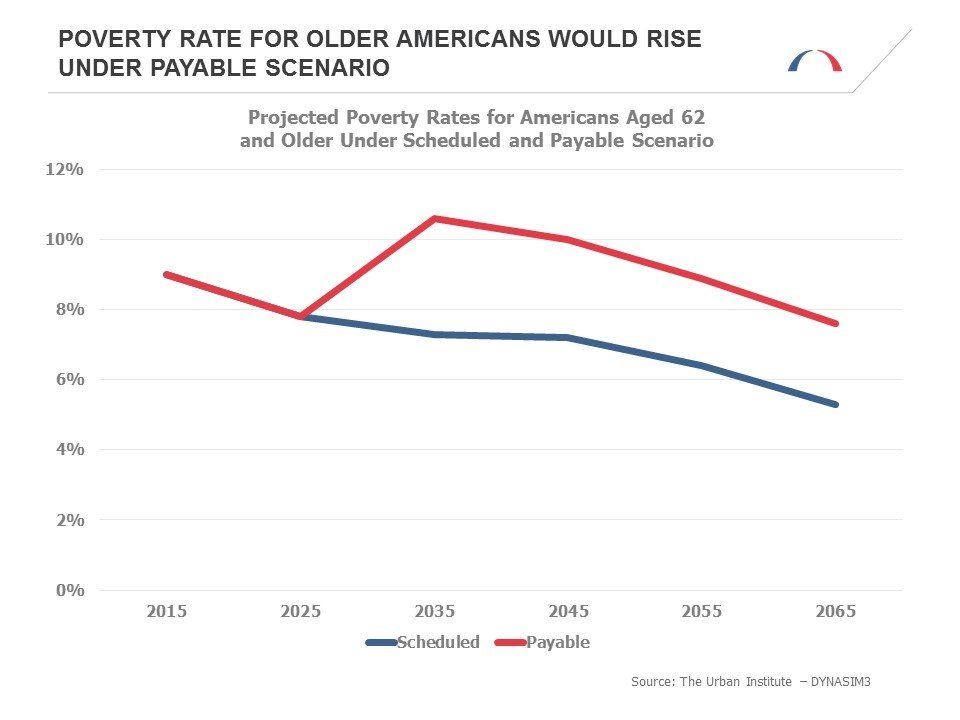 Failure to secure the finances of Social Security would place the greatest burden on individuals who can least afford it. Additionally, uncertainty surrounding future Social Security tax and benefit levels inhibits younger generations of workers who are trying to plan their retirement and structure their savings. Policymakers must fix the program’s finances so that Social Security continues to be a reliable foundation of retirement income for both current and future generations.

Millennials in Retirement: How Does Social Security Redistribute Earnings?