This is the fourth post in our Millennials in Retirement Series, which explores how today’s young people will fare in retirement. Read the first, second, and third installments of the series.

New projections from the Urban Institute, which were prepared for the Bipartisan Policy Center, underscore the redistributive nature of the Social Security system.

Social Security’s benefit formula is progressive, meaning that most individuals with lower lifetime earnings receive more from Social Security benefits than they paid into the program during their working years, while those with higher earnings pay more into the program than they receive back in benefits. This redistribution of income from higher earners to lower earners in retirement is responsible for the significant poverty reduction among older Americans enabled by Social Security. 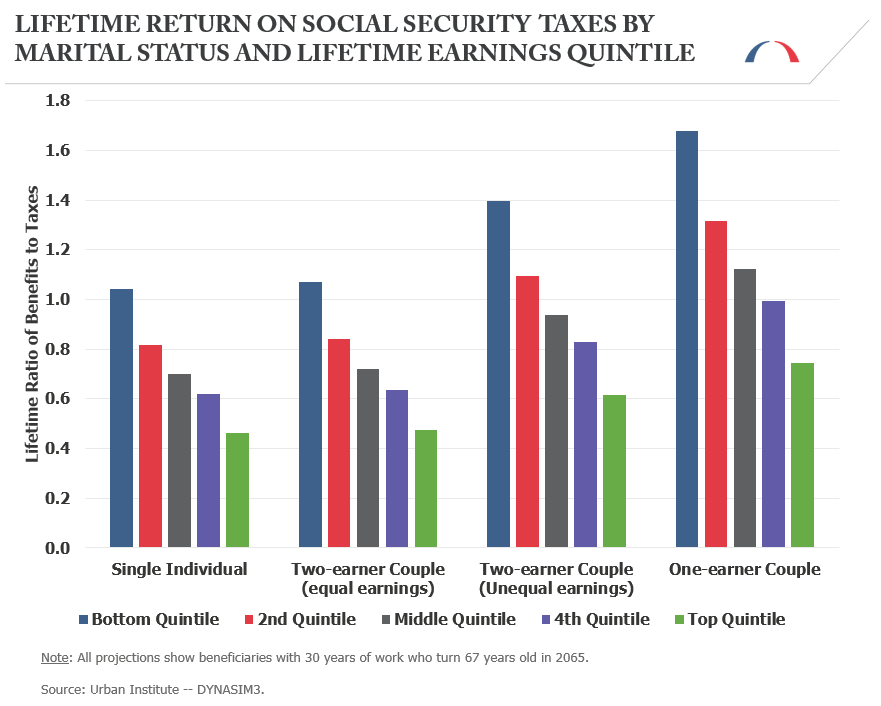 The chart above also highlights another form of wealth transfer: the subsidy given to spouses who do not work, paid for by those who do. Currently, individuals are entitled to a benefit that is at least half the size of their spouse’s?regardless of their own work history. For one-earner couples, this provides substantially more benefits than the household paid in taxes. As the Social Security system matures, most households (except for those in the bottom lifetime-earnings quintile) will pay more in taxes than they will receive in benefits (i.e., ratios less than 1.0). The exception is single-earner couples, the majority of whom will continue to receive greater benefits than taxes paid.

The Social Security benefit formula also provides a better return to those with fewer years of earnings because it applies a progressive formula to the average earnings from an individual’s 35 highest earning years rather than each year individually. For example, a worker who earns $50,000 for 15 years will receive a greater return on each dollar paid in payroll taxes than one who earns the same annual amount for 30 years. Each additional year of earnings will lead to a smaller increase in eventual benefits than the year before, even if annual earnings stay constant. The chart below shows how the current benefit formula redistributes earnings from those with more years in the workforce to those with fewer. 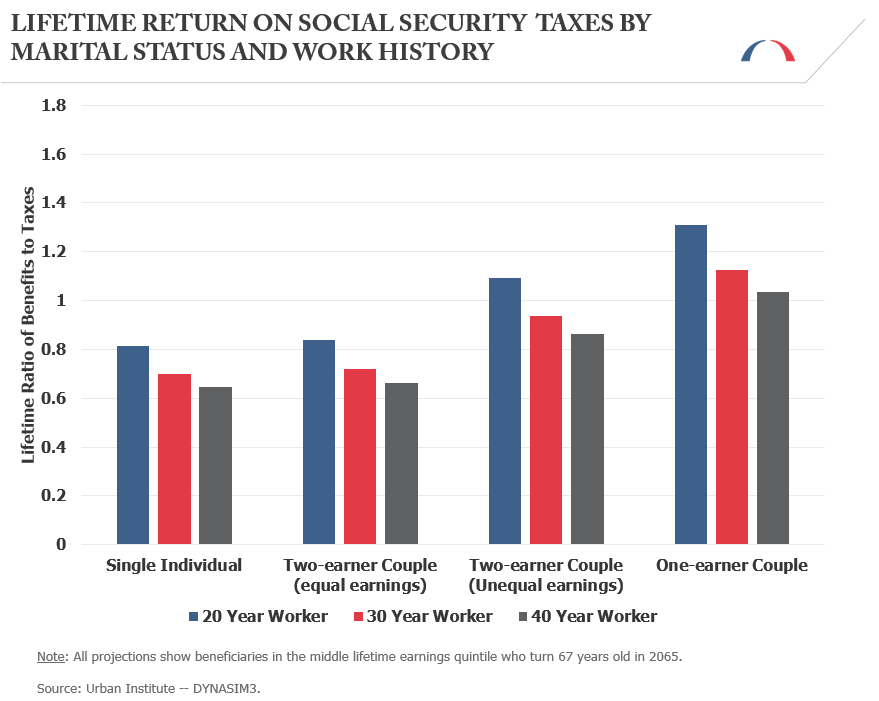 Work incentives are weakened further because the benefit formula only accounts for an individual’s 35 highest earning years. Individuals who have worked for 35 years or more will see little or no increase in their future Social Security benefit for working additional years but will still owe full payroll taxes on their earnings. This may serve as a disincentive for them to remain in the workforce.

The weak work incentives of the benefit formula also undermine the progressivity of Social Security. While most individuals with short working lives are lower-income, some are higher-income individuals who simply chose to spend fewer years in the workforce. For example, an individual who earns $100,000 for 15 years will receive the same benefit as a worker who earned $50,000 for 30 years.1 This is an odd result for a program that uses a highly progressive benefit formula, as presumably a high-income individual who works for only 15 years has other resources than Social Security to finance retirement.

At some point in the near future, policymakers will need to change Social Security to ensure the financial sustainability of the program. As part of those reforms, they might consider the work incentives of the program and target benefits to individuals who have both earned their benefits and need those benefits the most.

Note: These projections assume that benefits are limited to levels payable with existing financing sources and that the benefit structure is otherwise unchanged. Under current projections , the Social Security Old-Age and Survivors Insurance Trust Fund will be exhausted by 2035, at which point program revenue could finance 77 percent of scheduled benefits.

1 If an individual does not have at least 35 years of earnings, the missing years are counted as zeroes.