This is the second post in our Millennials in Retirement Series, which explores how today’s young people will fare in retirement. Read the first installment of the series.

When Millennials retire, they will be less likely to live in poverty than today’s retirees. That is the finding of new projections from the Urban Institute, which were prepared for the Bipartisan Policy Center. If current trends prevail, however, wide disparities will remain based on factors such as race, ethnicity and education level.

By 2065, the poverty rate for Americans aged 62 and older is projected to decrease from 9 percent in 2015 to 5.3 percent. This decline is forecast to apply across demographic groups, with poverty decreasing by over 50 percent among whites, Hispanics, and African Americans. 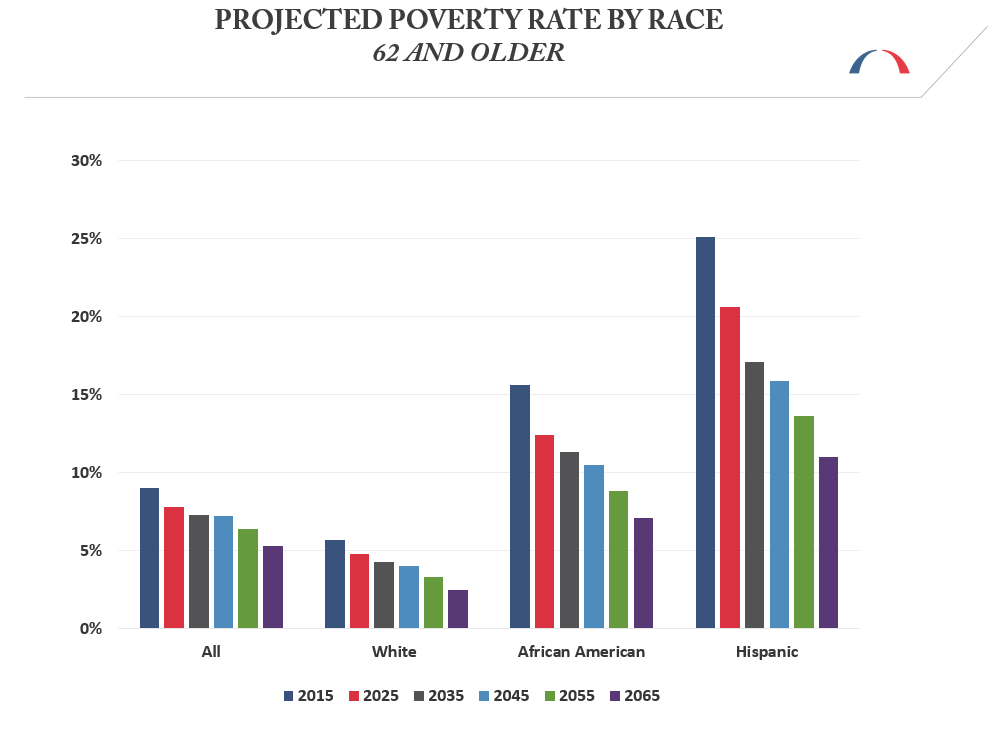 While these are striking improvements, significant inequalities are projected to persist. Among African Americans, poverty is forecast to drop from 15.6 percent to 7.1 percent by 2065, remaining almost three times greater than the white poverty rate, which Urban Institute projects will decline from 5.9 percent to 2.5 percent. Similarly, the poverty rate among Hispanics is expected to decrease from 25.1 percent in 2015 to 11 percent in 2065, remaining over four times the poverty rate for whites.

Poverty is also projected to decline across educational backgrounds. For bachelor’s degree holders aged 62 and older, poverty is expected to decline from 3.2 percent today to 1.8 percent in 2065 (a 44 percent decrease). For those with some college, the projected percentage decline is similar?from 6 percent to 3.4 percent (a 43 percent decrease). Among individuals with only a high school diploma, poverty is forecast to decrease from 9.4 percent to 6.3 percent (a 33 percent decline). For those lacking a high school degree, the poverty rate will see a comparatively smaller improvement, declining from 21.4 percent to 18.2 percent (a 15 percent decline). This largely reflects the fact that many high school non-completers tend to have inconsistent working careers and thus collect less (or no) Social Security benefits. 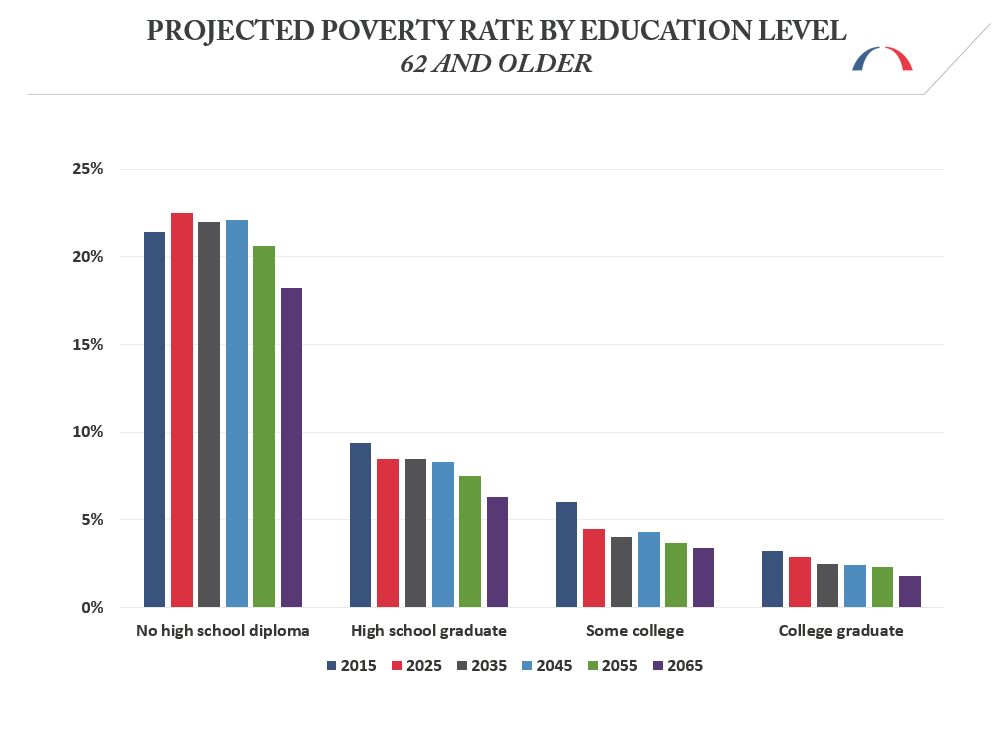 What stands out?beyond the declines in poverty?is that Millennials will face an even larger premium for degree attainment. While today’s retired high school dropouts are roughly seven times more likely to live in poverty than their peers who graduated college, that ratio is projected to jump to 10 for the Millennial generation. (One brighter note is that Millennials tend to be more educated than previous generations, which means that a smaller proportion of retirees in 2065 will have low levels of education.)

Much of the large poverty reductions seen in these projections can be attributed to the fact that the Social Security benefit formula is indexed to wages, while the poverty line is set relative to prices. Because wages generally grow faster than inflation, Social Security lifts an increasing percentage of older Americans out of poverty over time. As such, the Urban Institute projections also come with a major caveat: they assume the full payment of scheduled Social Security benefits over the next 50 years. This outcome is far from certain, as the program’s trust fund is set to run out by 2035, at which point, absent policy changes, benefits would be reduced by 25 percent across-the-board.

Overall, these projections send mixed messages to Millennials about their retirement prospects. The broad declines in poverty are promising, but certain groups will continue to struggle to a greater extent than others. Finally, these forecasts display the vital importance of charting a sustainable future for Social Security, which serves as the financial bedrock of retirement for millions of Americans.

BPC’s Commission on Retirement Security and Personal Savings has convened experts from across the political spectrum to address America’s retirement and savings challenges. In 2016, the commission will publish recommendations to improve personal savings, increase retirement security, and empower Americans to make prudent financial choices.

Workers Move Around, So Should Their 401(k)