The Bipartisan Policy Center’s Senior Health and Housing Task Force recently released its recommendations to promote healthy aging among America’s rapidly expanding senior population. Given the many constraints on the federal budget and projected growth in the national debt, the task force worked from the premise that any additional federal spending proposed should primarily help the most vulnerable, namely low-income older Americans. Yet, as discussed in our report, policymakers clearly have a role to play helping middle-income older adults age with options in their homes and communities.

Older adults around the country face a number of distinct challenges. In particular, the personal savings and home equity needed to support aging in place and to pay for health care, long-term services and supports, and other needs will fall woefully short for millions of seniors. According to Urban Institute projections for BPC’s Commission on Retirement Security and Personal Savings, even individuals in the 75th percentile of retirement assets, with around $130,000 in retirement savings, will have difficulty financing a decades-long retirement. 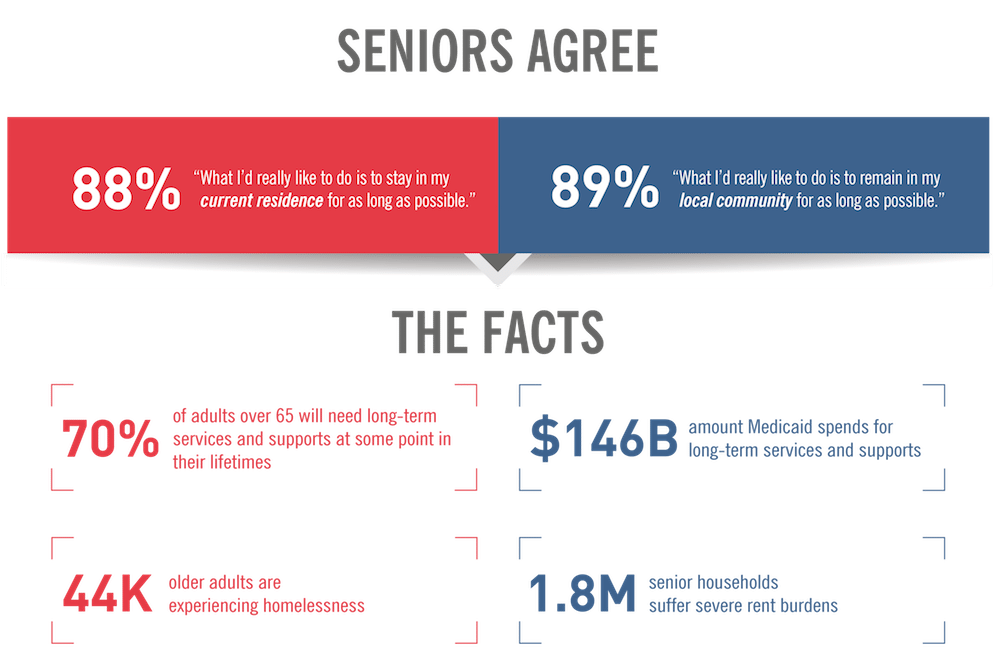 The collapse of the housing market and subsequent recession wreaked havoc on the savings, home equity, and financial security of many Americans. Households and communities have not uniformly recovered, leaving even middle-income Americans around the country still struggling. One trend to emerge from the crisis is the increasing share of older homeowners carrying mortgage debt, and more of it, later in life. This will likely have an adverse impact on households with fixed incomes and restrain the ability of seniors to finance retirement and age with options in their communities. Additionally, the current homeownership rate for “near seniors”, those between the ages of 55 and 64, is 75.7 percent, about six percentage points below the rate of a decade ago. A growing number of older adults are renting and a growing number face housing cost-burdens (paying more than 30 percent of income on housing).

These stark realities define the challenge for middle-income seniors. Our report focuses on four specific policy opportunities: 1) building more affordable and suitable housing for older adults; 2) making homes and communities friendly for all ages; 3) better integrating health care and supportive services with housing; and 4) deploying technologies more widely to help all Americans age safely and comfortably. While the report’s recommendations are relatively modest in scope, we are convinced their adoption would have a materially beneficial impact on the growing number of middle-income seniors.