In the summer of 2014, an unprecedented number of unaccompanied minors from Central America arrived at the southern border of the United States. The Department of Homeland Security (DHS) reported that in FY 2014, 68,541 unaccompanied minors were apprehended at the border, up from 38,759 in FY 2013. The increase was attributed to more Central American children and family units making the trip up through Mexico.

In FY 2015, the number of apprehensions of unaccompanied Central American minors has fallen by 51 percent compared to the first eight months of FY 2014. While a variety of factors are responsible for the decrease, stepped up border enforcement and security efforts by the Mexican government has certainly contributed to the reduction.

The border between Mexico and Guatemala is famously porous. According to Univision, “crossing from Guatemala to Mexico through the Suchiate River in rafts made from inflatable tires takes less than ten minutes,” and costs about $2. After crossing the border, migrants heading to the United States either pay smugglers to take them north or hitch a ride on cargo trains, which are known as “La Bestia” (the “Beast”) because of the dangers faced by migrants who ride on the top or sides of the fast-moving cars. DHS officials were aware of how easy it was for migrants to cross into Mexico. In September 2012, Alan Bersin, the assistant secretary of international affairs at DHS, remarked that the United States’ southern border is effectively the Mexican border with Guatemala.

The Mexican government has received funding from the United States to improve its security programs. Through the Mérida Initiative, Mexico received $194.2 million in FY 2014. The Mérida Initiative is a bilateral partnership between the United States and Mexico that encompasses a variety of counter trafficking and security programs, but a portion of the funds are specifically allocated for the Mexican Southern Border program. According to CRS, the State Department and DHS have provided inspection and surveillance equipment as well as training for border personnel.

Increase in Deportations from Mexico

The new border program seems to be more effective in deporting Central Americans who illegally enter Mexico. In the first three months of 2015, deportations of Central American minors from Mexico have increased by 82 percent compared to 2014 and 239 percent compared to 2013 (1,600 deported in 2013, 2,982 in 2014, and 5,432 in 2015). Unfortunately it is not possible to compare data for the rest of 2015 so far because the Mexican government has not released it. However, apprehensions at the U.S. border are also down. Unaccompanied minor apprehensions in May of FY 2015 are 37 percent of the May FY 2014 total. 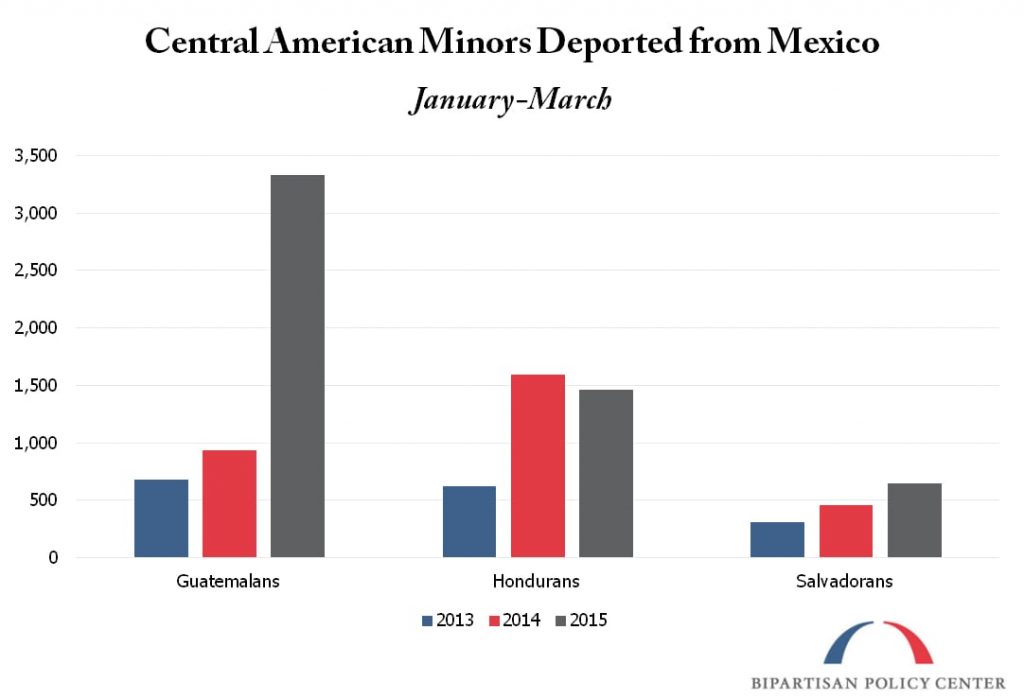 The new border program has also led to an increase in deportations of Central Americans of all ages. During the months of January, February, and March, deportations have increased from 19,762 in 2013 to 38,844 in 2015.

Guatemalans are leading the number of deportations from Mexico in both the number of minors and Central Americans overall. (Guatemalan minors and family units are also being apprehended at a higher rate than other Central Americans at the U.S. border so far this year). It is not obvious why more Guatemalans migrate because all three nations of the so-called “Northern Triangle” have similar socioeconomic indicators. A GAO report notes all three countries face significant challenges in education, housing, and healthcare, and according to World Bank data, over 60 percent of Hondurans, 50 percent of Guatemalans, and 30 percent of Salvadorans live below the poverty line. While crime is a problem in all three countries, it is even worse in El Salvador and Honduras. The Washington Post reported that El Salvador could become the deadliest nation in the Western Hemisphere in 2015, while Honduras has had the highest murder rate in the world since 2010.

One key difference between Guatemala and its neighbors that could explain the higher numbers could be the high number of non-Spanish speaking persons in Guatemala, reducing the effectiveness of the public awareness campaigns launched in 2014 by DHS. The “Know the Facts” campaign put into effect after the summer surge last year refutes the rumors of permisos to stay in the United States and explicitly states that DACA and DAPA do not apply to those who have recently arrived. The campaign included Spanish radio and television announcements and English and Spanish print products in media in all three countries. While these programs might have dissuaded migrants in El Salvador and Honduras, it could be having a lesser impact in Guatemala, where 40 percent of Guatemalans speak a variety of indigenous languages. In comparison, less than 1 percent of the population in Honduras and El Salvador are indigenous language speakers. The unchecked rumors of permisos among the indigenous Guatemalan population might explain their higher rate of migration in in FY 2015.

Despite increased enforcement in Mexico, many migrants are still reaching the U.S. border, and the linguistic diversity is also affecting the processing of Guatemalans and other indigenous language speakers through the U.S immigration system. While DHS does not monitor how many minors are of Mayan descent, Mayan languages have become more frequently used in immigration court. In FY 2013 Quiche, an indigenous Mayan language, was the 25th most common language used in court. In FY 2014, there was a dramatic increase in Mayan languages: Mam was 16th, Quiche was 17th, and Konojbal (Q’anjob’al) was 25th most common. These are only three of Guatemala’s 23 officially recognized indigenous languages and this linguistic diversity is has made it difficult to find translators and overextending the few Mayan translators already employed by the court. So far in FY 2015, 8,048 Guatemalan unaccompanied minors and 6,914 family units have been apprehended by Border Patrol.

How many unaccompanied children show up for immigration court?