The Bipartisan Policy Center (BPC) recently released A Bipartisan Rx for Patient-Centered Care and System-Wide Cost Containment, an effort led by former Senators Tom Daschle, Bill Frist, Pete Domenici, and former OMB and CBO Director Dr. Alice Rivlin, that calls for a comprehensive approach to system-wide health care improvement and cost containment. As policymakers consider changes to federal health programs and the tax code, versions of many of the proposals included in our report have entered the national discussion. In a series of posts, we will provide a deeper dive into some of our proposals, along with comparisons to similar proposals, and, very importantly, how they fit into broader efforts for reform. Read the first and second entries in the series.

Organized systems of care delivery and payment are essential to building a sustainable, higher quality, cost effective health care system. These systems can come in many different forms, but all share the critical attributes of quality, accountability and coordination. One of the more prominent examples of such a system is an Accountable Care Organization or “ACO,” in which health care providers agree to be held accountable for the cost of care (via spending targets) and the quality of care (via performance metrics) they deliver. A critical feature, and driving incentive for providers, is the opportunity to share in savings from improved care quality and reduced costs. While there is early promise for ACO-type models, the evidence-base is nascent, and growing out of the imperative to move away from our current fee-for-service reimbursement system, which drives inefficiencies, misaligned incentives, and fragmented care delivery. BPC’s report recognizes the need to increasingly shift towards new, value-based payment and delivery models, and focuses on Medicare’s role in jump-starting system-wide reform.

Medicare, historically a forerunner in establishing payment policies for the entire health system, can?and should?lead the way to develop a stronger health care delivery system. As the largest payer, Medicare offers the best opportunity to fundamentally change the way we pay for and deliver care system-wide. The Affordable Care Act (ACA) made an important first step towards meaningful payment and delivery reform in Medicare with the creation of the Medicare Shared Savings Program (MSSP), allowing participating providers to form ACOs and share in the savings that result from delivering patient care more efficiently. The Center for Medicare and Medicaid Innovation (CMMI) also created the Pioneer ACO Program, an accelerated version of the MSSP for providers who were further along in developing the strategies and infrastructure needed to deliver coordinated care, and the Advance Payment ACO Model, to help smaller practices and rural providers participate in MSSP who have less access to upfront capital. Unlike previous strategies to impose structural reforms on health care delivery and payment, such as Health Maintenance Organizations (HMOs), providers play a central role in the formation and governance of ACOs.

While BPC believes that MSSP and Pioneer ACOs, which build on previous efforts in the private sector and have garnered substantial interest from providers, are an important start toward the goals of higher-quality and better-coordinated care, critical improvements should be made to improve ACOs’ chance of success. BPC recognizes that the Centers for Medicare and Medicaid Services (CMS) has been limited in its authority to make many of these changes, and recommends the following proposal having had the benefit of observing the successes and challenges of MSSP and Pioneer ACOs to date. BPC proposes that Medicare accelerate the transition to value-based payment models by creating a significantly enhanced version of ACOs, called “Medicare Networks.” Medicare Networks would be a new option under traditional Medicare which would retain all of traditional Medicare’s hallmarks, including a defined benefit and open access to all Medicare providers. These Networks would also contain several improvements, including an enrollment model and new, stronger incentives for beneficiaries and providers to participate. 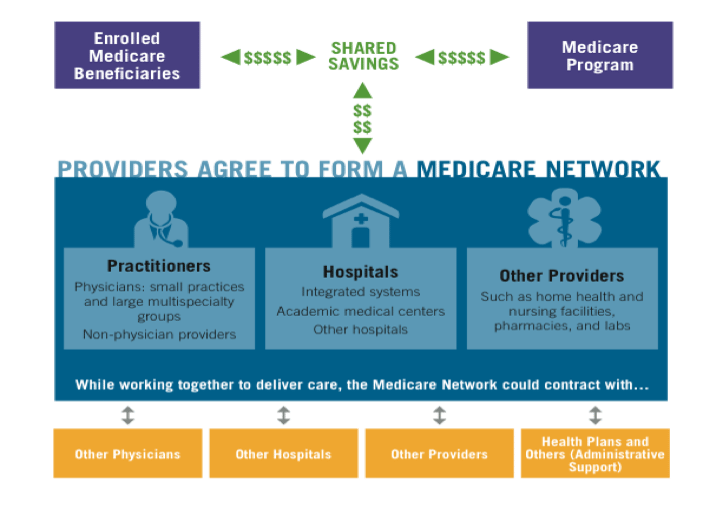 Some key elements of the Medicare Networks include: 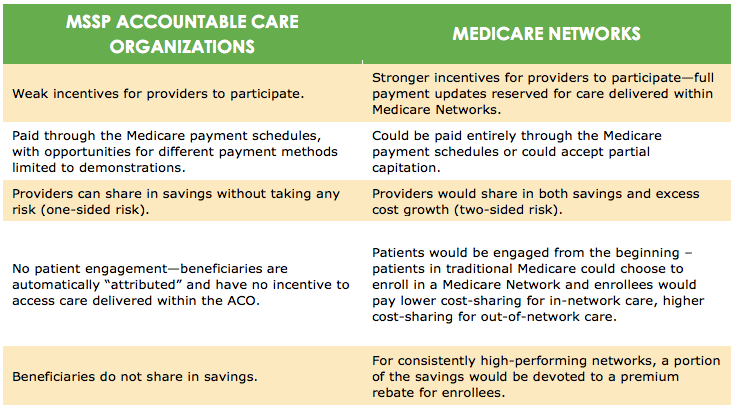 There are also several similarities between MSSP ACOs and Medicare Networks. Like today’s ACOs, Medicare Networks would be provider-led, but could always contract with other organizations, including health plans, for various services, such as analytics and management support. Both create an environment for providers to collaborate and coordinate care for beneficiaries, ensure that providers are accountable for the care of a defined group, and enable providers to share in savings if they meet quality and efficiency targets. MSSP ACOs and Medicare Networks are also both part of traditional Medicare, with the federal government bearing insurance risk.

BPC also recognizes that there will need to be additional considerations as Medicare Networks are formed, including the likelihood that the adoption of advanced payment models will take longer in some regions. The Secretary of Health and Human Services should have authority to continue to provide normal updates to fee-for-service providers when necessary to ensure beneficiary access to care, particularly in rural areas or areas where Medicare Networks have not yet formed. Additionally, Medicare Networks may need pathways to access capital (BPC proposes loan guarantees for physician-led Networks and low-interest loans for rural Networks), additional and appropriate implementation resources, such as timely access to relevant data, from the Centers for Medicare and Medicaid Services (CMS), and opportunities to coordinate with Part D Prescription Drug Plans and adopt progressively advanced payment models.

Many health policy experts, stakeholders, and industry leaders believe that an ACO-type model could be a key to success in moving away from traditional volume-based reimbursements and toward value-based reimbursements. Thus far, concrete evidence of the effectiveness of ACOs in lowering health care costs is limited but growing. The early success of some private sector ACOs and the rapid formation within the MSSP program indicate that the ACO concept may have a promising future. A number of private sector leaders and providers have already embraced the ACO concept. As of late 2011, (prior to the official launch of the MSSP in early 2012) over 160 ACOs in over 40 states existed in the private sector. Today, that number exceeds 220. In total, including Medicare ACOs, there are nearly 450 ACOs operating in the United States.

But with so many ACOs just getting off the ground ? and performing the complex work of building the necessary health information technology infrastructure to facilitate performance measurement and communication across various settings of care delivery ? it is difficult to draw conclusions about the potential for long term success. What we do know is that our current volume-based, fee-for-service reimbursement system results in fragmented, inefficient and uncoordinated care, driving up costs and leaving patients unsatisfied and, too many times, unhealthy.

The goals of ACOs ? to enhance quality and lower costs ? are the right ones, but the current structure will need some adjustments to achieve the ultimate goal of moving away from fee-for-service. BPC believes that if you better align critical financial incentives, significantly strengthen beneficiary and provider engagement, and provide key tools for providers to effectively coordinate care ? and be held accountable for that coordination ? Medicare Networks could be just the pathway to a more efficient, higher-quality health care system. While not the goal, BPC-commissioned analysis from Acumen LLC shows that such reforms could also provide substantial federal budget savings. In conjunction with introducing competitive bidding to Medicare Advantage (which we will discuss in a future post), these reforms are projected to reduce the debt by $178 billion over the next ten years above and beyond the costs of replacing the SGR.