Amid the ongoing debate about marijuana policy in America, banks are becoming wedged between states that have legalized marijuana and federal law under which marijuana is illegal. This conflicting marijuana policy has also exposed fault lines among regional Federal Reserve banks. Four states have fully legalized marijuana?Colorado, Oregon, Washington and Alaska. Other states have legalized marijuana for medical purposes. Among those, California stands out with medical marijuana sales of more than $1 billion, including from commercial stores dedicated to that purpose. However, under federal law, marijuana continues to be illegal. This creates a difficult environment for banks, the payment industry, and their regulators. While data is scarce, it appears that regional Federal Reserve banks are taking different approaches to marijuana banking, with different consequences for businesses operating in those states.

When States and the Federal Government Collide

Marijuana is illegal under federal law while many states have legalized it, to various degrees. Where federal and state law conflict, the Supremacy Clause of the Constitution holds that federal law trumps state law.1 However, different parts of the federal government have chosen to allow states to pursue their own marijuana policy to varying degrees. For example, the section of the Treasury Department that deals with financial crimes (FinCEN) has created a new reporting structure solely to deal with state-allowed marijuana transactions. This has resulted in uncertainty about federal government enforcement of federal marijuana laws against businesses operating in accordance with state law. That affects how banks treat those businesses, including the decision whether or not to accept them as customers. 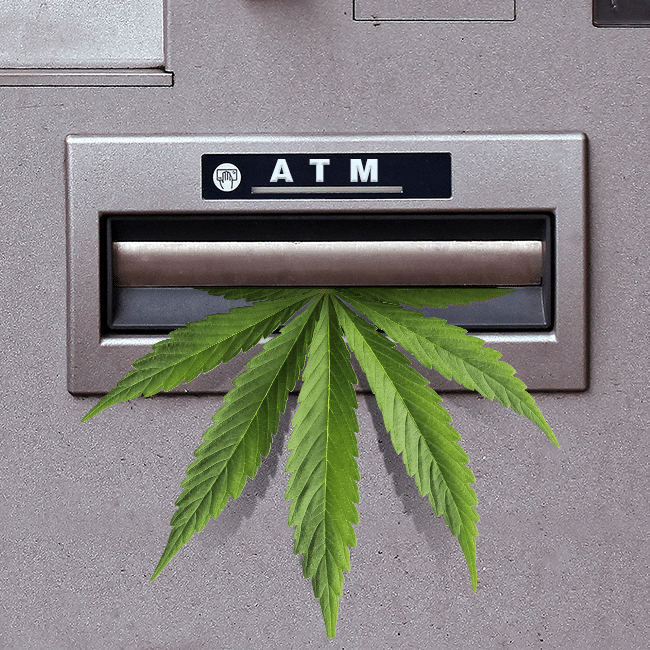 Access to the banking system is important for a marijuana business for a number of reasons, including access to the payment system. For businesses to accept non-cash forms of payment, like credit and debit cards, they need a relationship with a bank or payment processing company that ultimately uses a bank. Additionally, if you lack access to a bank account for your business, you must pay employees, purchase equipment, and pay taxes all in cash. This means that many marijuana businesses must personally drive tens and sometimes hundreds of thousands of dollars in cash to state capitals to pay their taxes. Blocking marijuana business access to the banking system provides an opportunity for crime as was the case in a gruesome attack that occurred in California where thieves attacked a marijuana dispensary owner because they knew the business was cash only.

If banks choose to go along with state policy they may face the wrath of federal regulators and the steep fines that come along with it. If banks stay away, then marijuana businesses are not served and the problems described above remain.

Since each regional bank can set its own policy, there could be a scenario where a bank in Oregon and a bank in Colorado operate under very different policy responses to the same federal laws and regulations. This is exactly what has occurred between the San Francisco Fed (SF-Fed) and the Kansas City Fed (KC-Fed) with marijuana. Four of the states with legal commercial marijuana?California, Oregon, Washington and Alaska?are in the SF-Fed’s region while Colorado is within the KC-Fed.

The SF-Fed has issued guidance to its member banks through presentations available on its website and references to federal and state guidance on the issue. David Thomas, senior manager of the SF-Fed’s Financial Institution Supervision and Credit division, publicly stated that 105 financial institutions were engaged in providing financial services to marijuana-related businesses. A search of the SF-Fed’s website reveals 11 marijuana related results.

By contrast, a search of the KC-Fed’s website yields zero results. No guidance or advisory outreach despite the fact that the KC-Fed’s district includes Colorado, which legalized marijuana in 2012. The KC-Fed’s policy on marijuana banking is only publicly available due to litigation. Currently, a Colorado state-chartered credit union incorporated for the sole purpose of servicing marijuana related businesses is suing the KC-Fed for denying it access to the federal payment system.4 The lawsuit indicates that the KC-Fed may be taking a tougher stance on marijuana banking than the SF-Fed. This is a signal that each regional bank is independently deciding whether to go along with state marijuana initiatives or resist them. That raises the question of what is the proper role of the regional banks as it relates to state governments attempting to legalize marijuana.

Congress has sought to address this issue, with some encouraging bipartisanship. Legislation introduced by Senator Jeff Merkley (D-OR) S.1726, the Marijuana Business Access to Banking Act of 2015, would grant banks the explicit authority to bank or not bank state licensed marijuana firms while protecting them from federal prosecution. Merkley’s bill has seven bipartisan cosponsors, including Senators Bernie Sanders (I-VT) and Rand Paul (R-KY). Additionally, the FY2016 Financial Services and General Government Appropriations Act recently passed out of the Senate Committee on Appropriations and contains an amendment with bipartisan support that would limit enforcement actions against financial institutions banking marijuana firms. It is important to note, however, that as the Appropriations Bill only covers agencies that receive appropriated money from Congress, it would not have any direct effect on the Federal Reserve, which does not receive appropriations from Congress.

The Federal Reserve Board has the authority to resolve marijuana policy divergence within its regional banks by making clear where it stands on banks servicing marijuana related businesses’ access to the payment system. The question now is when and how will the board weigh in? Until then, states may find that even if they legalize marijuana, their regional Fed may stand in the way.

This blog post has been updated to clarify that David Thomas did not say the 105 financial institutions were in the SF-Fed’s district.

1 U.S. Const. art. VI, cl. 2 (“This Constitution, and the Laws of the United States ? shall be the supreme Law of the Land; and the Judges in every State shall be bound thereby, any Thing in the Constitution or Laws of any State to the Contrary notwithstanding.”).

The Future of Global Insurance Regulation