Last week, we provided a broad overview of how sequestration would apply to the major categories of federal spending in fiscal year (FY) 2013: defense discretionary, non-defense discretionary, and non-defense (or “domestic”) mandatory.* Mandatory spending is composed of programs that are funded by formulas set in law and thus do not require an annual appropriations bill to continue. This type of spending can be loosely separated into two categories: Social Security and the health care entitlements (e.g., Medicare, Medicaid and the Patient Protection and Affordable Care Act (PPACA)); and everything else, sometimes known as “other mandatory spending.” The major entitlements are familiar topics, but even policy wonks may be at a loss when the topic of other mandatory spending arises. 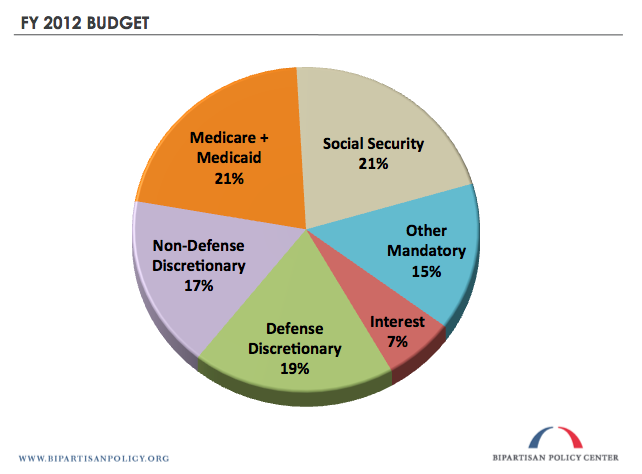 Most Mandatory Spending is Exempt

While the budget contains hundreds of mandatory programs ? many of which are subject to the sequester’s reductions ? the majority of the large ones are protected from the cuts. Social Security and Medicaid are completely exempt from sequestration, as are many programs in the other mandatory category, such as veterans’ benefits and food stamps. Mandatory spending also includes the refundable portion of certain tax credits, such as the child tax credit, the Earned Income Tax Credit, and PPACA exchange subsidies that begin in 2014. These refundable tax credits for individuals and families are also fully exempt from sequestration.

In contrast, some mandatory programs are partially-exempt. Sequestration cuts to Medicare providers and plans (including Part D prescription drug coverage and Medicare Advantage) are limited to 2 percent. Mandatory funding for the Indian Health Service (IHS) is also protected by the 2-percent limit, but most of the funding for IHS is discretionary and is not exempt from cuts. 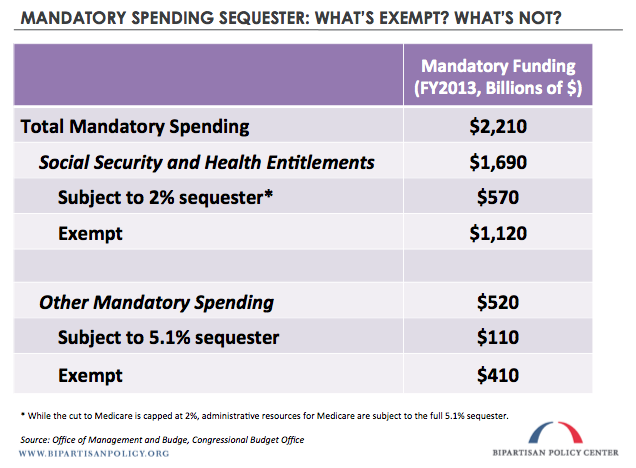 What “Other Mandatory Spending” Is Subject to Sequestration?

Some of the largest sequestration cuts to other mandatory spending programs are: 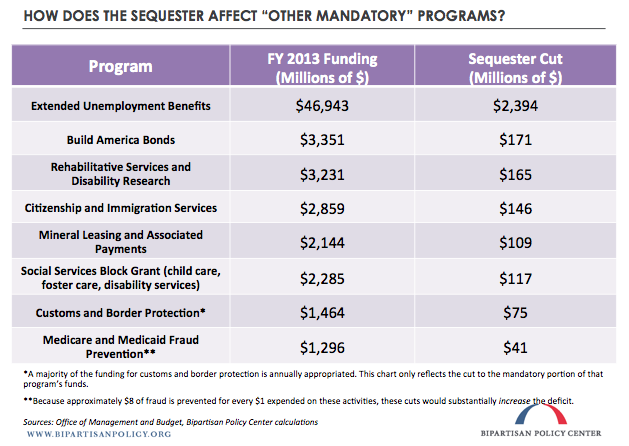 Those listed above are just a small sample of the other mandatory spending programs that are subject to sequestration. Other programs affected include payments to the Transportation Trust Fund ($316 million cut),** trade adjustment allowances for displaced workers ($58 million cut), grants from the Prevention and Public Health Fund created by PPACA ($51 million cut), and compensation for victims of the September 11 terrorist attacks ($16 million cut). In some cases, a major mandatory program (such as food stamps) is exempt, but mandatory administrative costs to support the program are subject to sequestration (a $5 million cut in the case of food stamps).

Additionally, most credit programs are subject to sequestration, but the direct impact, if any, on actual federal spending is dependent on the usage of the credit. For example, the Farm Service Agency’s Commodity Credit Corporation Fund’s $6.46 billion in borrowing authority for FY 2013 is scheduled to be cut by $329 million. The reduced borrowing authority might impact the Agency’s ability to make new commodity support loans, but the need to make those loans will be dependent on commodity market prices.

Another example in this category is the Federal Deposit Insurance Corporation’s (FDIC) Orderly Liquidation Fund. This fund, created in the Dodd-Frank Act only comes into use if there is a failure of a systemically-important financial institution that could not be addressed through other means. If this authority is not invoked by the FDIC in FY 2013, then sequestration will have no practical effect.

If the sequester remains in effect, there will be little flexibility in the cuts to other mandatory spending, and the programs will face across-the-board cuts in each of the upcoming nine years of sequestration (through FY 2021). The recipients, whether states, localities, businesses, or individuals, will acutely feel these cutbacks in funding.

* Defense spending also contains some mandatory programs that are not annually appropriated. They make up a relatively small portion of the federal budget and nearly all of them are exempt from the sequester, so this post focuses solely on non-defense mandatory spending.

** Trust funds for transportation have historically been funded largely by user fees (such as taxes on gasoline and diesel fuel) and used to provide matching funds to states for highway and transit projects. User fees deposited into trust funds are exempt from sequestration; general fund transfers, however are subject to reductions. Because motor fuel taxes have not kept pace with the level of transportation spending that Congress has authorized, the trust funds have become more reliant on general funds. This cut will primarily reduce the funds available for the Department of Transportation to commit to future highway and transit projects (although some annually appropriated general fund monies for projects already underway may be sequestered, as well).

10252
10253
10254
If the sequester remains in effect, there will be little flexibility in the cuts to other mandatory spending