Today, Congress officially missed the deadline to adopt a budget resolution. Disappointing as it may be, this is hardly the first time lawmakers have failed to adhere to the formal budget process required by the Congressional Budget and Impoundment Control Act of 1974.

According to the 1974 law, which established the modern budget process, lawmakers are required to adopt a concurrent resolution that sets overall tax and spending levels no later than April 15. This resolution provides the framework under which congressional committees appropriate funds for the next fiscal year. Importantly, a budget resolution can also include reconciliation instructions, which allow the Senate to consider certain budgetary measures without the threat of a filibuster.

Unfortunately, lawmakers have a poor track record of adhering to their self-imposed timetable. Since the implementation of the 1974 law, lawmakers have only met their April 15 deadline in 6 out of 41 years?only about 15 percent of the time.

Not only is Congress frequently late in adopting a budget; in some years, it forgoes the process altogether?and the trend is getting worse. Prior to 2000, lawmakers passed a budget resolution at some point in every year but one (1998). Since then, they have failed to adopt a budget in seven of the last 15 years?nearly half the time? including five consecutive years between 2010 and 2014. 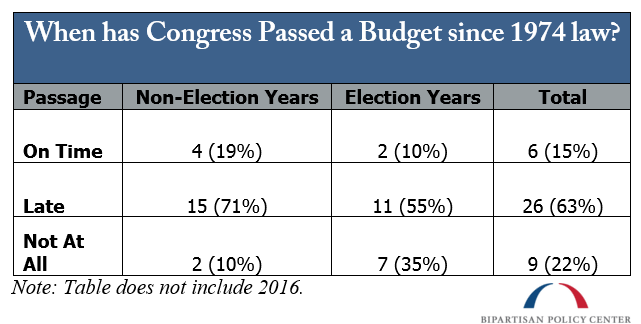 It is notable that lawmakers seem to have particular trouble passing budget resolutions in election years (such as 2016), with a failure rate more than three times as high as that of off-years. Among many possible reforms to improve the budget process, some lawmakers have proposed switching to biennial budgeting. Under a biennial budgeting process, each Congress would only be required to pass one budget resolution (which would span two years) and would no longer have to struggle through the process of passing an election-year budget.

Recent history suggests lawmakers could prove more successful using such a system. While not actually being budget resolutions, the Bipartisan Budget Acts of 2013 and 2015 set two-year spending levels agreed to by both parties. If lawmakers agree to such spending targets and appropriate funds accordingly during their first year, they will be freed to focus on other issues during the following election year in which compromise may prove more challenging. There is simply no need to renegotiate these levels once they have been established.

Such process reforms are of course no substitute for substantive action addressing our nation’s long-term fiscal challenges, but deadlines such as today’s have been missed far too frequently. Today’s failure is just another reminder of the need for lawmakers to either comply with the existing process or develop one they can actually stick to.

Want to try your hand at crafting a budget? Check out the Federal Balancing Act Interactive Budget Simulator developed by the Bipartisan Policy Center and Engaged Public.