U.S. homebuilding is short on help. The construction industry is facing a severe labor shortage that is hampering growth and putting upward pressure on costs. According to The Wall Street Journal, 83 percent of construction firms reported difficulties filling positions last year. Since the middle of 2013, the percent change in construction openings has outpaced construction hiring, according to Labor Department data compiled by WSJ.

This shortage is in part due to declining immigration. Findings from a report by John Burns Real Estate Consulting Inc. indicate that there are 570,000 fewer Mexican construction workers in the United States today than there were in 2007; these workers are unlikely to return, says the report, due to increased border patrols, accelerated court-ordered deportations and burgeoning economic opportunities in Mexico.

Immigrants are key components of both housing supply and demand. The Bipartisan Policy Center’s (BPC) 2014 report, Immigration and Housing: Supply, Demand, and Characteristics, noted that immigrants make up more than a quarter of the housing construction workforce, and drive more than a third of the growth in new housing demand. 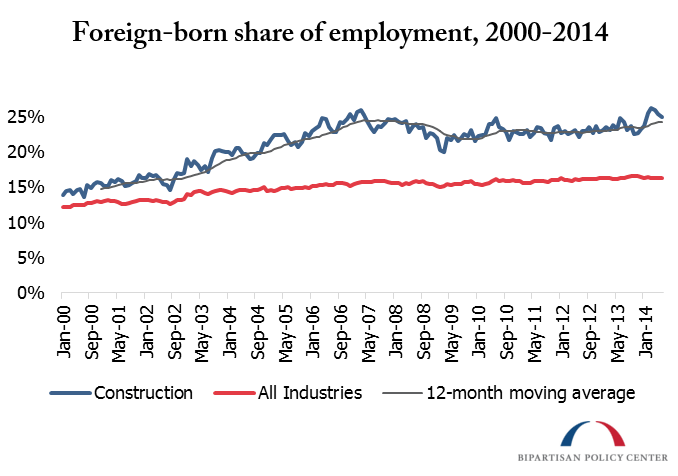 As we noted in our previous blog post, immigration works to plug labor gaps and complement the native-born labor force. Construction is the most popular industry for immigrant workers, constituting 9 percent of total foreign-born employment?compared to just 4.5 percent for native-born workers. As such, these labor shortages will likely continue to threaten the industry, especially in the context of declining labor force participation among native-born workers?which means that many of these positions will likely remain unfilled.

“These developments provide further evidence of the need for immigration reform,” said Theresa Brown, BPC’s director of immigration policy. “Immigration has historically given the United States a demographic edge, fueling economic expansion and compensating for our aging population. Housing is an important component of the economy and its lag in recovery is slowing the overall return to strong growth. The importance of immigration to this segment in particular should emphasize the need for reform.”