The House Appropriations Committee last week approved the Fiscal Year 2016 Department of Homeland Security (DHS) appropriations bill on a vote of 32-17, about a month after its Senate counterpart approved its own bill. The Republican-led House and Senate committees approved $39.3 and $40.2 billion, respectively, in funding for DHS, both of which fall about $1 to $2 billion below President Obama’s request.1 While the Senate committee passed a relatively clean bill with a bipartisan vote of 26-4, the House spending bill adopted language targeting the administration’s November 2014 executive actions and so-called “sanctuary cities.”

Below is a summary of some of the key provisions from both appropriations bills and their corresponding committee reports.

After an extended debate on the President’s executive actions on immigration, which pushed final passage of FY2015 funding into February of this year, the House appropriations bill again included a general provision barring the use of funds to carry out the expansion of the Deferred Action for Childhood Arrivals (DACA) or the new Deferred Action for Parents of Americans and Lawful Permanent Residents (DAPA). However, unlike the more strict attempts during the FY2015 debate to prevent DAPA and DACA expansion, the language in the FY2016 bill prohibits the use of any funds while the injunction order of the district court in Texas remains in effect. The language is mostly symbolic as United States Citizenship and Immigration Services (USCIS)?the agency primarily responsible for carrying out Obama’s deferred action programs?has already halted the implementation of the new programs while the executive action court case plays out in the courts.

Sanctuary Cities: Prompted by the controversy over the murder of Kathryn Steinle by an unauthorized immigrant released from custody in San Francisco, the House Appropriations Committee took up and passed language cutting federal funding for states and localities considered “sanctuary” states or cities.2 Representative Kevin Yoder (R-KS) introduced an amendment, which was adopted on a vote of 28-21, that would block states or local jurisdictions from receiving any Federal Emergency Management Agency (FEMA) funds from its state and local grant programs for at least one year until DHS can certify is it no longer a sanctuary city. FEMA’s state and local programs provide up to $1.5 billion in funding through several security and preparedness grants and initiatives.3 The amendment would also require DHS to report to Congress no later than March 1 of each year which states or localities are considered sanctuary states or cities. A second amendment introduced by Rep. David Young (R-IA) and ultimately adopted on a voice vote would withhold $5 million in funding from Immigration and Customs Enforcement (ICE) until it briefs the committee on its efforts to increase the number of localities that participate in the Priority Enforcement Program (PEP).4

Alien Release and Prosecutorial Discretion: Both committees expressed frustration with the lack of transparency and ICE’s inability to provide “basic” enforcement data on the release of criminal aliens each year, citing 34,000 releases from custody in 2013 and 30,000 in 2014 “without a labor-intensive manual review of each file.”5 The House report pointed to a DHS Office of Inspector General (OIG) report released in May that found that DHS does not collect and analyze data on the use of prosecutorial discretion to fully assess its current activities and future policy and raised concerns that ICE was releasing tens of thousands of immigrants from its custody after determining that they are not “enforcement priorities.” Both committees called on DHS to develop and implement metrics to measure the effectiveness of ICE’s law enforcement activities and a plan to report on “each step of the immigration enforcement and criminal justice lifecycles, including how and why aliens are encountered by law enforcement, and what decisions are made regarding their processing, including all of the factors considered when decisions are made regarding disposition.”6

During the full committee markup in the House, Rep. John Culberson (R-TX) also introduced an amendment that prohibits the release of Priority 1 or Priority 2 immigrants detained by DHS. ICE defines Priority 1 as aliens who pose a danger to national security or public safety, including convicted felons, gang members and illegal entrants apprehended at the border; Priority 2 consists of persons convicted of significant or multiple misdemeanors, as well as individuals who entered or reentered this country unlawfully after January 1, 2014.7 Committee Democrats objected to the amendment because it limits ICE’s discretion and would possibly require the detention of unaccompanied minors arriving at the southern border. The amendment was ultimately adopted by a voice vote.

Detention: Under the “detention bed mandate,” current law requires the government to fill a minimum of 34,000 beds in immigrant detention centers per night. While the Obama administration has in the past signaled its desire to discontinue the mandate, both the House and Senate appropriations committees showed no signs of repealing it, approving funding again for at least 34,000 detention beds in their FY2016 bills. The House report specifies that it approved $1.7 billion within its ICE funding total to maintain an average of 34,040 daily detention beds, including 31,280 adult beds and 2,760 family beds. The Senate committee report also expressed concern that ICE had maintained an average daily population that was nearly 10,000 beds fewer than the level funded by Congress, and encouraged ICE to “vigorously enforce all immigration laws under its purview” going forward.8

Alternatives to Detention: One particular area where the Senate and House committees differ on funding levels is the Alternative to Detention (ATD) program, which places low-risk aliens under electronic monitoring or supervision instead of detention. The president’s budget requested about $122 million, which is $12 million above the FY2015 enacted levels and would raise ATD capacity to an estimated 53,000 individuals per day. While the Senate bill approved the requested amount, the House bill did not, recommending $109.7 million, which is equal to the amount provided in FY2015. The House committee report stated that it was recommending funds below the requested amount because with an average daily participation rate of 25,700, including 7,200 family units, ICE was not fully using the FY2015 available funds, which itself was an $18 million increase for the program from FY2014.9

Criminal Aliens The Senate committee expressed concern that while funding for ICE’s Enforcement and Removal Operations (ERO) has steadily increased in the past years, the total of criminal removals has decreased, from nearly 217,000 in 2013 to 178,000 in 2014.10 Both bills approved requested funds for additional legal and investigative capacity. The House bill approved $231 million for legal proceedings, nearly $14 million above the amount provided in FY2015, which includes funding for the agency’s request to hire 311 additional attorneys to reduce the backlog on the detained and non-detained dockets in federal immigration courts.11 The Senate bill seems to only provide additional funding for up to 150 new attorneys, about half of the requested amount. To support additional investigative capacity, the bills would increase funding for the agency’s Homeland Security Investigations (HSI) from FY2015 levels to target criminal aliens, visa overstayers and human trafficking.

E-Verify: The Senate and House bills approved the requested $120 million to fund E-Verify. The committees noted that incredible growth of the program?from fewer than 25,000 users in 2007 to more than 526,000 as of April 2015?and the efforts to improve its accuracy. The committees expressed support for DHS efforts to expand and improve the program but called for additional improvements to reduce the number of erroneous determinations of ineligibility.

Visa Overstays: Both committees expressed frustration with DHS’s delay in reporting on the number of visa overstays in the country?an effort that was most recently undertaken in 2012. The House Committee report directs ICE to submit the report to the Committee no later than 30 days after the bill’s enactment. Going even further, the Senate report withholds $13 million from the Office of the Secretary and Executive Management until the report has been submitted. It also provides an additional $10 million to fund an ICE initiative to increase overstay enforcement efforts and expects DHS to report annually on overstay numbers. 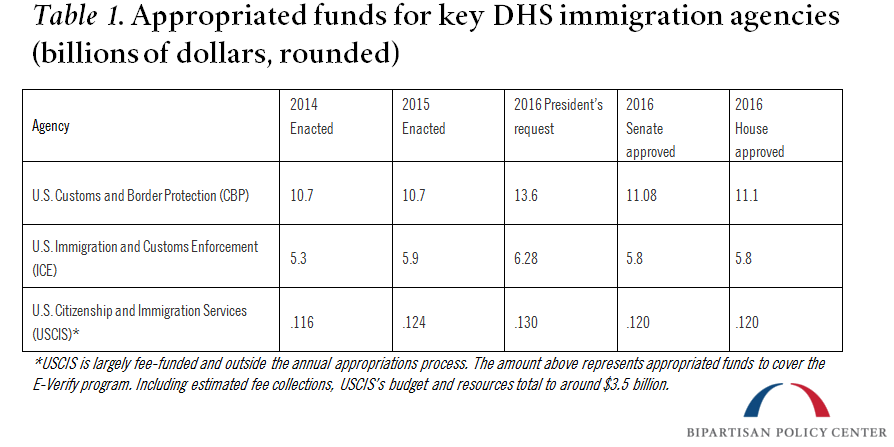 Personnel: Both appropriation bills provide about $11.1 billion in funding for Customs and Border Protection (CBP), an increase of about $400 million above FY 2015 levels. The funding levels provide support for no less than 21,370 Border Patrol agents and 23,775 CBP officers?same level funded in FY2015. Both committees expressed concern about CBP’s inability to hire and retain enough full time employees to meet the funded staffing levels, pointing out that CBP expects to end the current fiscal year 1,820 FTEs short of funded levels. The House committee directs CBP to “complete a root cause analysis and develop a corrective action plan” to address its hiring and retention challenges.12

Air and marine operations: Both the Senate and House bills funded air and marine operations above the requested level ($747 million) to increase situational awareness along the land borders and maritime environment. The increased resources include funding for the procurement of additional mobile surveillance systems and situational awareness technology like aircraft sensors, new enforcement planes, and about $8 million for additional pilots, crew, and training necessary to increase unmanned aerial systems (UAS) flight hours.

Metrics: The committees also placed emphasis on the need for DHS to develop and consistently report metrics that measure border security outcomes. The House committee report stated that current metrics are not sufficient to provide a complete picture of border security, and directed DHS to continue working with the Office of Policy to develop better metrics, adding that “Until CBP can more accurately measure inflow rates of illicit border crossers and contraband between ports of entry, at ports of entry, and in the maritime domain, Congress and the public will continue to be wary about claims of progress in the border security mission.”13

The Senate took a much more comprehensive approach, directing DHS to improve its reporting on several specific measures of unauthorized migration, including: annual estimates of the size of the unauthorized population in the country; the number of unauthorized entries each year; estimates of the number of new visa overstays; and the number of unauthorized immigrants estimated to have been removed, departed on their own accord, and died each year.14 Echoing the key findings of a recent BPC’s report, Measuring the Metrics: Grading the Government on Immigration Enforcement, the committee report adds, “The Committee strongly believes that the public discourse on immigration would benefit from regular, consistent, reliable reporting of border and immigration operations. However, the facts are not available or agencies fail to consistently, regularly report them using the same definitions over time, across the Department, and in a timely manner.”

Application backlogs and digital transition: The Senate committee directed USCIS to submit a comprehensive report by July 31 on each of its service centers’ operations and backlogs by visa type. It also asked for cost estimates related to an increase in hiring capacity in order to meet projected demand.15 The House bill also directed USCIS to use $29 million in fee revenue to go toward the continuing conversion of immigration records from paper-based to digital format.16

U visa: The bills rejected the president’s request to increase the statutory cap on U-1 nonimmigrant visas for crime victims from 10,000 to 20,000 visas per year. The current cap of 10,000 visas has been reached in six straight fiscal years. Because caps are set in statute, the Senate Appropriations Committee cited its lack of jurisdiction in approving an increase, and referred USCIS to the Senate Judiciary Committee regarding the proposed policy change. They also pointed out that such a change would increase spending and requested that USCIS find offsets if submitting the same request for FY2017.17

2
The Senate Committee on Appropriations marked up its DHS bill before the murder of Kathryn Steinle, so there were no actions on behalf of any committee members to include similar language.