We have a retirement savings crisis in the United States. Using the Federal Reserve’s Survey of Consumer Finances, Boston College’s Center for Retirement Research calculates the retirement savings gap to be $6.6 trillion*. The bottom line is quite simple: individuals are not saving enough for retirement.

This has several straightforward, but important, implications. If retirees have inadequate savings, they will be overly dependent on the federal government’s entitlement programs, which already have troubling financial outlooks and are intended to serve as supplements to ? not replacements for ? private savings. For many seniors, this set of circumstances results in a low level of consumption and a poor standard of living in retirement. The good news is that this crisis can be addressed with targeted reforms. 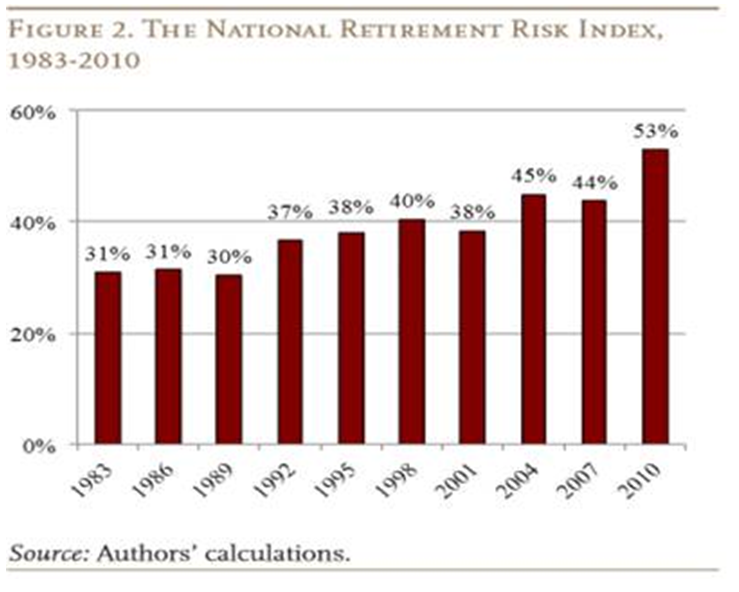 This figure shows the percentage of Americans who are at risk for not being able to maintain their standard of living during retirement years, according to a recent study at Boston College.

Last Friday, the AARP and the U.S. Chamber of Commerce joined together (which, some remarked, was a truly special occasion) to host and cosponsor “Rethinking Retirement,” a conference focused on addressing the underlying causes hindering retirement savings accumulation. The speakers identified ways to increase savings rates among individuals who currently have accounts, as well as proposals to attract new individuals to enroll.

Top executives from both of the events’ sponsors opened the proceedings. Randy Johnson, Senior Vice President at the Chamber of Commerce, underscored the crucial role that employers play in personal savings, citing over 670,000 defined contribution plans covering over 48 million employees. Debra Whitman, Executive Vice President at AARP, then discussed the plight facing scores of retirees who save insufficiently, referencing that 40 percent of individuals aged 45-64 have no retirement savings. Despite the wide-ranging perspectives and backgrounds of the event’s participants, Johnson, Whitman, and the panelists displayed widespread agreement regarding the problems and many of the possible solutions for increasing retirement savings in America.

Bob Reynolds, President and CEO of Putnam Investments, set the tone in his keynote speech by emphasizing that the framework of the current system ?increasingly dominated by defined contribution plans ? is not significantly flawed. In fact, he stressed that the system is enormously successful at providing income security in retirement for those able to both access and properly utilize it. Rather than overhauling the system’s structure, he presented two objectives for meaningful reform: increasing access to retirement plans and optimizing plan utilization for individuals who save.

Reynolds outlined some approaches to improve the personal savings landscape in the U.S. His first proposal can be best summarized using his own words: “Let’s go full auto!” He called for widespread use of the best practices outlined in the Pension Protection Act of 2006, including auto-enrollment (which establishes an opt-out system for employees who do not want to participate as opposed to an opt-in requirement for those who do), auto-escalation of contributions, and default investment in target date funds. Strong evidence shows that all of these plan features increase participation, raise contributions (which Reynolds suggested should average upwards of 10 percent of income), and result in balanced retirement portfolios.

Second, with an eye towards increasing plan availability, Reynolds supported universal access to employer-sponsored retirement plans for all workers. Two specific ways that he suggested to achieve this goal are promoting auto-IRAs (individual retirement accounts) and simplifying 401(k) operation to lessen the administrative burden facing small businesses. Auto-IRAs would automatically deposit income directly into a personal account set up for each employee, ideally utilizing employers’ existing income deferral systems (currently used to deduct Social Security and Medicare payroll taxes). These accounts are especially beneficial because they have the savings accumulation benefits associated with auto-enrollment plans and also both operate at no cost to employers and require very little effort to maintain. Automatic IRAs, like Traditional IRAs, are not controlled by employers (and by law they are not allowed to offer contributions) and operate solely between the custodian of the account and the employee, thus shifting the expensive and time-consuming administrative burden away from employers to investment firms. These plans would be especially attractive to small businesses that generally do not have the time or money to offer and operate employer-controlled plans.

Additionally, similar shifts of fiduciary responsibility from employer sponsors to investment firms could help simplify operations for those businesses that do choose to operate a 401(k)-type plan. Currently, employers who operate these plans must ensure that they comply with federal regulations (which often involves hiring an accountant), must issue regular account statements to plan participants, and are generally expected (though not required) to offer some kind of matching contribution. Addressing some of these issues would simplify the burden facing businesses and increase offerings of plans.

The three panels that followed Reynolds discussed a range of topics, but all arrived at a similar consensus. The first presenters examined challenges facing specific groups ? African Americans, Hispanics, and women ? that are most at risk of having inadequate savings. The biggest obstacle facing these groups is access to employer-sponsored plans, stemming from the fact that these demographic cohorts are more likely than others to have lower levels of income, work part-time, or experience interrupted employment. The speakers agreed that more should be done to encourage universal offering of retirement options, and all three noted that when employer plans were in place and contained auto-enrollment features, the disparity in participation rates between the different demographic groups disappeared.

The latter panels consisted primarily of investment firm and small business representatives and explored possible plan improvements. All agreed that default contribution rates are currently too low to promote optimal savings accumulation, and also on the need for greater access for employees. Their main recommendation involved increasing the prevalence of multi-employer plans, generally shared among a group of smaller businesses. This would decrease administrative burdens, defray costs, and increase purchasing power relative to individual small businesses, all of which would increase the availability of employer-sponsored plans.

The diagnosis of the problem is not in question. Americans are not saving sufficiently for retirement, and the trend is moving in the wrong direction. As baby boomers continue to retire, this crisis will only become more pressing. Reforms are needed to improve both the quality and the number of retirement plans available, and to increase the participation of employees and the amounts that they contribute. Demonstrated by the coalition behind last week’s event, these changes can be beneficial for both businesses and retirees nationwide. It’s time to get started.

13810
13811
Americans are not saving sufficiently for retirement, and the trend is moving in the wrong direction