We asked academic experts, political scientists, historians, pollsters and policy analysts to contribute to an expert forum on this subject. The opinions reflect some differences in the academic community about how much and in what ways America is divided.

If you would like to contribute commentary to the expert forum, please send an email to [email protected]

Americans who blame Washington politicians for the polarization and gridlock of the nation’s politics might want to look in the mirror: Like the elected officials they decry, voters tend to automatically retreat into partisan camps even when they disagree with the party line on policy.

A USA TODAY/Bipartisan Policy Center Poll shows that the officials who have been unable to avert the automatic spending cuts known as sequestration ? the current debate centers more on who’s to blame for them ? in some ways reflect constituents who view the opposition party as deeply untrustworthy and its positions extreme. Though most Republican and Democratic voters say American politics are more polarized than the American people are, the findings indicate that on that they’re wrong.

Gallup recently pointed out that the difference between Democrats and Republicans in their approval of President Obama in his fourth year was 76 percentage points. In Bush’s fourth year, it was also 76 points. Gallup wrote that “it appears that highly polarized ratings are becoming the norm, as Americans aligned with both parties are apparently not looking much beyond the president’s party affiliation to evaluate the job he is doing.” Pew asked people in December whether the country was more divided politically than in the past and 80% said it was. Last year another pollster who looked at widely divergent Democratic and Republican perceptions of the economy’s health suggested that perhaps partisans were living on different planets. 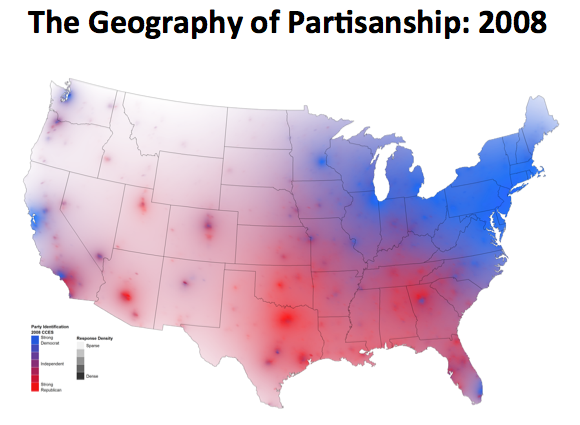 Created by Professor Morris Fiorina of Stanford University and derived from 2008 Cooperative Congressional Election Study (CCES) data, the visualization above is a geographic representation of party self-identification. The map makes clear that Americans have sorted themselves by political party. Those who self-identify as Democrats live in densely populated areas in a few specific locations; self-identified Republicans tend to live in more rural areas spread across a wider geography.


What Separates the Public from Party Leaders and Partisan Activists

When discussing political polarization it is always a good idea to get clear about what we mean by the term “polarization.” The broad term can mean different things. One crucial dimension is the difference between elites and the mass public. Polarization in Congress and national politics is deep, making compromise very difficult. Polarization among the public however, is another matter entirely.


The Polarization Problem is Bigger than It Seems, and So is the Solution

The polarized American political system of today is only part of a larger story. Since the mid-1960’s, the country as a whole has become more divided, economically, politically, socially and culturally. A few examples should suffice to make that clear. First, income and wealth distribution have become more polarized since then. Second, the gap between the Democrats and the Republicans on fundamental issues has widened, too. Third, social-cultural gaps have widened in many areas, from patterns of family formation to attitudes toward religion and even popular entertainment. All of these developments are related, and they have become mutually reinforcing.