The recent interim deal with Iran has been variously described as “halting,” “freezing” and even “rolling back” Iran’s nuclear program. These terms, however, are a mischaracterization. Not only does Iran continue to accumulate enriched uranium under the interim deal, but it is actually possible for Iran to progress closer to an undetectable nuclear weapons capability without violating the terms of the agreement. Slowing the acceleration of most, but not all, aspects of Iran’s progress towards nuclear capability would be a more accurate characterization of the deal struck in Geneva.

Iran already has all the technology and materials to produce enough weapons-grade uranium for a nuclear bomb?about 20 kilograms of uranium enriched above 90 percent, known as highly-enriched uranium (HEU). But if Iran had tried to do so before signing this deal, it would have needed about two months to complete the work. Before it could finish, however, inspectors for the International Atomic Energy Agency (IAEA), who visit Iran’s nuclear facilities at least every two weeks, if not more often, would have noticed what the Iranians were doing and allowed the United States and its allies to intervene.

The time Iran would need to produce 20 kilograms of HEU?often referred to as its breakout timing?has been steadily dropping as Iran has advanced its nuclear weapons program. In fact, most analysts expected that by mid-2014 Iran would have achieved an undetectable nuclear weapons capability?the ability to breakout in less than a month, faster than it could practically be detected and stopped. (More on why this capability is significant, and tantamount to having a nuclear weapon, here.) 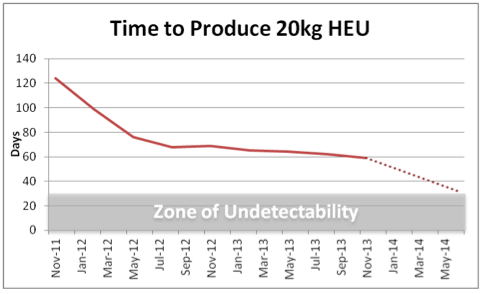 Nuclear progress is measured across multiple variables, each of which contributes to how quickly HEU can be produced. The interim deal effectively halts Iran’s advancement in some areas, by eliminating its stockpile of 20% enriched uranium and preventing it from operating more centrifuges than it is currently using. It also increases the rate of inspections at Iran’s known nuclear facilities, effectively shrinking the window for an undetectable breakout. The result is that, if Iran abides by the terms of the deal it is unlikely to be able to sprint for a nuclear weapon for the next six months without being caught.

But the deal does not close off all the means by which Iran could advance its nuclear program. Most notably, it would allow for Iran to continue tuning the performance of its existing centrifuges, boosting their output. In this way, even under this interim deal, Iran could keep accelerating its program. Thus, on day 181, if the terms of this deal lapse without being replaced by a final agreement, Iran could be in a better position, able to produce enough fissile material for a weapon faster than ever before.

To understand how this might be the case, it is important to understand the three main drivers of breakout timing.

The closer that Iran’s stockpile is to 90 percent enrichment, the less time it will need to get all the way there. In fact, enriching to 20 percent actually consumes about four-fifths of the time and effort needed to get to 90 percent. Building its stockpile of this material is, therefore, one of the fastest ways Iran could accelerate its nuclear timeline.

For a while, this was the strategy Iran pursued. But in 2012, Israeli Prime Minister Benjamin Netanyahu, in a speech before the United Nations General Assembly, drew a red line at Iran’s accumulation of a weapons worth?about 155 kilograms?of 20 percent enriched uranium. Since then, Iran has been careful not to cross that threshold. Though it has continued to enrich to that level, it has converted most of what it has produced into uranium oxide, a material used for reactor fuel, rather than keeping it in the form of uranium hexafluoride, which is used for enrichment. Although uranium oxide can be easily reconverted back into uranium hexafluoride and thus enriched further, the reconversion process introduces another step, and therefore more time, into a breakout.

Thus, Iran’s stockpile has grown slowly. Over the past year, Iran has produced about 110 kilograms of 20 percent enriched uranium, but its stockpile only grew by about 40 kilograms. The remainder was converted into uranium oxide. If Iran had not done that, if it had added those 70 kilograms to its stockpile, it would have reduced its breakout timing by almost three weeks. 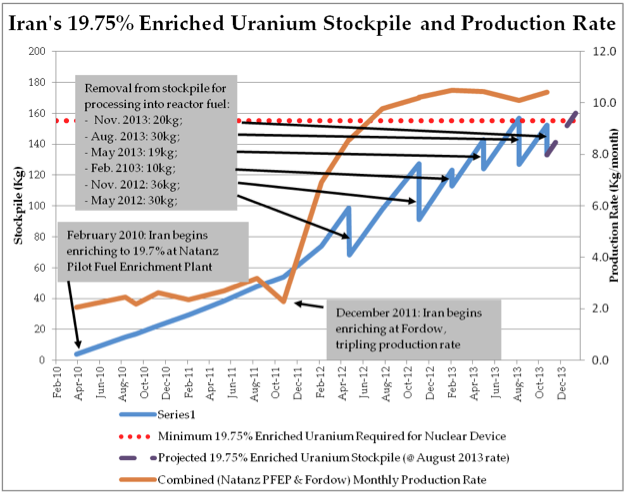 Because breakout ability grows together with Iran’s stockpile of 20 percent enriched uranium, the interim deal not only prohibits Iran from producing any more but also requires Iran to get rid of its existing stockpile. Half of the 133 kilograms Iran currently possesses is to be converted into uranium oxide for reactor fuel; the other half will be diluted back to 3.5 percent enrichment level.

This measure very effectively slows Iran’s breakout ability. Because Iran now would have to rebuild its 20 percent enriched stockpile en route to HEU, it would require closer to three months to produces enough fissile material for a weapon. The deal thus immediately adds a month to Iran’s clock. 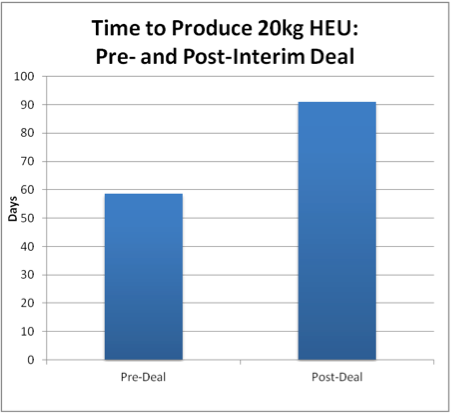 This was the strategy Iran switched to once the Israeli redline limited its stockpile of 20 percent enriched uranium. In the last two years, Iran has installed close to 11,000 new centrifuges at its Natanz and Fordow facilities. Of those, more than half have been installed in the last year. 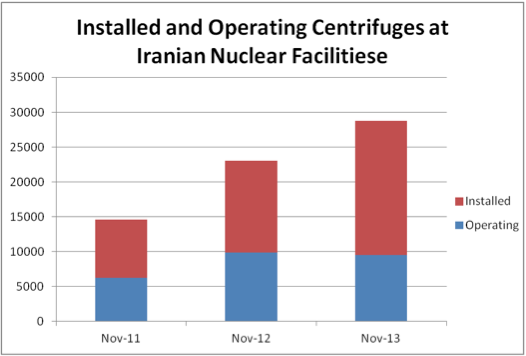 Few of these new machines, however, were ever actually switched on. The result has been that Iran accumulated a significant latent capability. While Iran would need two months to breakout using just the centrifuges that it is currently operating, that time would be halved if it turned on all of the centrifuges it has installed. Indeed, flipping the switch on its existing centrifuges is perhaps the single quickest way for Iran to speed up its nuclear program. 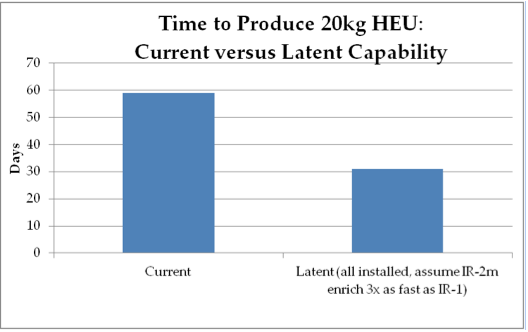 The interim deal, however, also limits this form of nuclear progress. It specifically prohibits Iran from turning on any of its centrifuges that are not already operating or installing any new centrifuges, while allowing it to continue enriching in those it is already using. The deal also stops short of requiring these additional centrifuges to be dismantled or removed.

During the duration of the deal, then, Iran cannot speed up its program by installing or turning on more centrifuges, without violating the terms of the agreement. But, since it isn’t required to roll back this part of its program in any way, that latent capability will always be available to it, whenever it makes the decision to use it. 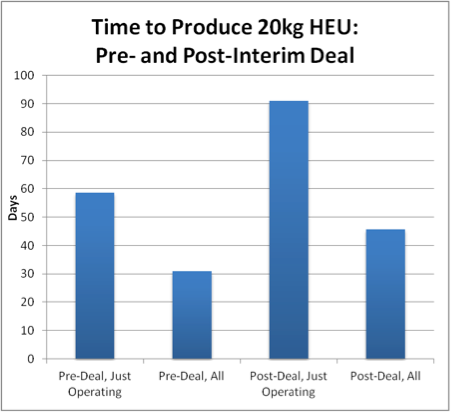 The third factor that determines breakout timing is the output of each individual centrifuge. Much like car engines of similar sizes are able to produce different amounts of horsepower depending on how they are tuned, facilities operating the same number of centrifuges can enrich at different rates. The design, build quality, and operation of centrifuges can affect the speed at which they are able to enrich uranium. Iran has sought to accelerate its nuclear program by both building new types of centrifuges and trying to squeeze as much enrichment as possible out of its older models.

In 2013, Iran began installing next-generation centrifuges, referred to as the IR-2m model, at the Natanz enrichment plant. The technical specifications for these machines suggest that they could enrich uranium up to five times as quickly as the IR-1 model that Iran is currently using. By August 2013, Iran had installed 1,004 of these machines, but had yet to begun using them. The interim deal prohibits Iran from turning them on. But it does not prohibit Iran from experimenting with these, or other advanced centrifuges, in its Research and Design facility. Without violating the terms of the agreement, therefore, Iran can master new centrifuge technology and position itself to operationalize its existing IR-2m centrifuges.

But there is also nothing in the deal that would prohibit Iran from improving the performance of its existing IR-1 centrifuges. It is still allowed to operate more than 9,000 (8,840 at Natanz; 696 at Fordow) to produce 3.5 percent enriched uranium. These centrifuges are currently enriching at far below what is generally believed to be their maximum achievable output.

Centrifuge output is measured in Separative Work Units (SWU) per machine per year. Expert estimates of the maximum output of the IR-1 centrifuge, which is based on Pakistani designs, vary. But a review of the literature on the subject, finds that most estimates range between one and two SWU/machine/year, with the most likely range closer to one to one-and-a-half. Currently, however, Iran is able to achieve only .76 SWU/machine/year, or only between 35 and 50 percent of its maximum output.

Even this number, however, is significantly higher than the past performance of Iran’s IR-1 centrifuges. Indeed, Iran has shown in the past that it is capable of improving the performance of its centrifuges and has already operated the IR-1 at higher output levels than it is currently achieving.

At the beginning of 2009, Iran was only able to average roughly 0.5 SWU/machine/year. By 2010, it managed to increase output above 0.9 SWU/machine/year, even crossing the 1 SWU threshold for a brief period. But for the next year and a half, in the wake of the Stuxnet cyber attack, Iran struggled. Its average output fell to 0.6 SWU/machine/year. Since mid-2012, however, it has been able to achieve reliably 0.75 SWU/machine/year. 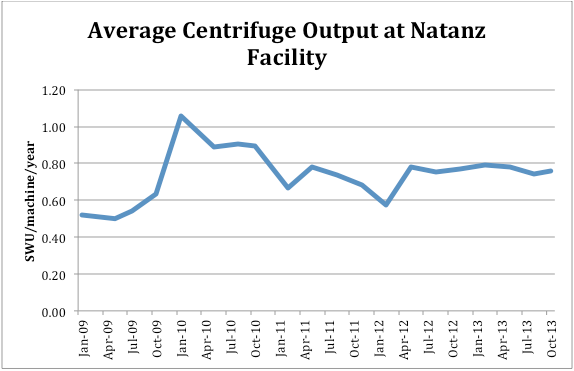 A footnote in that deal explicitly permits Iran to replace existing centrifuges with new machines of the same model. Such installation of new machines is perhaps the best way to raise enrichment output. By focusing its energies on once again boosting its centrifuge output to 1 SWU/machine/year?as it already has demonstrated it can do?or above, Iran will be able to significantly diminish its breakout timing within the constraints of the interim agreement. This would have the effect of diminishing Iran’s breakout timing by 20 to 45 percent. 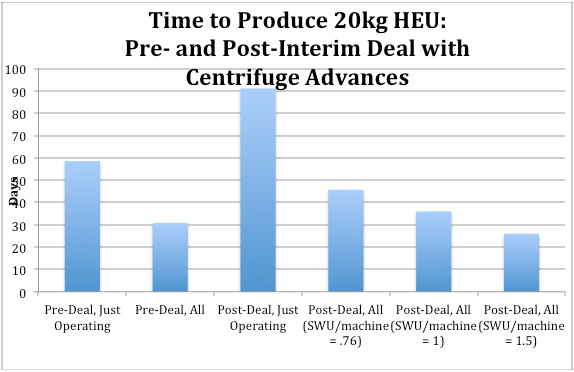 It is entirely possible, therefore, that at the end of the 180-day period of this interim deal, Iran will emerge with the ability to breakout faster than it could before the deal took hold.

The IAEA and the Interim Deal: Funding Challenges

Conditional Sanctions and Repeal Authority: A Mechanism for Legislative-Executive Cooperation on Negotiations with Iran