As economist Paul Romer jointly accepts the prestigious Nobel Prize in economics for his groundbreaking model of economic growth, policymakers should view his research showing the economic importance of higher education as a wake-up call to promote access, affordability, and innovation in America’s colleges and universities.

The key insight to Romer’s work is that new ideas are different from most goods in that ideas are non-rivalrous. Invent a better car engine, for example, and every other car producer could use and build on your idea to improve their own engines. In contrast, invest in more car-making equipment and that machine can only go in one factory at a time. Because of non-rivalry, one extra idea has the potential to improve the economy much more than one extra machine or worker. In Romer’s model this makes ideas the key to long-run economic growth.

Non-rivalry can have a downside, however-if every other producer adopts your new engine, then why invent it in the first place?  Romer’s work suggests that free markets will underprovide new inventions and innovations.  These downsides suggest a role for government intervention to support the production, sharing, and use of ideas. The U.S. higher education system, which receives hundreds of billions of dollars per year in federal and state support, puts that theory into practice.

Research stemming from Romer’s work has shown how crucial higher education is to the production of ideas, and by extension, economic growth: 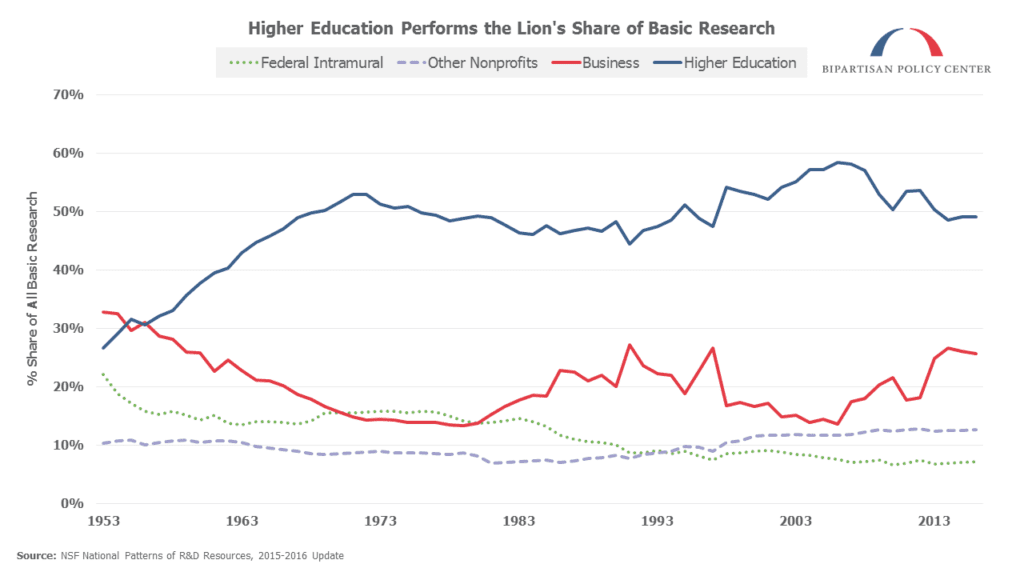 Romer’s model of idea-driven growth helps show how innovation and invention, driven by world-class universities, explain the U.S. economy’s dominance over the past century. But his Nobel Prize should also be a wake-up call for policymakers. Recent work suggests that ideas themselves are becoming harder to find in essence, original research is more difficult than it used to be. For example, over the past 50 years, processing power for computers has roughly doubled every 18 months. But continuing this trend today requires 75 times as many researchers as in the early 1970s. Because we’ve already achieved such high-speed processing, it is becoming more difficult to improve further. Similar trends can be seen in agricultural, medical, and semiconductor research.

This stagnation in ideas also partially explains part of a larger slowdown in economic productivity that has occurred in recent years, shown below for the manufacturing sector. 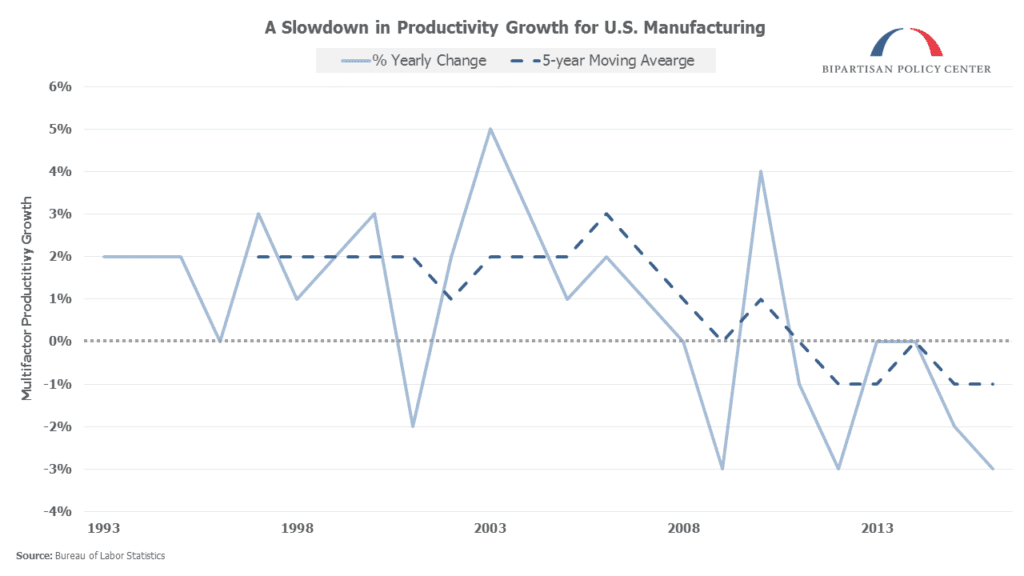 Research suggests that slow productivity growth will be amplified by dysfunctions in the postsecondary system, such as low completion rates and ballooning student debt. Romer’s work shows the importance of tackling these headwinds boosting higher education affordability, accessibility, and innovation can increase the supply of productive workers and the researchers necessary to generate new ideas. In a recent interview, Romer said:

“My number one recommendation is to invest in people. Humans that are well trained are the inputs into this discovery process. And there’s big opportunities still, I think, to do a better job of investing in people.”

BPC’s Task Force on Higher Education Financing and Student Outcomes is working to tackle these issues, recognizing that America’s higher education system is key to the future of the U.S. economy. Any fix must also make room for new models for postsecondary education that recognize the sector’s changing landscape.

Romer, himself an early innovator in online education, would likely agree. In his own words:

“If you look back in our history, we really benefited as a nation from subsidizing discovery and innovation and universities were a good way to do that. Universities have developed, I think, some wasteful features and I would like to shake things up a little bit.”

The Future of the U.S. Higher Education: Confronting Challenges in a Changing Landscape