Hurricane season presents annual challenges for several U.S. states and territories, however 2017 was especially difficult. While recovery in the continental U.S. is complex, restoring service to island territories has proven to be a tougher task.

Electricity grids are typically centralized and heavily interdependent systems. The vulnerabilities created by those characteristics are exacerbated in islands where fewer outside connections exist to provide power in the event of a system outage. In Puerto Rico, Hurricane Maria left 80 percent of the territory’s transmission system disabled and since recovery efforts have focused on restoring power to critical institutions such as hospitals, fire stations, and water treatment plants, more than 50 percent of the island’s 3.4 million residents are still without power. Transmission poles and other infrastructure must be fully replaced before remote communities can be reconnected to the grid, meaning some homes could be without power for another full year.

The U.S. Virgin Islands face similar challenges rebuilding after being hit by two separate category five hurricanes this season. A month after the second storm, a majority of the 106,000 residents were still without power but the local utility remains committed to their goal of restoring power to 90 percent of the U.S. Virgin Islands by December 25th.

The resulting crisis in Puerto Rico and the U.S. Virgin Islands raises important questions about how to best help those in disaster prone areas. The first priority must be restoring power to affected citizens, but strengthening energy infrastructure to ensure resiliency will be key to preventing such widespread outages in the future. With federal, state, and territorial funds severely constrained, it is imperative to balance meeting immediate needs while addressing long-term structural deficiencies.

The resulting crisis in Puerto Rico and the U.S. Virgin Islands raises important questions about how to best help those in disaster prone areas.

Microgrids are building blocks for a more resilient energy system and a promising piece of the solution. These modular, self-contained electrical systems function as stop-gaps in the larger grid but also operate as autonomous “islands” when needed. Microgrids have been effectively deployed to address the needs of remote communities where geography or harsh weather make reliable access to electricity challenging.

Energy access has been a persistent challenge for Alaska, particularly in rural parts of the state. Villages in remote areas of Alaska rely mostly on expensive diesel fuel, but harsh weather conditions or natural disasters can disrupt supply chains, cutting off fuel and power supply. Electricity prices in Alaska are more than double the national average across the continental United States and the state has the highest per capita energy consumption in the country. Many residents spend as much as 50 percent of their yearly income powering their homes, a crippling expense for households. Alaska’s solution for unreliable access to often expensive electricity has been to deploy hundreds of microgrids. 15 percent of the world’s microgrid projects are in Alaska. The ability of microgrids to “island” or operate independently from the larger grid means they can provide dependable energy to some of Alaska’s most isolated areas.

In 2010, the Village of Kongiganok began work on a wind- diesel hybrid smart microgrid with support from the Department of Energy’s tribal energy program. The village’s infrastructure project included building and installing smart meters (which provide a more accurate and automated record of energy consumption), thermal stoves in homes, and a microgrid that manages the flow of electricity generated from wind turbines. This more reliable and resilient energy system has also generated economic growth in a village with 29 percent of the population living under the poverty line. The microgrid has created new jobs and saved residents anywhere from 30 to 50 percent on energy and heating costs.

Looking forward, an electricity system with microgrids and energy storage capabilities will allow hospitals, shelters, airports, and other key services to keep running even if the larger grid goes down.

Funding grid reconstruction for these territories is a daunting task which further exacerbates the pressing challenge post-disaster of how to balance the immediate need for electricity with the imperative to build more resilient power systems. Still microgrid projects are already a part of ongoing recovery efforts in Puerto Rico.

In October, Tesla and its founder Elon Musk, built a solar powered microgrid to restore electricity to a children’s hospital on the island. In November “Solar for Puerto Rico” began an initiative to restore power to 55,000 homes in remote areas of the island through the use of solar-powered microgrids. These small projects can bring power back to places which would otherwise have to wait months to reconnect to the grid. Not only that, but in the future if damage to the grid sends outages cascading through the electrical system microgrids are able to detach and operate autonomously, serving as innovative resiliency measures in the rebuilt system. 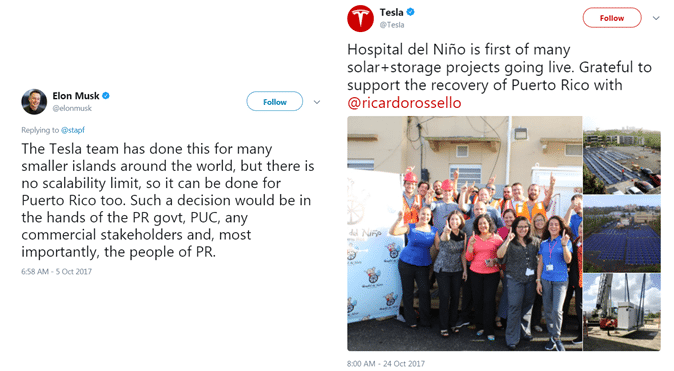 Elon Musk and Tesla Inc.’s engagement in the recovery efforts in Puerto Rico

Fostering more resilient electric power systems in areas where electricity is expensive, unreliable or provided by antiquated technology is difficult, but federal investment in Alaska’s local microgrid projects has created a blueprint for others to follow. Microgrid projects should be integrated into the larger grid restoration efforts in Puerto Rico and the U.S. Virgin Islands. Looking forward, an electricity system with microgrids and energy storage capabilities will allow hospitals, shelters, airports, and other key services to keep running even if the larger grid goes down. This aligns with the recent recommendations from the Puerto Rico Energy Resiliency Working Group comprised of stakeholders such as PREPA, DOE, and New York Power Authority who convened after Maria to support FEMA and Puerto Rico’s government in rebuilding the power grid. The group emphasized the need to transform the system to withstand future storms using modern technologies such as microgrids and energy storage. Rather than simply rebuilding the pre-existing systems, federal and local leaders should leverage new technologies to strengthen the resiliency of the islands against future disasters.

Puerto Rico and the Complicated Path to Disaster Recovery