As the nation’s economy tries to gain traction and build momentum, the Bipartisan Policy Center’s Housing Commission has released an infographic detailing the housing industry’s historical impact on economic growth. The graphic tracks private investment in housing in the wake of previous downturns, demonstrating that a robust housing industry helped drive the eventual recoveries. However, since 2008, the industry has made less than half its normal contribution to economic growth. 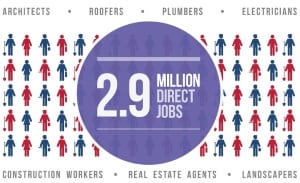 Based on the industry’s average share of Gross Domestic Product (GDP) from 1980 to 2007, the infographic illustrates that 2.3 percent or $350 billion is “missing” in potential growth.

The construction of new housing is an integral component of the economy. From 1980 to 2007, residential fixed investment, the Bureau of Economic Analysis’ measure of the economic value of new home construction and remodeling, contributed on average 4.5 percent to the U.S. GDP. During the boom years from 2004 to 2006, it constituted an even greater amount, peaking at 6.3 percent of GDP in the last quarter of 2005. However, when the housing bubble began to burst in 2007, new home construction’s share of GDP plummeted. As of the third quarter of 2011, residential fixed investment was only contributing 2.2 percent to GDP, 2.3 percentage points below its historical average. This suggests that the economy is, in effect, missing 2.3 percent of GDP because of the distress in the housing industry.

New home construction is a major generator of American jobs. According to a National Association of Home Builders analysis of government economic data, each new single-family detached home constructed supports 3.05 jobs and each new multifamily unit supports 1.16 jobs. Based on these multipliers and the latest available data on housing starts prepared by the U.S. Census Bureau, the current amount of construction is supporting an estimated 1.5 million jobs. However, the current level of housing construction, at an annual rate of 617,000 units, is well below the country’s long-term needs for housing. The Joint Center for Housing Studies at Harvard University has projected that the United States will need to add 16.4 million new housing units from 2010-2020, or 1.64 million units per year, to meet housing needs. If the number of housing starts were high enough to meet the projected demand, the housing industry would generate an estimated 4.4 million jobs, or 2.9 million more than it does currently.

If housing sector performance was at the industry average, economic output and economic growth could double. The housing industry’s share of GDP stands at 2.2 percent, 2.3 percent below its 1980-2007 average of 4.5 percent. If 2.3 percent translates to $350 billion in missing economic output, total GDP stands at roughly $15.217 trillion. Thus, at its current 2.2 percent contribution, the housing industry accounts for approximately $334 billion. At its historical average of 4.5 percent of GDP, the housing industry could be contributing approximately $684 billion in economic output. GDP increased at annual rates of 1.8 percent and 2.8 percent in the 3rd and 4th quarters of 2011. The mean of the last two quarters suggests 2.3 percent growth in total GDP in the second half of 2011, or roughly $350 billion. The missing housing contribution could represent a doubling of current economic output.

Data courtesy of RCLCO and the Bureau of Economic Analysis.

Housing's Impact on the Economy